Items related to Winter: A Novel of a Berlin Family

Deighton, Len Winter: A Novel of a Berlin Family

Winter: A Novel of a Berlin Family 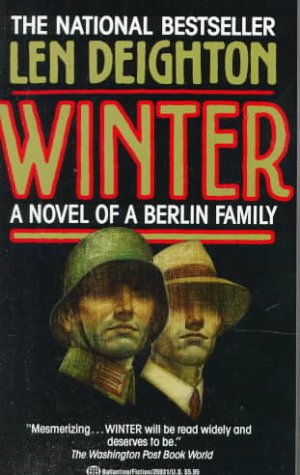 Peter and Pauli Winter are two very different brothers born into a time when the horrors of war engulf and extinguish the Germany that is. Yet for all their differences, the destinies of the two brothers are forever bound to the madness that lies ahead. From their sheltered childhood through their violent coming of age in the Great War . . . from the chaos of 1920 Berlin to the spreading power of Hitler . . . the brothers are wrenched apart by conflicting ideals and ambitions. Now mortal enemies, they are trapped in a holocaust that threatens to tear them -- and the world -- to pieces.

Born in London, Len Deighton served in the RAF before graduating from the Royal College of Art (which recently elected him a Senior Fellow). While in New York City working as a magazine illustrator he began writing his first novel, The Ipcress File, which was published in 1962. He is now the author of more than thirty books of fiction and non-fiction. At present living in Europe, he has, over the years, lived with his family in ten different countries from Austria to Portugal.

Modern history and suspenseful fiction are here brilliantly combined by a master of both. The plot revolves around two brothers, sons of a wealthy Berlin banker and his American wife, whose conflicting destinies are the means by which Deighton (Blitzkrieg, The Ipcress File) tells the story of Germany from 1900 to the end of World War II. Peter Winter, who flies zeppelins in World War I, becomes a staunch anti-Nazi and then a colonel in the American Army; Paul, charming, ambitious and psychologically flawed, becomes a top legal adviser to the Nazi regime. They finally confront each other at Nuremberg. Though Paul is not entirely convincing as a basically "nice" Nazi, who has conscience enough to save his brother's Jewish wife yet gives spurious legal sanction to Hitler's atrocities without a qualm, both he and his brother are handy pegs on which Deighton hangs accurate, exciting and cleverly selected dollops of social, political and front-line military history, while highlighting the tensions between Prussian and Bavarian, Wehrmacht and SS that hastened the nation's rush toward suicide. 100,000 first printing; BOMC alternate.
Copyright 1987 Reed Business Information, Inc.

1. Winter: A Novel of a Berlin Family

2. Winter: A Novel of a Berlin Family

3. Winter: A Novel of a Berlin Family

4. Winter: A Novel of a Berlin Family