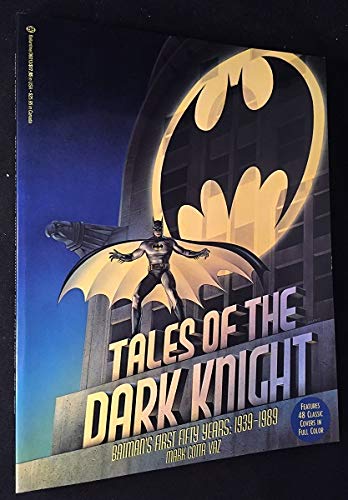 Traces, in text and illustrations, the evolution of the cartoon superhero through the fifty years since his creation, recording changes in his appearance and character and those of his enemies and profiling his many progenitors

Although they won't gain a critical assessment of the superhero genre, Batman fans will enjoy this detailed chronicle of the classic comic book, one of the few published continuously since its launch in the "golden age of comics." Created by Bob Kane in 1939 to capitalize on the then-new superheroecho ok?/yes/pk craze, Batman and his sidekick, Robin the Boy Wonder, have undergone many concept changes and redesigns. The author details the Batman story lines from the strip's pulp fiction beginnings through its do-good "scoutmaster" period in the 1940s; its preoccupation with alien invaders and science fiction themes in the '50s; the campy, lighthearted approach of the '60s, influenced by the hit TV show; a modernization of Batman's crime-fighting equipment in the '70s; and in the '80s, Frank Miller's enormously successful Dark Knight reinterpretation, which essentially returned to the characters' pulp roots and transformed Batman into a brooding--and savage--urban vigilante. The text by copyediting: use of both names correct?pk/i'd say yes/lk Cotta Vaz, a martial arts instructor and freelance journalist, is accompanied by reproductions of the artwork by Bob Kane and later artists like Dick Sprang.
Copyright 1989 Reed Business Information, Inc.

Thanks mostly to Frank Miller's recent Dark Knight graphic novels (e.g., Batman: The Dark Knight , Warner, 1987), this character has experienced a tremendous resurgence of interest. That, coupled with the 50th anniversary of Batman's debut in Detective Comics andthe release of the inane Hollywood production, is bound to make this title in high demand by patrons of all ages.-- MR
Copyright 1989 Reed Business Information, Inc.