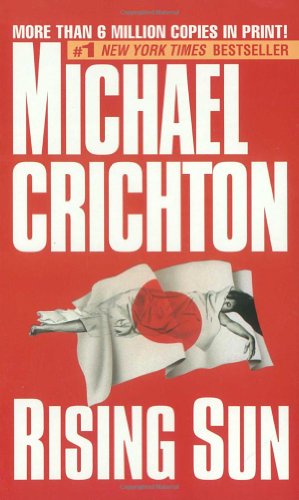 During the grand opening celebration of the new American headquarters of an immense Japanese conglomerate, the dead body of a beautiful woman is found. The investigation begins, and immediately becomes a headlong chase through a twisting maze of industrial intrigue and a violent business battle that takes no prisoners.

An official blurb would probably state how Crichton explores Japanese and USA business relations and uses a thriller storyline to make it interesting. I'll just say that this book had a profound affect on how I viewed American and Japanese cultures and I wasn't thrilled with either one. Some of the story will be dated by the current Asian financial crisis, but this still ranks as one of my favorite Crichton titles.

Michael Crichton’s novels include The Andromeda Strain, The Great Train Robbery, Congo, Jurassic Park, Rising Sun, Disclosure, and The Lost World. He was as well the creator of the television series ER. Crichton died in 2008.