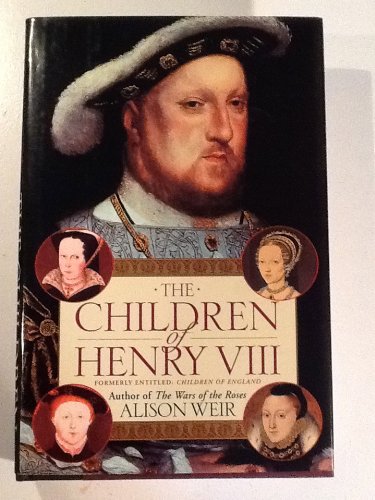 At his death in 1547, King Henry VIII left four heirs to the English throne: his only son, the nine-year-old Prince Edward; the Lady Mary, the adult daughter of his first wife Katherine of Aragon; the Lady Elizabeth, the teenage daughter of his second wife Anne Boleyn; and his young great-niece, the Lady Jane Grey. In her brilliantly compelling new book, Alison Weir, author of four highly acclaimed chronicles of English royalty, paints a unique portrait of these four extraordinary rulers, examining their intricate relationships to each other and to history.

Weir opens her narrative with the death of Henry and the accession of the boy king Edward VI. Often portrayed as weak and sickly, Edward, in fact had a keen intelligence and a flair for leadership. Had he not contracted a fatal disease at the age of fifteen, Edward might have become one of England's great kings. Instead, his brief reign was marked by vicious court intrigue that took the monarchy to the verge of bankruptcy.

Edward's death in 1553 plunged England into chaos, and it was in this explosive atmosphere that the ill-fated Lady Jane Grey was crowned Queen of England. A fragile, intellectual girl, Jane was only too happy to end her nine-day rule when the rioting English populace proclaimed Mary their true and rightful sovereign. Despite her innocence, Jane was brutally executed at the age of sixteen.

Mary's reign was marked by her savage persecution of heretics (non-Catholics) and by the emotional turbulence of her marriage to King Philip II of Spain. Weir describes the mounting tensions of the final days of Mary's bloody reign, as the shrewd, politically adroit Elizabeth quietly positions herself to assume royal power. The Children of Henry VIII closes with Elizabeth's accession and the commencement of one of the longest, and most spectacularly successful, reigns in English history.

Deeply engrossing, written with grace and clarity, The Children of Henry VIII combines the best of history and biography. Weir's devoted readers will recognize this as her finest book yet.

The royal family may have its problems these days, but as Alison Weir reminds us in this cohesive and impeccably researched book, the nobility of old England could be both loveless and ruthless. Weir, an expert in the period and author of a book on Henry's VIII wives, focuses on the children of Henry VIII who reigned successively after his death in 1547: Edward VI, Mary I ("Bloody Mary") and Elizabeth I. The three shared little--living in separate homes--except for a familial legacy of blood and terror. This is exciting history and fascinating reading about a family of mythic proportions.

Alison Weir succeeds in doing what very few writers of history ever have -- she makes it live. Her unraveling of the intricate intrigues and power-plays that surrounded Henry's unfortunate children Mary, Elizabeth and Edward -- and his young heir Lady Jane Grey reads like a suspense novel. This is history as it should be written.
--Margaret Sanborn/Publicity

Book Description Ballantine Books, 1996. Softcover. Condition: New. First American Edition; First Printing. This specific softcover book is in new condition with a cover that has sharp edges and corners and has a tight binding. The pages are clean, crisp, unmarked and uncreased. We package all books in custom cardboard book boxes for shipment and ship daily with tracking numbers.; "Deeply engrossing, written with grace and clarity, The Children of Henry VIII combines the best of history and biography."; 9.0 X 6.4 X 1.4 inches; 385 pages. Seller Inventory # 19325