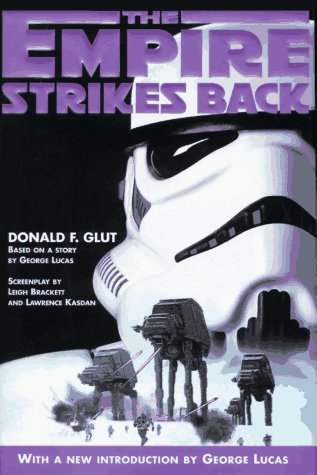 A long time ago in a galaxy far, far away, Luke, Han, and Princess Leia's story didn't end with the destruction of the Death Star....
Though they had won a significant battle, the war between the Rebel Alliance and the Empire had really just begun.
Now, several months later, the Rebels had established an outpost on the frozen wasteland of Hoth. But even on that icy, backwater planet, they could not escape the evil Darth Vader's notice for long.
Soon, Luke, Han, Princess Leia, and their faithful companions were forced to flee, scattering in all directions--with the Dark Lord's minions in fevered pursuit (

From the Rebels' defeat at the Battle of Hoth to the battle between Luke and Darth Vader, The Empire Strikes Back continues the story of Luke, Leia, Han, Chewie, and the others as they struggle to overthrow the evil Galactic Empire. This abridgment of the classic story is complemented by nearly 150 two-color illustrations--based on images from the film--drawn by Brandon McKinney in a style reminiscent of comic books from the 1950s. Star Wars fans of all ages will be delighted with this beautiful little gift book. --C.B. Delaney

Although they had won a significant battle, the war between the Rebels and the Empire had really just begun. Soon, Luke, Han, the princess and their faithful companions were forced to flee, scattering in all directions--the Dark Lord's minions in fevered pursuit....