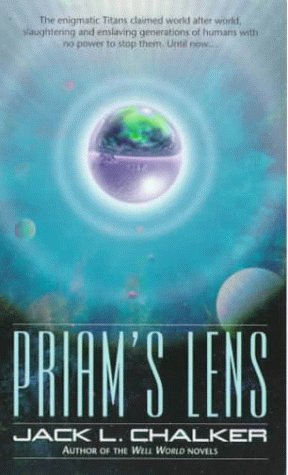 WORLDS OF NO RETURN

Humans had finally gone to the stars, as the dreamers had always hoped; celestial stretches of the galaxy became the playgrounds of a new spacefaring race. But now these worlds were being taken over by Titans, creatures with unimaginable, godlike powers, supremely indifferent to humanity's survival.

There was one chance to stop them. Helena, one of the Titan-dominated planets, concealed an untapped, hundred-year-old weapon--Priam's Lens. Getting to Helena would not be difficult, but activating the lens was another matter. No one had ever returned from a Titan encounter. They simply disappeared--status unknown.

Now a small ragtag crew made up of scientists, warriors, a priest, and a stowaway--naval officer Gene Harker--were ready to pit themselves against the greatest power in the universe. With the help of a mad space pirate, they descended upon the deadly planet. They will succeed--or die trying . . .

Jack L. Chalker was born in Baltimore, Maryland, on December 17, 1944. While still in high school, he began writing for the amateur science-fiction press, and in 1960 he launched the Hugo-nominated amateur magazine Mirage. A year later he founded Mirage Press, which grew into a major specialty publisher of nonfiction and reference books on science fiction and fantasy.

His first novel, A Jungle of Stars, was published in 1976, and he became a full-time novelist two years later with the major popular success of Midnight at the Well of Souls. Chalker is an active conservationist and enjoys traveling, consumer electronics, and computers. He is also a noted speaker on science fiction and fantasy at numerous colleges and universities. He is a passionate lover of steamboats, in particular ferryboats, and has ridden more than three hundred ferries in the United States and elsewhere.

The trouble with playing God is that the devil keeps popping up and spoiling the fun.

Humanity had grown and matured and finally spread outward to the stars as the dreamers had all hoped. Ancient Earth itself, birthplace of the race, was more a memory than a destination, and the starfields of an entire galactic arm had become the playthings of the new spacefaring race.

It had been a glorious time and, for humanity, a wondrous one, in which nationalism and tribalism had been almost vanquished; there was just "us," and occasionally "them," and when "us" met "them," well, "us" tended to win.

They called it the age of homo in excelsis, the Ascent of Man, master of all he surveyed, the future ever brighter ...
And then one day, the Titans showed up, kicked everybody in the ass, and that was that.

Even now, most people didn't know what those Titans, which was what others called them after a while, really looked like. They'd come from somewhere in the direction of the Zuni Nebula, but almost certainly from far beyond that. They'd come in ships of pure energy that traveled in ways none could comprehend--ships that shone from some inner light and occasionally throbbed or rippled along their energy skins but otherwise did nothing. Ships that looked like nothing less than enormous winged moths of heaven, and they did the most awful thing, the one thing that humanity could neither comprehend nor allow.

They totally ignored everybody.

They didn't answer any hails, they paid no attention to ships sent to contact them; they simply paid no attention. And when probes were sent, they were simply vaporized, not by conscious action but simply by being in contact with those great ships.

And when, even to get attention, the great weapons had been brought to bear on the newcomers' huge shining vessels, the weapons had simply vaporized, too. The energy weapons were either absorbed or deflected or simply ignored.

The Titans did, however, like humanity's planets. They liked them a lot, only they didn't like them the way they'd been remade.

Helena had been typical of the kind of planets they liked. It had a stable population of almost three billion people when the Titans arrived, and a thriving economy; its primary job of repairing and building great spaceships and refitting the powerful interstellar drives was vital to the continuation of the whole region of planets. Still, nobody there had worked too hard unless they wanted to, there was plenty of recreation, robotics did the heavy lifting, and it was, as was typical of many mature worlds, a pretty nice place to settle down, have families, and live life.

All that life, all that energy, was connected to a vast interstellar empire that made them all proud to be a part of it. This busy hub of activity was right in the center of things and it knew it.

And then the Titans noticed it, and descended on it, and all communication with Helena ceased. In a matter of days, not a single intelligible signal went in or out. Some ships got off and out of there right at the start, but they could tell no one anything about what happened after that. The other ships never rose again, and any ships coming in or near also simply went quiet and off the tracking boards.

It wasn't that others couldn't see what was going on there. As usual, the newcomers simply didn't pay any attention as long as you didn't get too close, in which case you became part of the project.

The great shining ships simply remade the planet into some sort of personal ideal. They did it as simply as humans could remake worlds in a virtual reality chamber, only they really did it.

The actual method of matter to energy and energy to matter conversion couldn't be divined; nobody had any instruments that could even measure it. But when it was done a world had been remade into a pastoral ideal. All traces of cities and road systems and any artifacts of humankind simply ceased to exist; even the air tested out as if no industrial activity had ever been there.

Of the people, it was hard to say. Scans showed hundreds of thousands of human beings still down there, having survived perhaps in shelters or cracks or perhaps by design, but there was no way to get to them, no way to find out what sort of life they might be managing in this idealized garden world. They probably would not starve; much of the vegetation was not alien or unknown but rather related to or based upon what had already been there, and the fresh water was probably about as pure as one could imagine.

But now there were millions, widely spread out, where before there had been billions. And they were stuck.

The three large continents of Helena now did have one new artificial thing each, though. On each, fairly close to the center of each land mass, one of the great moth ships had settled and, like the worlds they'd changed, each had metamorphosed into a shining multicolored structure that stretched out for a thousand kilometers, no two exactly alike, all clearly from the same sort of minds.

Minds that were not seen, but minds that had most definitely moved in and stayed. Minds that still allowed nothing out.

Wave upon wave of these new gods, these all-powerful Titans, had swarmed from the direction of the Zuni Nebula; world upon world, system upon system, met the same fate. The worlds were not uniform, but they all were quiet, pastoral, and each had every obvious trace of its former inhabitants removed, even if the Titans left some of those inhabitants there. It was impossible to guess what life down there was like, or whether the humans there now would still be recognized as human, or if they, too, had been changed.

Across the once cultivated fields of the western continent of Helena a figure ran through the incredibly tall grass that now covered the land, so tall and so strong that the winds rippled it like water; a sea, even an ocean, of grass stretched as far as a
With all the remaining energy in his aching body he moved as fast as he could up and along the steps and rock gradations toward that airflow. He actually made it most of the way, could almost see the entrance notch, when two small forms on either side of the path rushed out, one in front and one in back, and this time the nails drawn across his chest and back bit deeply and painfully into his flesh while spinning him around. He almost lost his balance and fell, but shock from his previous ordeal and adrenaline now kept him going, ignoring the pain, rushing for that notch and the open sky.

One of them dropped from the upper area right in front of him, and he pushed on right to it, now visible as a small shadowy shape, pushing at it with all his might. Twenty centimeters times four fingers worth of thick, sharp needle nails penetrated his abdomen, and more went through his crotch, penetrating and ripping at his scrotum. The pain was nearly unbearable, but the attacker was small and light enough that his sheer size and bulk carried him on, screaming in pain, walking right over the one who'd so wounded him and up, out, into the sunlight, into the warmth!

Bleeding, in agony, he nonetheless managed to get himself out of the crevice and onto the side of the rocky outcrop itself. He was wounded, perhaps mortally, but if he could just get down there, just get into the tall grass and lie down, at least they might not get his body!

A small naked form suddenly popped up right in front of him, a form so amazing to his sight that he stopped dead, staring, as she clicked those needles that she had for fingernails. There was a sound on either side of him, and he turned to see absolutely identical copies of this one in front of him crouched on either side, and he heard a fourth behind.

And with that the pack, who understood not a word, tore him to shreds and fought over the tastier internal organs.