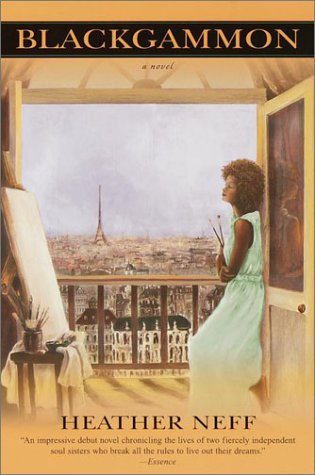 A sweeping, unforgettable debut novel that traces remarkable parallel voyages of self-discovery, Blackgammon reveals the intertwined lives of two African American women: soul sisters whose vow to stay true to one another will carry them through love, loss, and triumph on the way to finding out who they really are–and who they were meant to be. . . .

Legendary artist Chloe Emmanuel has been swept up into the seductive world of high fashion and art gallery intrigues in Paris. She’s so devoted to her craft that she can’t find room to love. A young idealist working in England, distinguished professor Michael Davies Northcross has modeled her life on the lies that Chloe has lived and now faces a crisis in her marriage. Unwilling to sacrifice the dreams they dared to make real, Chloe and Michael are forced to the limits of their strength and independence. They must gamble everything to recapture what they have lost . . . in a dazzling game called

An associate professor of English at Eastern Michigan University, Heather Neff is a graduate of the University of Paris (Sorbonne) and received her Ph.D. at the University of Zurich. Fluent in German and French, she also worked as a translator and as a language coach for film productions. Before returning to the U.S., she spent two years teaching at the University of the Virgin Islands.
From the Hardcover edition.

Understand this, Michael: There's no such thing as sanctuary.

When I finally fled, bolting up the house on the dawn of that icy New Year and just hours after you boarded the plane, I wasn't sure where I was going. I took a taxi down from the hills with only one bag of the barest essentials. Stood at the airport counter for what seemed a century, while an attendant studied the lists and finally said, "I'm sorry, Miss Emmanuel. The only available flight leaves for Paris in forty minutes." Paris, I thought. Well, of course.

I told myself that once I got there I'd go to the next counter and find a flight away from my past. But that wasn't going to happen. We were late leaving Nice. And everything out of the capital was booked. It was the end of the holiday, you see. I'd have only one choice--to go from gate to gate, like a beggar, and take my chances as a standby from despair.

So I gave up. Flew to Paris. Took the metro into the city. Emerged at the Gare de l'Est and walked (the direction completely beyond my control) the single block to the Canal Saint-Martin. Across the footbridge rose the steel-framed masterpiece of Anya's newly renovated factory. And there, to the north, lay the tomb of my past, waiting to be excavated. Waiting to be revealed. It took me exactly four hours to find out that the building was still standing, and now belongs to the city.

It took me exactly forty-two minutes to walk into a clerk's gray office and sign an open-ended lease. And it took me even less time to bang my one bag of barest essentials up the circular staircase, turn the bony key in the rusting lock, and walk inside.

It was amazingly unchanged after twenty-four years. Still damp and cold and still badly in need of paint. Not that the walls weren't Pollocked with droplets from a thousand vanished masterpieces, the earnest attempts of supplicants to the high altar of Art. Like me, they prayed that they could pierce the chrysalis of their doubt and emerge as artists. Artist: as if Art and Exist could become consummate in something as densely inept as a human being! Behold the shadowy studio lit by a skylight; the small kitchen and black-veined bath. Behold the tight bedroom with its stained mattress.

Behold the cracked mirror, broken easel, and the red-brown smear on the wall. I listened for echoes of voices raised in rage. I looked for traces of my tears on the splattered floor. But no, there had been joy in that room as well, even though sometimes the joy was hard to remember.

That's one of the trickier aspects of being Chloe Emmanuel.

Another is living up to my reputation as the "Preeminent Black Artist in Europe." For many years I've woven a cat's cradle through Paris, Berlin, Madrid, Vienna. I've lived in Florence and Belgrade, Stockholm and Amsterdam. I've been critiqued in books; I've taught at academies. I have works in six national museums and countless galleries. Rich girls learn about me when they take Introduction to Art History.

Sometimes it's hard to live up to my public persona. It's become even more difficult now that I can't paint anymore.

Oh, it began quietly. First, a gnawing sense of dissatisfaction that made me work for months on a single portrait. Then, a complete inability to discern subtle differences in shading. Finally, I felt a smothering certainty that all the work I'd ever done amounted to little more than painful scratchings. The grace that infused my brushes for so many years left them barren. My house grew silent with the solitude of untouched canvases.

And although the evidence was there for everyone to see, no one--not even you, Michael--realized that Chloe Emmanuel was finished.

So it was somehow fitting that twenty-five years after I abandoned the States, New York came calling. The prestigious Humes Gallery would virtually be mine, with an apartment, interviews, even a post at my old alma mater. The prodigal daughter of African descent would return from a quarter century of European exile to be welcomed by her great, loving motherland. I could imagine the hype: Black Artist Conquers the Old World, Then Returns to Master the New! I could even see Malik showing up at the airport with a dozen long-stemmed roses, hoping to get some positive spin out of our doomed marriage.

How could I tell them that I was no longer a child of those dizzying urban streets? No longer molded from the pop rhythms and political slogans and social movements of their culture. Long ago I had climbed off that train, smashing myself through the sieve of Paris, then vanishing into the strange incubation of a house in the hills of Nice with a view of the sea. I couldn't tell them that after so much success, the scaffolds on which I constructed my art had collapsed. I could no longer sculpt.

I could no longer paint. The artist they were ready to honor no longer existed!

So despair brought me back to Paris. Back to the very room where my artist's life began. For weeks I rarely left my empty cell. I crouched beneath the skylight watching winter flay the world. Food meant nothing; drink even less. I cut off my hair so I wouldn't have to comb it. My clothes grew bitter and stiff with my silent tears.

It took me many weeks to find the courage to try again. Furtively, I brought a handful of tubes into the chamber. Days later I managed a few brushes. Then came the frames. And at last, the canvas.

Finally I stood naked beneath the skylight. I studied my scarecrow body in the dull, blackened mirror. With gently trembling hands I placed a canvas on the easel, and, ignoring the mocking laughter that raced through my head, I lifted a brush to the taut, young fabric. Maybe, I prayed, it hasn't left. If I can face the woman in the mirror, maybe I'll be able to--

And then I caught my reflection in the pane of hard light. How could I dare touch that canvas? I'm hollow. Brittle. Ridiculous.

"Chloe? Tu es la?" The words leapt cruelly from an unswept corner of my past. "Chloe. It's me. Open the door." No! Impossible. How could he have found me? And here, of all places!

I didn't move, hoping (as I'd hoped so many years before) that he'd think the room was empty. "Chloe, I want to talk to you." I didn't want to see him. I couldn't bear for him to see me. And yet, the very sound of his voice reminded me that there was nothing left but Lucien.

Soon he was standing beneath the Vermeer light, his hair a rough white halo. He was vested in cashmere over gray wool, and his eyes retained their ironic wariness, the teasing tension that so attracted his prey. Yes, that once snared even me.

"How in the hell did you find me?"

"Hunter's luck, I guess." He scoured the room--the haunted stage of our great tragedy--with the same precision as on that first night, a quarter century before. His vulpine gaze took in the mosaic of my empty cavern; shabby clothes; and scissor-sheared, rough, graying hair.

"You look very well, Chloe." (He lied so easily!) "You haven't worn your hair this short since Aix."

"That's right. I buried that version of myself a long time ago."

He raised an eyebrow, preparing to charm, but I thought I'd keep it tight.

"Why are you in Paris, Lucien?"

"A sales contract. A holding company out of Brussels wants to import Tunisian olive oil through a warehouse in Marseilles. Of course"--his golden eyes held mine--"it's suicide to represent three nations that speak different versions of the same language."

He paused, perhaps to let me appreciate his enduring beauty. "Why are you in Paris, Chloe?"

"Isn't it obvious that I'm in hiding?"

I stared at him in silence. Lucien and I had not spoken to each other for months. We hadn't met for over a year. And many lifetimes had passed since the hundred days that we were lovers.

But now his manner shifted and his voice softened. "I'm selling my business," he explained. "I've bought a farmhouse in Villefranche, near the sea. I think we should try to finish what we started so many years ago. After all, Chloe, I've never really loved anyone but you."

Slowly I began to smile, feeling the smile bloom into a grin and then explode into laughter. I dropped my head into my hands and laughed even longer. He watched me guardedly.

"Excuse me, Lucien," I said, wiping my eyes. "It's just that I've never heard anything quite so sad."

His expression sharpened; he always enjoyed the game. "Would it be so difficult for you to trust me, even after all this time?"

"It wouldn't be difficult," I replied. "It would be masochism." He exhaled slowly. "I'm staying at the Meurice. Give it some thought, and we'll talk before I leave." "Lucien," I said as he reached the door, "don't tell anyone you found me."

After he left I walked slowly to the virgin canvas and stared into the deepest whiteness of my life.

I didn't really think Emil would want to see me, but instinct replaces reason in desperate times. And I certainly was desperate.

So I let the shower strip me. I smoothed my rebellious kinks into a semblance of civility, and unearthed something clean to wear. To my astonishment, winter had vanished and the world outside was reeling in a patchouli of warm asphalt and hyacinth. Bubbling with ecstatic children, the Parc des Buttes-Chaumont led me down to the Avenue Jean Jaures, where I turned west toward the boulevard Rochechouart. Soon I was absorbed into the throng of black Paris, a roaring market of saltfish and plantains, cowrie shells, and Ghana plaids. Up ahead, beneath the raised metro trac...