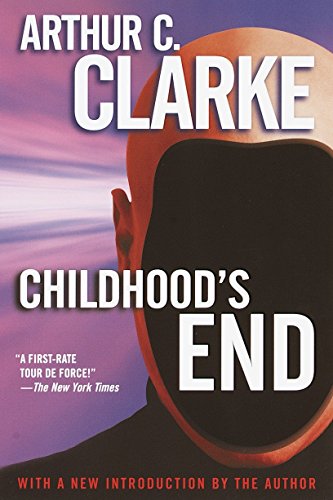 The inspiration for the Syfy miniseries.

Childhood’s End is one of the defining legacies of Arthur C. Clarke, the author of 2001: A Space Odyssey and many other groundbreaking works. Since its publication in 1953, this prescient novel about first contact gone wrong has come to be regarded not only as a science fiction classic but as a literary thriller of the highest order.

Spaceships have suddenly appeared in the skies above every city on the planet. Inside is an intellectually, technologically, and militarily superior alien race known as the Overlords. At first, their demands seem benevolent: unify Earth, eliminate poverty, end war. But at what cost? To those who resist, it’s clear that the Overlords have an agenda of their own. Has their arrival marked the end of humankind . . . or the beginning?

“There has been nothing like it for years; partly for the actual invention, but partly because here we meet a modern author who understands that there may be things that have a higher claim on humanity than its own ‘survival.’ ”—C. S. Lewis

“As a science fiction writer, Clarke has all the essentials.”—Jeremy Bernstein, The New Yorker

CHILDHOOD'S END and 3001: FINAL ODYSSEY
A couple of years ago, at the national television syndication convention, I was chatting with Stan Lee (of Marvel Comics). He was asking me what was up at Del Rey, and I mentioned 3001: FINAL ODYSSEY, as well as the new mass market edition we'd just done of CHILDHOOD'S END. Stan stated enthusiastically that, if there was one thing he most wanted to do in this world, it was make a movie of CHILDHOOD'S END, one of his favorite novels. He apparently loves Clarke's work.

So when I got back to the office, I dropped a copy of the two books into the mail. About a week later I was listening to my lunchtime voice mail messages, and there were Stan's unmistakeable tones, sincerely thanking me for the books. This guy deals with the James Cameron's of the world, yet a gift of Arthur C. Clarke causes him to make the time to express his gratitude.

But at what cost? With the advent of peace, man ceases to strive for creative greatness, and a malaise settles over the human race. To those who resist, it becomes evident that the Overlords have an agenda of their own. As civilization approaches the crossroads, will the Overlords spell the end for humankind . . . or the beginning?