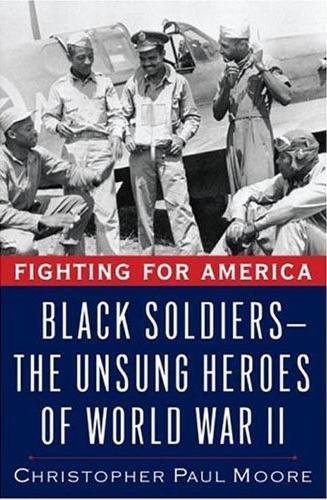 The African-American contribution to winning World War II has never been celebrated as profoundly as in Fighting for America. In this inspirational and uniquely personal tribute, the essential part played by black servicemen and -women in that cataclysmic conflict is brought home.

Here are letters, photographs, oral histories, and rare documents, collected by historian Christopher Moore, the son of two black WWII veterans. Weaving his family history with that of his people and nation, Moore has created an unforgettable tapestry of sacrifice, fortitude, and courage. From the 1,800 black soldiers who landed at Normandy Beach on D-Day, and the legendary Tuskegee Airmen who won ninety-five Distinguished Flying Crosses, to the 761st Tank Battalion who, under General Patton, helped liberate Nazi death camps, the invaluable effort of black Americans to defend democracy is captured in word and image.

Readers will be introduced to many unheralded heroes who helped America win the war, including Dorie Miller, the messman who manned a machine gun and downed four Japanese planes; Robert Brooks, the first American to die in armored battle; Lt. Jackie Robinson, the future baseball legend who faced court-martial for refusing to sit in the back of a military bus; an until now forgotten African-American philosopher who helped save many lives at a Japanese POW camp; even the author’s own parents: his mother, Kay, a WAC when she met his father, Bill, who was part of the celebrated Red Ball Express.

Yet Fighting for America is more than a testimonial; it is also a troubling story of profound contradictions, of a country still in the throes of segregation, of a domestic battleground where arrests and riots occurred simultaneously with foreign service–and of how the war helped spotlight this disparity and galvanize the need for civil rights. Featuring a unique perspective on black soldiers, Fighting for America will move any reader: all who, like the author, owe their lives to those who served.

CHRISTOPHER MOORE is curator and research historian for the New York Public Library’s world-renowned Schomburg Center for Research in Black Culture. He is coauthor of The Black New Yorkers: 400 Years of African American History, Standing in the Need of Prayer: A Celebration of Black Prayer, and Santa and Pete: A Novel of Christmas Past and Present (which became a CBS TV movie starring James Earl Jones). A specialist in African-American history, Moore wrote and produced the History channel’s award-winning television special The African American Burial Ground: An American Discovery. He lives in Brooklyn with his wife and two children. Visit the author’s website at www.fightingforamerica.org.

I once had a conversation with historian Stephen Ambrose, who was
gracious enough to listen quietly as I made a complaint about the movie
Saving Private Ryan. Ambrose had served as consultant on the movie, and
so I asked him why black soldiers had been left out of the D-Day
invasion. He told me he had provided the filmmakers with information
about several hundred blacks at Utah and Omaha Beach on D-Day, but that the story was taken in a “different direction.” Among the ablest historians of World War II, Ambrose believed that racism was at the heart of Nazi philosophy, and that its arteries extended to many nations, including our own. He assured me that military historians were taking a fresh look at the subject and that Americans would come to learn and appreciate more about the contributions of African-American soldiers throughout American history.

On the night of March 5, 1770, Crispus Attucks, a free black
dockworker, marched together with fifty laborers and sailors into a
dangerous confrontation with British soldiers, whose presence in Boston
was sharply resented. The soldiers fired into the crowd and Attucks
fell instantly, becoming the first of five men to die that night.
American patriots hailed Attucks’s heroism and declared the Boston
Massacre the event that sparked the American Revolution.

In January 1776, Gen. George Washington finally lifted a prohibition
against black enlistment in the Continental Army, thus opening the
ranks to free black men. Some colonies also allowed slaves to win their
freedom by serving the American forces. Between 5,000 and 8,000 blacks
fought for the patriot cause. At the climactic Battle of Yorktown,
about a quarter of Washington’s Continental Army was made up of black
soldiers. More than 10,000 enslaved men, women, and children also
provided labor for the Americans, transporting munitions, provisions,
and constructing fortifications and barricades in the Thirteen
Colonies. Interestingly, many enslaved Americans took advantage of a
British offer of freedom in return for military service, and more than
20,000 slaves fought and labored for the British side during the war.

By the time of the War of 1812, federal law restricted militia service
to “free and able-bodied white citizens,” and the U.S. Army and Marine
Corps did not permit blacks to enlist. Although free blacks and slaves
did fill support roles as laborers and teamsters in army camps, the
navy was the only service that officially admitted blacks in a fighting
capacity. Black troops served at the Battle of Lake Erie and at the
Battle of New Orleans, under the command of Gen. Andrew Jackson,
although they were excluded from later parades commemorating the New
Orleans victory.

From the opening salvo of the Civil War, thousands of free blacks and
fugitive slaves volunteered for the Union Army, only to be denied
service by President Lincoln, who maintained that the war was being
fought to restore the Union, not to end slavery. Believing the war
would be short-lived and the Union successfully restored, Lincoln
prohibited black soldiers from the Union ranks in order to avoid
angering his own border states, Delaware, Kentucky, Maryland, and
Missouri, where slavery was still protected by the Constitution.

However, as the war dragged on, President Lincoln’s slavery policy (or
strategy) changed profoundly. On September 22, 1862, he issued a
preliminary Emancipation Proclamation, which effectively warned that if
the South did not end its rebellion within 100 days (by January 1,
1863) all slaves in the South were to be freed. The edict also
permitted former slaves and northern blacks to enter the armed
services.

On July 18, 1863, the Massachusetts 54th, the first all-black regiment
organized in the North, fought courageously during an attack on Fort
Wagner in South Carolina. Though underpaid and often assigned hard
labor, black men signed up by the thousands. Volunteers from South
Carolina, Tennessee, and Massachusetts filled the first authorized
black regiments. By the end of the Civil War, about 179,000 black men
served as soldiers in the Union army (comprising 10 percent of that
force), and another 19,000 served in the navy.

On April 9, 1865, at the Appomattox Court House, twelve “colored”
regiments, or about 3,500 black soldiers, stood guard outside along
with white Union soldiers as Gen. Robert E. Lee surrendered to Gen.
Ulysses S. Grant. About 38,000 black soldiers died during the war. With
nearly eighty black commissioned officers, black soldiers served in
artillery and infantry and performed support functions that sustained
the army. Black carpenters, blacksmiths, cooks, laborers, teamsters,
nurses, scouts, spies, steamboat pilots, and surgeons also contributed
to the war cause. Black women, who were not formally allowed to join
the army, served as nurses, spies, and scouts–among them, Harriet
Tubman, the Union’s most famous scout.

So impressed were American military commanders by the bravery and valor of the Union’s black soldiers that in July of 1866, the first black post—Civil War regiments came into existence by an act of Congress, approved by President Andrew Johnson. By April 1867, six regiments of African-American soldiers were recruited into the regular peacetime army. Many were veteran United States Colored Troops from the Civil War, but among them were also newly freed slaves who wanted to serve
their country. Organized as the 9th and 10th Cavalry and the 38th through 41st Infantries, each regiment consisted of approximately a thousand men. In 1869 the infantry regiments were consolidated into two, the 24th and 25th. All four regiments–two of cavalry and two of infantry–were sent to the western frontier to fight in the Indian wars.

In the winter of 1867—68, the newly formed 9th and 10th Cavalries were
engaged in Gen. Philip Sheridan’s campaign against the native Comanche,
Kiowa, and Cheyenne in Texas and the western Oklahoma Territory. In the cold, harsh winters, the black soldiers wore coats made of buffalo hides. On account of the appearance of those coats and their own tightly curled hair, the Indians called them the “Buffalo Soldiers.” According to legend, it was the fighting spirit of the black soldiers that reminded the Native Americans of the bison, and the soldiers accepted the name as a term of honor and respect. About twenty years later, when designs for regimental coats of arms were being prepared, the 9th Cavalry adopted a galloping Indian-on-a-pony as its emblem, and “We Can, We Will” as its motto. The 10th Cavalry took the buffalo as its crest, and “Ready and Forward” became its motto.

Their duties were not limited to fighting. Known as “guardian angels,”
the Buffalo Soldiers protected frontier towns and farms, wagon trains,
stagecoaches, and Pony Express riders. Guarding railroad work crews and
cattle herds, the black troops also built and repaired frontier forts
and outposts. Stringing hundreds of miles of telegraph lines, they
explored and mapped vast areas of the Southwest, and helped develop the
early national parks. In garrison, the Buffalo Soldiers drilled, stood
guard, and maintained horses, weapons, and equipment. Serving
fifty-nine forts of the Old West, the black regiments developed into
four of the most distinguished fighting units in the army during the
remainder of the nineteenth century. Though completely overlooked in
Hollywood’s glamorization of the cavalry-to-the-rescue myth, black
soldiers made up over 20 percent of the cavalry engaged in the Indian
wars, fighting in 85 percent of the Indian battles.

In 1877, Henry O. Flipper became the first African American to graduate
from the United States Military Academy at West Point. Promoted to lead
a 10th Cavalry unit, he saw his promising career ended in 1881 with a
dishonorable discharge. His commanding officer had charged him with
embezzling $3,791.77 from commissary funds. Flipper denied the charge,
claiming he was framed by white officers who disliked him because of
his color. A court-martial cleared Flipper of the embezzlement charge
but convicted him of conduct unbecoming of an officer and ordered him
dismissed from the army. He died in 1940 without vindication. In 1976
the U.S. Army changed his discharge to honorable and a pardon issued by
President Bill Clinton in 1999 completely cleared Flipper’s name.

On the seas, Capt. Michael A. Healy, the highest-ranking black officer
in the Revenue Cutter Service (precursor to the U.S. Coast Guard)
commanded the cutter Bear from 1887 to 1895. In charge of patrolling
Pacific waters from San Francisco to the Aleutian Islands, Captain
Healy was considered by many the best sailor of the North Pacific.
Commended by the U.S. Congress for his seafaring skills, an article in
the January 28, 1884, New York Sun termed the black captain among the
world’s best seamen: “Captain Mike Healy is a good deal more
distinguished person in the waters of the far Northwest than any
president of the United States or any potentate in Europe has yet
become.”

By the 1890s, Native Americans had been defeated and confined to
reservations. On February 15, 1898, the battleship Maine exploded in
Havana harbor and twenty-two Buffalo Soldiers were among the 266
fatalities. Again, the U.S. Army’s four black regiments were sent to
war, distinguishing themselves in the ten-month-long Cuban campaign. In
the famous charge up San Juan Hill, the black cavalrymen saved...