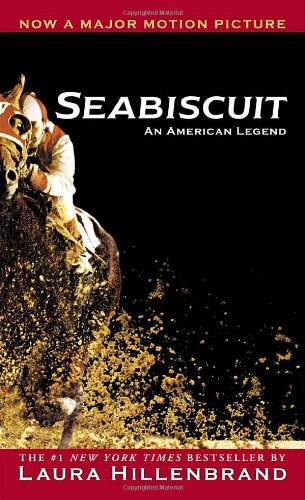 Seabiscuit was one of the most electrifying and popular attractions in sports history and the single biggest newsmaker in the world in 1938, receiving more coverage than FDR, Hitler, or Mussolini. But his success was a surprise to the racing establishment, which had written off the crooked-legged racehorse with the sad tail. Three men changed Seabiscuit’s fortunes:

Charles Howard was a onetime bicycle repairman who introduced the automobile to the western United States and became an overnight millionaire. When he needed a trainer for his new racehorses, he hired Tom Smith, a mysterious mustang breaker from the Colorado plains. Smith urged Howard to buy Seabiscuit for a bargain-basement price, then hired as his jockey Red Pollard, a failed boxer who was blind in one eye, half-crippled, and prone to quoting passages from Ralph Waldo Emerson. Over four years, these unlikely partners survived a phenomenal run of bad fortune, conspiracy, and severe injury to transform Seabiscuit from a neurotic, pathologically indolent also-ran into an American sports icon.

Author Laura Hillenbrand brilliantly re-creates a universal underdog story, one that proves life is a horse race.
From the Hardcover edition.

He didn't look like much. With his smallish stature, knobby knees, and slightly crooked forelegs, he looked more like a cow pony than a thoroughbred. But looks aren't everything; his quality, an admirer once wrote, "was mostly in his heart." Laura Hillenbrand tells the story of the horse who became a cultural icon in Seabiscuit: An American Legend.

Seabiscuit rose to prominence with the help of an unlikely triumvirate: owner Charles Howard, an automobile baron who once declared that "the day of the horse is past"; trainer Tom Smith, a man who "had cultivated an almost mystical communication with horses"; and jockey Red Pollard, who was down on his luck when he charmed a then-surly horse with his calm demeanor and a sugar cube. Hillenbrand details the ups and downs of "team Seabiscuit," from early training sessions to record-breaking victories, and from serious injury to "Horse of the Year"--as well as the Biscuit's fabled rivalry with War Admiral. She also describes the world of horseracing in the 1930s, from the snobbery of Eastern journalists regarding Western horses and public fascination with the great thoroughbreds to the jockeys' torturous weight-loss regimens, including saunas in rubber suits, strong purgatives, even tapeworms.

Along the way, Hillenbrand paints wonderful images: tears in Tom Smith's eyes as his hero, legendary trainer James Fitzsimmons, asked to hold Seabiscuit's bridle while the horse was saddled; critically injured Red Pollard, whose chest was crushed in a racing accident a few weeks before, listening to the San Antonio Handicap from his hospital bed, cheering "Get going, Biscuit! Get 'em, you old devil!"; Seabiscuit happily posing for photographers for several minutes on end; other horses refusing to work out with Seabiscuit because he teased and taunted them with his blistering speed.

Though sometimes her prose takes on a distinctly purple hue ("His history had the ethereal quality of hoofprints in windblown snow"; "The California sunlight had the pewter cast of a declining season"), Hillenbrand has crafted a delightful book. Wire to wire, Seabiscuit is a winner. Highly recommended. --Sunny Delaney

“Fascinating . . . Vivid . . . A first-rate piece of storytelling, leaving us not only with a vivid portrait of a horse but a fascinating slice of American history as well.”
–The New York Times

“Engrossing . . . Fast-moving . . . More than just a horse’s tale, because the humans who owned, trained, and rode Seabiscuit are equally fascinating. . . . [Hillenbrand] shows an extraordinary talent for describing a horse race so vividly that the reader feels like the rider.”
–Sports Illustrated

“REMARKABLE . . . MEMORABLE . . . JUST AS COMPELLING TODAY AS IT WAS IN 1938.”
–The Washington Post
From the Trade Paperback edition.