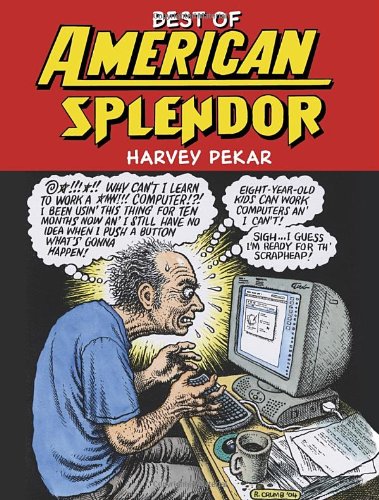 Experience the heartwarming all-American story of a crank and his comic book.

What’s a file clerk from Cleveland doing with an Oscar nomination? How did a movie about Harvey Pekar win the Grand Jury Prize at the 2003 Sundance Film Festival? The story begins in 1976, when Harvey began publishing his autobiographical, slice-of-downtrodden-life comic book series American Splendor, illustrated by a who’s who of underground comic artists, including R. Crumb, Kevin Brown, Greg Budgett, Sean Carroll, Sue Cavey, Gary Dumm, Val Mayerik, and Gerry Shamray. After self-publishing American Splendor for nearly two decades under less than splendid conditions (and racking impressive accolades in the process), Harvey finally got a break when Dark Horse Comics took over the publication in the early 1990s. It was an opportunity for Harvey to reach a wider audience–which, as it turned out, included a few Hollywood types, too. (Who knew?) But that’s another story. . . .

Now we are happy to bring you the Best of American Splendor, a collection of some of Harvey’s greatest work. Harvey Pekar has been compared to Theodore Dreiser, Fyodor Dostoevsky, and Lenny Bruce, but this collection is a true American original. Just like Harvey.

Harvey Pekar, retired hospital file clerk and music critic, is best known for his autobiographical slice-of-life comic book series American Splendor, a first-person account of Pekar's downtrodden life. Robert Crumb has known Harvey for years, and contributes a cover to this collection. Other artists in the book include Joe Sacco, Frank Stack and Gary Dumm.

“Pekar lets all of life flood into his panels: the humdrum and the heroic, the gritty and the grand.”
–The New York Times Book Review
“[Pekar] has a vision that makes daily city life–a ride on the bus, a run-in with a boss, or simply buying bread–dramatic.”
—Chicago Sun-Times