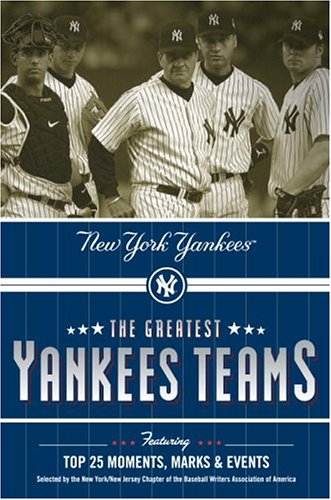 The Greatest Yankees Teams updates One Hundred Years, The New York Yankees, The Official Retrospective a stunning collection of stories, facts and images of the most celebrated team in the history of professional sports.

From the unbeatable record-breaking 1927 Yankees managed by Hall of Famer Miller Huggins to the ongoing legacy of Joe Torre, the book also details the team’s latest tribulations, including its 2003 Series loss and the “trade of the century” that brought Alex Rodriquez to New York and opened the next chapter in Yankees history.

A must-have keepsake for every fan, this lavishly illustrated tribute includes the Yankees’ greatest moments, marks, and events as voted by the New York–New Jersey Chapter of the Baseball Writers Association of America. From those early magnificent days in the House That Ruth Built to the George Steinbrenner era of more than three decades of unprecedented excellence, here is an inimitable portrait of America’s team.


“You feel the history every time you walk into Yankee Stadium.
twenty-six championships. There are signs all over the place.
when we run into Yogi Berra in the clubhouse, that’s 10
championship rings right there. Think about that for a minute
—10, just as a player. I won four in my first five seasons here,
and I thought that was the only way it could be. It’s actually
pretty hard for most guys even to get one title.

“Right now, I do what I can to help the Yankees get that next
championship. Everyone expects us to win, and we expect no
less of ourselves. With the Yankees, whether it’s the fans, the
front office, the owner, whatever—we’re held to the highest
standard. Nobody’s tougher on us than we are on ourselves...

“I consider myself fortunate to have spent my whole career in
pinstripes. When I’m old and retired, I’ll probably look back
on this time here, and go, ‘Wow! That was really something.”
—Yankees captain Derek Jeter, 2004