Items related to The Devious Book for Cats: A Parody

The Devious Book for Cats: A Parody 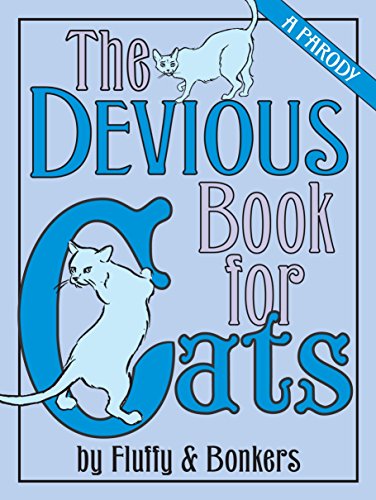 Cats have nine lives. Shouldn’t they be lived to the fullest?

“Domesticated” does not mean “docile.” The ho-hum routine of sleep, eat, eat, and sleep is no way for any creature who ruled Egypt for a millennium to spend her day. It’s high time felines everywhere woke up from their cat naps and grabbed life’s strings with both paws.

The Devious Book for Cats offers today’s discerning kitties words of wisdom and advice on everything they need to know, from in-depth guides on cardboard boxes and catnip to a brief history of the Felinism movement. It provides fail-safe tips on waking a human when you want to get fed, choosing the purr-fect gift, staring like a pro, and making the most of superstitions. It also explains the undeniable allure of the Window, the terrifying specter of the Vacuum, and how you can groom properly in just the scant twenty-four hours allotted each day.

Cats: Discover the devious fun you can have when you’re the one in charge!

Fluffy and Bonkers wrote this parody without authorization, because since when did a cat need permission for anything?

Reasons You Meant to Do That

In the human world, there is a thing called a "mistake." There’s no exact translation in the feline language, but it basically means doing something you did not intend to do. The concept is quite confusing to cats since everything we do is done both correctly and on purpose. There are occasions, however, when our actions appear to resemble one of these so-called "mistakes" to humans, and this coincidence often produces accidental mis­communications. In the event of such a mix-up, you should have some prepared statements ready in order to avoid an incorrect interpretation of your actions.

"Mistake": Your head is stuck in a beer mug.
Reason: Bavarian cats have long known that sleeping in dewy beer steins can refresh and smooth the coat. The hops, malt, and barley also pro­vide an aromatic masking agent for mousing. Plus, there’s nothing wrong with a little nightcap.

"Mistake": You slammed head­first into a screen window.
Reason: There was a bug–a huge, megabug–right between your eyes that just wouldn’t get off. Well, it’s off now, isn’t it? What’s more, a powerful and graphic message that your face is strictly off-limits has been sent to the bug community.

"Mistake": You leapt from the loveseat to the television, but rather than landing on top, continued sliding off the set.
Reason: That "slip" was a symbolic act of civil disobedience. The grip multinational conglomerates have over the airwaves has reached a critical mass. Lack of competition in Big Media has made quality programming all but obsolete. Your slide was meant to be a physical representation of the slippery slope we tread when we permit the corporate monopolization of entertainment, which creates an uninformed, intellectually lazy, and generally apathetic populace. If your person didn’t get that, it just proves the point.

"Mistake": While stretching out on the couch, you rolled off the cushions and fell to the floor.
Reason: After spending all day licking your claws, you didn’t want to ruin their lus­ter by getting them caked in the thick layer of dust your person allowed to build up in the rug.

"Mistake": You slipped into the fish tank.
Reason: Those neon tetras, angelfish, and dopey zebrafish were taunting you all day. What appeared to your person as an unintentional dip was in fact a carefully choreographed move designed to instill shock and awe in your fishy foes. Now they know they’re not even safe in their castles and treasure chests; if pushed to the limit, you won’t hesitate to get wet.

"Mistake": You’re swinging around from a ceiling fan at 180 rpm.
Reason: Look, you’re a busy cat with better things to do than wait around and air-dry after your dip into the fish tank. Clinging to a fan blade allows you to dry quickly and get on with the day. Staying damp for any longer is tantamount to letting the fish win.

"Mistake": You played an un­structured, unmelodic scherzo on the piano.
Reason: That seemingly anarchic piece was actually the third movement of your free jazz symphony.

"Mistake": Rather than walk down a staircase, you tumbled down without your paws ever making stable contact with any one individual stair.
Reason: Oh, does your person still make sure to step on every stair? That’s so . . . quaint. Apparently the efficient practice of stair-sliding has not spread to the world’s more pedestrian species.

"Mistake": You wandered into the reptile house at the Topeka City Zoo and have been swallowed whole by a Burmese python.
Reason: You’re following up on a tip that the python ingested an awesome toy that was dropped in the exhibit. Once you retrieve it, you’ll just set off the firecrackers you brought along and stroll out of the serpent’s gullet without receiving so much as a scrape.

1. The Devious Book for Cats: A Parody

2. The Devious Book for Cats: A Parody

3. The Devious Book for Cats: A Parody

4. The Devious Book for Cats: A Parody

5. The Devious Book for Cats: A Parody

6. The Devious Book for Cats: A Parody

7. THE DEVIOUS BOOK FOR CATS: A PAR