Items related to If You Know Her (Ash Trilogy, Book 3)

Walker, Shiloh If You Know Her (Ash Trilogy, Book 3)

If You Know Her (Ash Trilogy, Book 3) 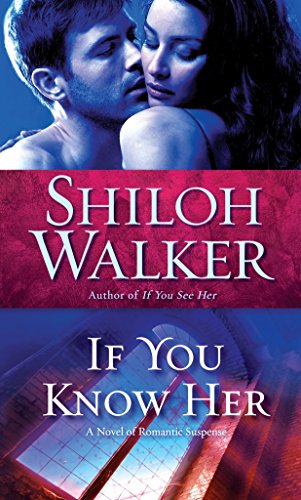 A SHADOW IN THE WINDOW

Nia Hollister doesn’t scare easily. She’s returned to Ash, Kentucky, with a vengeance—and with a mission: find the killer who brutally ended her cousin’s life. What she didn’t count on was trembling with desire every time she sees Law Reilly. If any man can help her escape the nightmares for a while, it’s him. But can she allow herself to take comfort in those strong arms when her sister’s killer still roams free?

She may think she’s a bad ass, but she should not have come back to his town. He is watching her—as she slips into Law Reilly’s house, as she storms into the sheriff’s office. These men won’t be able to protect her when her time comes. Timing is everything, though he can’t wait forever. She’s nosing around the woods, looking for his hiding place. Yes, he is watching her . . . through the window . . . in her bed . . .

If she’s not scared, she should be . . . because he is very good at what he does.

"You okay with soup?"

He laughed. "Nah, you're safe. I can't touch split pea without thinking of The Exorcist."

Nia groaned and squeezed her eyes closed. "Oh, that so much for that image..."

"You're welcome," he said cheerfully. "I always feel better when I share an image like that. Helps lessen my mental agony."

Popping one eye open, she stared at him as he opened the red and white can. "Your mental agony. You're a strange character, Law."

She shuddered and tried to scrub her mind of that image--thankfully it had been years since she'd tried split pea soup so she wasn't inclined to gag, and she had a pretty strong stomach anyway. The shit she saw in her job...well, it wasn't for the faint of heart.

"Since we're not going to define just what we're doing here, I've got another question for you."

"Yeah?" She was almost afraid to hear, seeing as how his humor obviously ran to the twisted.

But when she glanced at him, his expression was serious.

He took his time, putting the soup on the stove, flipping the bacon again. Her belly rumbled at the scent and she thought about getting up to try and steal a piece.

Then he pinned her with that intense hazel gaze. How those eyes could look so dark and brooding, she didn't know, but he managed it. Her knees felt a little wobbly and all of a sudden, her heart was racing.

"Just why are you back in Ash, Nia?" he asked softly.

"Pardon?" Even as she forced the word out, she wanted to kick herself. Playing dumb wasn't going to work with him. But she didn't know how to answer that question.

Tell him the truth, a small voice inside her heart whispered.

Her head screeched, No.

Everything else demanded she do just that.

The truth--give him the truth.

But what if he laughed? What if he didn't believe her?

What if--God forbid--he pitied her and stroked her back and sent her on her way?

Swallowing, she swiped her hands on the overlong hem of the shirt again, staring past his shoulder at the window. The blinds were down, but the window was open and occasionally, the blinds would move, pushed in by a small breeze. She focused on the small undulation, tried to get her thoughts in order.

Where to start...hell, where did she start?

Did she tell him the truth?

She swallowed, jerked her eyes back to his.

Yeah. She told him the truth. Somehow, she knew he wasn't going to laugh. Wouldn't pat her on the head and send her on her way. Whether he'd believe her or not, she didn't know, but he wouldn't dismiss it, either.

Law nodded. "I had a feeling it was about her. No other reason for you to come back here, is there?"

She swallowed again--there was a knot in her throat--huge and awful, and she could hardly breathe around it. But swallowing almost made her feel like she'd choke--choke on the tears, the pain. "You'd think it would get easier, right? "

Shiloh Walker is the bestselling author of If You Hear Her, Chains, Fragile, and The Missing. She loves reading and writing anything fantasy and nearly every kind of romance. Once upon a time she worked as a nurse, but now she writes full-time and lives with her family in the Midwest.