Items related to Underground London: Travels Beneath the City Streets 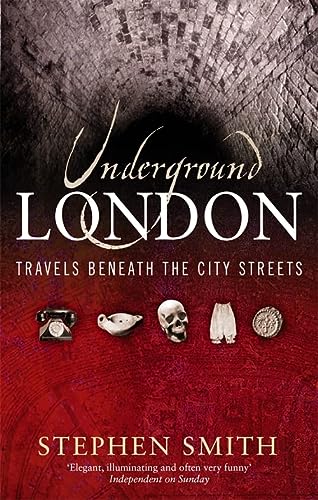 What is visible to the naked eye has been exhaustively raked over; in UNDERGROUND LONDON, acclaimed travel writer Stephen Smith provides an alternative guide and history of the capital. It's a journey through the passages and tunnels of the city, the bunkers and tunnels, crypts and shadows. As well as being a contemporary tour of underground London, it's also an exploration through time: Queen Boudicca lies beneath Platform 10 at King's Cross (legend has it); Dick Turpin fled the Bow Street Runners along secret passages leading from the cellar of the Spaniards pub in North London; the remains of a pre-Christian Mithraic temple have been found near the Bank of England; on the platforms of the now defunct King William Street Underground, posters still warn that 'Careless talk costs lives'.
Stephen Smith uncovers the secrets of the city by walking through sewers, tunnels under such places as Hampton Court, ghost tube stations, and long lost rivers such as the Fleet and the Tyburn. This is 'alternative' history at its best.

(Smith) offers an enjoyable guide to the subterranean parts of a great city...his sense of the enveloping mysterious is spot-on.―OBSERVER

Brilliant... so much more than just another city ramble.―MAIL ON SUNDAY

A notable portrait of London... By becoming a proper witness to the unseen, covert and little-known, [Smith] rescues reportage and makes of it a kind of poetry―Iain Sinclair, EVENING STANDARD