Items related to The Steep Approach to Garbadale

The Steep Approach to Garbadale 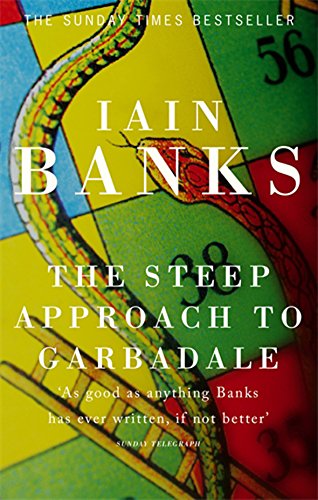 Dark family secrets and a long-lost love affair lie at the heart of a fabulous new novel by the author of Matter and The Wasp Factory The Wopuld family built its fortune on a board game called Empire!, now a hugely successful computer game. So successful, in fact, that the American Spraint Corp wants to buy the firm out. Young renegade Alban, who has evaded the family clutches for years, is persuded to attend the forthcoming family gathering—part birthday party, part Extraordinary General Meeting—convened by Win, Wopuld matriarch and most powerful member of the board, at Garbadale, the family's highland castle. Being drawn back into the bosom of the clan brings a disconcerting confrontation with Alban's past. What drove his mother to take her own life? And is he ready to see Sophie, his beautiful cousin and teenage love? Grandmother Win's revelations will radically alter Alban's perspective forever.

Iain Banks has gained enormous popular and critical acclaim for both his mainstream and his science fiction novels. He is perhaps best known for his Culture series of novels, which includes Consider Phlebas, Matter, and Surface Detail.

The latest offering from Banks (The Wasp Factory) gives a scion's-eye view of an eccentric, splintering Scottish business family. Having secured immense wealth via the Empire! board game (invented by a relative in 1880) and its various offshoots, the Wopuld family must now decide whether to sell the company: the American Spraint Corporation wants Empire! as a jewel in its crown. As the family gathers to celebrate matriarch Grandma Win's 80th birthday and have a board meeting, Win dispatches grandson Fielding to find his cousin Alban, who has fled the family to become a forester, in order to solidify her vision of the family legacy. Banks flashes back through Alban's painful memories of his mother (who committed suicide) and his cousin Sophie (whom he loved) as he heads home. The book contains a plethora of family secrets, none of which fully drive the plot, but the gothic setting, big passions and light humor suffice. Bank's 23rd book isn't his best, but it carries one all the way up its craggy steeps. (Oct.)
Copyright © Reed Business Information, a division of Reed Elsevier Inc. All rights reserved.

1. The Steep Approach to Garbadale

2. The Steep Approach to Garbadale

3. The Steep Approach to Garbadale