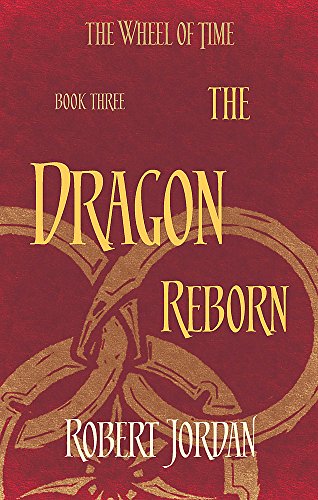 From the Back Cover:
The Wheel of Time turns, and Ages come and pass. What was, what will be, and what is, may yet fall under the Shadow.
Rand Al'Thor is the Dragon Reborn-- able to touch the One Power, but unable to control it. Rand knows only that he must face the Dark One in a battle to the death. Ahead of him lies the next great test for...
"The Dragon Reborn"
"Large and splendid. The saga reaches a new level of emotional impact."--"Chicago Sun-Times"
"Jordan writes with the stark vision of light and darkness, and sometimes childlike sense of wonder, that permeates J.R.R. Tolkien's works. His style is undeniably his own."--"The Pittsburgh Press"
THE WHEEL OF TIME (TM)
Book One: "The Eye of the World"
Book Two: "The Great Hunt"
Book Three: "The Dragon Reborn"
Book Four: "The Shadow Rising"
Book Five: "The Fires of Heaven"
Book Six: "Lord of Chaos"
Book Seven: "A Crown of Swords"
Book Eight: "The Path of Daggers"
Book Nine: "Winter's Heart"
Book Ten: "Crossroads of Twilight"
About the Author:
Robert Jordan was born in 1948 in Charleston. He was a graduate of the Citadel, the Military College of South Carolina, with a degree in physics, and served two tours in Vietnam. His hobbies included hunting, fishing, sailing, poker, chess, pool and pipe collecting. He died in September 2007.