Items related to Crossroads Of Twilight: Book 10 of the Wheel of Time...

Jordan, Robert Crossroads Of Twilight: Book 10 of the Wheel of Time (soon to be a major TV series)

Crossroads Of Twilight: Book 10 of the Wheel of Time (soon to be a major TV series) 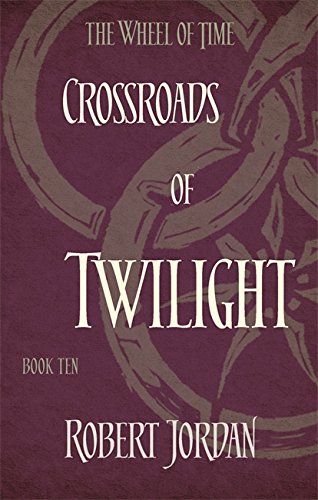 'Epic in every sense' - Sunday Times

The tenth novel in the Wheel of Time series - one of the most influential and popular fantasy epics ever published.

Fleeing from Ebou Dar with the kidnapped Daughter of the Nine Moons, Mat Cauthon learns that he can neither keep her nor let her go, for both the Shadow and the might of the Seanchan empire are now in deadly pursuit.

At Tar Valon, Egwene al'Vere lays siege to the White Tower. She must win quickly, with as little bloodshed as possible, for unless the Aes Sedai are reunited only the male Asha'man will remain to defend the world against the Dark One.

Meanwhile, Rand al'Thor must gamble again, with himself at stake - not knowing which of his allies are really enemies.

'With the Wheel of Time, Jordan has come to dominate the world that Tolkien began to reveal' New York Times

Review:
With Crossroads of Twilight, Jordan's gargantuan fantasy sequence The Wheel of Time reaches its tenth huge volume and hits some of the consequences of its own sheer scale. Jordan is running so many story lines--the struggle with the covert agents of evil, the creation of a male magic that is not polluted, the war with magic-using dragon-riders from across the sea, the adventures of a travelling circus--that he has to spend almost all of this book just keeping us in touch with the movements of his characters and how they are getting on.

This is a book with a fair amount of incident, but nothing you could really call a climax. One of Jordan's strengths has always been his ability to send things off at interesting and imaginative tangents, revealing that his is a stranger world than we have begun to know--there is not enough of that here, and rather too much in the way of confrontations and kidnappings and dilemmas of conscience that recapitulate things he has done before. His decent, lumbering "grey" style means that there are no moments when the writing thrills us either--this is a book for those who have committed to Jordan's sequence for the long haul rather than one for new readers to sample. --Roz Kaveney

With the Wheel of Time, Jordan has come to dominate the world that Tolkien began to reveal (New York Times)

Crossroads Of Twilight: Book 10 of the Wheel of Time (soon to be a major TV series)

Book Description Paperback. Condition: Very Good. The book has been read, but is in excellent condition. Pages are intact and not marred by notes or highlighting. The spine remains undamaged. Seller Inventory # GOR007037361