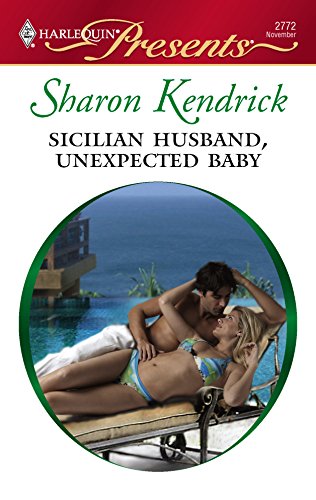 When Emma's billionaire Sicilian husband found out she was infertile, their marriage was over. Then, back in England, Emma discovered the impossible had happened—she was pregnant! But life is hard, and, unable to pay her bills, she has only one option: Vincenzo.

Now that he knows he's a father, Vincenzo will claim his son and if Emma is to stay with her beloved child, she must return to the marriage bed!

Sharon Kendrick started story-telling at the age of eleven and has never stopped. She likes to write fast-paced, feel-good romances with heroes who are so sexy they’ll make your toes curl! She lives in the beautiful city of Winchester – where she can see the cathedral from her window (when standing on tip-toe!). She has two children, Celia and Patrick and her passions include music, books, cooking and eating – and drifting into daydreams while working out new plots.

Emma felt the frisson of very real fear sliding over her skin. She looked at the lanky blond man standing in front of her and composed her face carefully—because the last thing she could afford to do was panic.

'But I can't afford any more rent, Andrew,' she said quietly. 'You know that.'

The man shrugged apologetically but his expression didn't change. 'And I'm not running a charity. I'm sorry, Emma—but I could get four times the amount I'm charging you if I put it back on the market.'

Like a robot, Emma nodded. Of course he could. Pretty little cottages in pretty little English towns were snapped up like hot cakes. Everyone, it seemed, was into rural living these days.

The man hesitated. 'Isn't there anyone you could ask? Anyone who could help? What about your husband?'

Quickly, Emma stood up, fixing a crumpled attempt at a smile to her lips and wondering if it fooled anyone. Just the very mention of the man she had married had the power to make her feel weak, but weakness had no place in her life, not any more. She simply couldn't afford to let it. 'It's very kind of you to be concerned, but it's my problem,' she said.

'Please, Andrew,' she said, trying to keep her voice calm—because she never spoke of Vincenzo, not to anyone. 'Either I come up with the increased rent or I move somewhere cheaper—those are the only two solutions open to me.'

She knew there was also an unacknowledged third— Andrew had made that very clear in that sweet and polite English way of his. But she wasn't going to start dating him just to keep her rent at a below-market-rate level, and, anyway, she didn't want a boyfriend. She didn't want anyone in her life—she had no room, no time or inclination for a man. And desire had died in her the day she had left Vincenzo.

Andrew said goodbye, disappearing into the dank November air just as a whimper came from the small bedroom and Emma crept in to stare at her sleeping son.

Already ten months old—how was that possible? He was growing in leaps and bounds with every day that passed—developing his own sturdy little frame to go along with his very definite personality.

He had kicked his duvet away and was clutching his little woollen rabbit as if his life depended on it and Emma's heart turned over with love and worry. If there had been just her to think about, then there wouldn't have been a problem. There were plenty of jobs available which came with a room and she would gladly have taken any one of them.

But it wasn't just her. There was her son to think about—and she owed him the very best that the world could provide. It wasn't his fault that his birth had placed her in an impossible situation.

Emma bit her lip. She knew what Andrew had suggested made sense, but it wasn't as easy as that—and Andrew didn't know the details. Nobody did. Could she really swallow her pride and her beliefs and go to her estranged husband, asking him for financial assistance?

Was she perhaps due some, by law? Vincenzo was a fabulously wealthy man and—even though he now despised her and had told her he never wanted to see her again—wouldn't he play fair by providing her with some kind of modest settlement if she asked him for a divorce?

Tiredly, she rubbed at her eyes. What other solution did she have? She wasn't qualified for anything high-earning and the last time she'd gone out to work had ended up paying most of her meagre wages to the child-minder. And little Gino had hated it.

So she'd taken up child-minding herself. It had seemed the perfect compromise—she loved children and it was a way of earning money to pay the bills without having to farm out her beloved son to anyone else while she did so. But lately even that avenue of employment had caved in.

Several of the mothers had complained that her cottage was too cold for their children and demanded that she increase the temperature significantly. Two even removed their children straight away and her suspicions that there was going to be a domino effect and that the rest would follow suit were soon proved true. Now there were no more children to look after and no money coming in.

How on earth was she going to feed herself and Gino? Put a roof over their heads if Andrew increased the rent? Emma wanted to cry but she knew that she could not afford the luxury of tears—and tears would solve precisely nothing. There was nobody to dry them except for her and tears were for babies—except that she was determined her little boy was going to cry as little as possible. She had to be the grown-up now.

Opening the drawer of the small telephone table, she extracted the well-worn business card—her hand beginning to shake as she stared down at the name which leapt out at her like a dark crow from the sky.

Beneath it were the contact details of his offices in Rome, New York and Palermo—which she could never afford to ring in a month of Sundays—but also the number of his London offices, which she assumed he still operated out of regularly.

And yet it hurt to think that he might still own a luxurious tower block in the capital. To realise that he might have spent long and regular amounts of time in the same country as her and not once—not once—bothered to come and look her up, not even for old times' sake.

Well, of course he wouldn't, she scolded herself. He doesn't love you any more, he doesn't even like you— he made that quite plain. Remember his last words for you—delivered in that deadly cold, Sicilian drawl of his.

'Get out of here, Emma and do not come back—for you are no wife of mine.'

But hadn't she tried to ring him before, not once, but twice—and both times hadn't he humiliatingly refused to speak to her? What was to say that this time would be any different?

Yet she knew she owed it to her son to keep trying. She owed him the right to know something of the basic comfort which should be every child's entitlement and which his father's money could guarantee. Wasn't that more important than anything else? She needed to do this for Gino's sake.

Emma shivered, pulling her sweater closer to her slim frame. These days her clothes seemed to swallow her up. She generally wore layers and kept on the move in this chilly autumn weather to keep herself warm. But soon her son would be awake and then she would have to put the heating on and more of her precious pennies would be eaten up by the ever-hungry gas fire.

There was, she realised heavily, no choice other than to ring Vincenzo. Running her tongue around her suddenly parched lips, she lifted up the phone and punched out the number with a shaky finger, her accelerated heart rate making her feel dizzy with expectation.

'Hello?' The voice of the woman who answered was smooth and with only a trace of an accent, probably bilingual.

But Vincenzo only employed people who could speak Italian, as well as English, Emma remembered. He even preferred it if his employees also spoke the very particular Sicilian dialect—which was a mystery to so many. Because Sicilians looked out for one another, he had once told her. They were members of a unique club of which they were fiercely proud. In fact, the more Emma thought about it, the more surprising she found it that he had ever chosen to marry her at all—she who spoke nothing more than a smattering of anything other than her native tongue.

He married you because he felt obliged to, she reminded herself. And didn't he tell you that enough times? Just as the marriage broke down because you were unable to keep your part of the bargain.

'Would it be...?' Emma cleared her throat. 'Er, could you tell me how I could get hold of Signor Cardini, please?'

There was a short silence—as if the telephonist was shocked that a faltering unknown should dare to ask to be put through to the great man himself.

'May I ask who is calling?'

There was another pause. 'And your call is in connection with...?'

So there was no recognition of her name and no knowledge of her status. No respect, either—and something deep inside Emma bristled with hurt and rejection.

The woman had clearly been wrong-footed and Emma could almost hear her thinking—What the hell do I tell her?

Emma was forced to wait for what seemed like an eternity, while pinpricks of sweat beaded her forehead despite the chilly atmosphere in the cottage. She was just silently practising saying Hello, Vincenzo over and over in her head to make it sound as emotionless as possible, when the telephonist's voice broke into her thoughts.

'Signor Cardini says to tell you that he is in a meeting and cannot be disturbed.'

The humiliation hit her like a blow to the solar plexus and Emma found herself gripping on to the receiver as if she wanted to crush it in her clammy palm. She was just about to drop it back down onto the cradle when she realised the woman was still speaking to her.

'But he says if you would care to leave a number where you can be contacted, he will endeavour to ring you when he has a moment.'

Pride made Emma want to pass on the message that he could go to hell if he couldn't even be bothered to speak to the woman he had married.

But she could not afford the luxury of pride. 'Yes, here's my number,' she said quietly. 'Do you have a pen?'

'Of course,' said the woman in an amused voice.

After she had put the phone down, Emma went to make a cup of tea, cupping the steaming mug around her cold fingers as she looked out of the kitchen window at the little garden she had grown to love.

Shiny brown conkers from a large tree on Andrew's huge adjoining estate had fallen over the flint wall and all over her tiny lawn and path. She had planned to put one of those mini sandpits in an unused corner of the plot and to grow a fragrant white jasmine to scent the long sum...