Items related to Girl Behind the Scandalous Reputation

Girl Behind the Scandalous Reputation 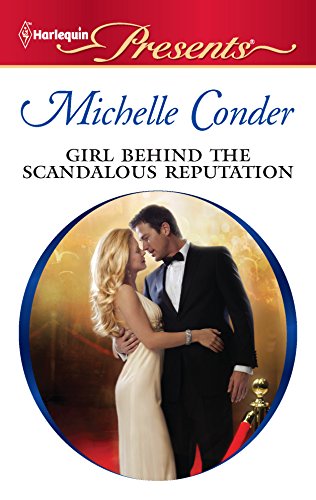 Getting falsely arrested feels like a scene from a bad movie for rising star Lily Wild, especially when she discovers the conditions of her release—around-the-clock surveillance by world-class lawyer Tristan Garrett. Ignoring her attraction to the sinfully sexy man who crushed her youthful heart is getting harder by the minute!

Lily's reputation is in Tristan's hands now and when he says jump, she'd better ask how high! With a reputation founded on control, he's determined not to lose his head over this little minx again. But he blazes white-hot every time he looks at her and it's burning away his couldn't-care-less facade!

From as far back as she can remember Michelle Conder dreamed of being a writer. She penned the first chapter of a romance novel just out of high school, but it took much study, many (varied) jobs, one ultra-understanding husband and three gorgeous children before she finally sat down to turn that dream into a reality.

Michelle lives in Australia, and when she isn’t busy plotting she loves to read, ride horses, travel and practise yoga. Visit Michelle: www.michelleconder.com

'Is this your idea of a joke, Jordana?' Tristan Garrett turned away from the view of the Thames outside his tenth-storey office window to stare incredulously at his baby sister. She sat in one of the navy tub chairs on the visitors' side of his desk, legs crossed, immaculately groomed, and looking not at all like a crazy person sailing three sheets to the wind—as she sounded.

'As if I would joke about something so serious!' Jordana exclaimed, gazing at him, her jade-green eyes, the exact shade of his own, wide and etched with worry. 'I know it sounds unbelievable but it's true, and we have to help her.'

Actually, her story didn't sound unbelievable at all, but Tristan knew his sanguine sister had a tendency to see goodness in people when there was none to see at all.

He turned back to stare at the pedestrians lining the Thames and better able to enjoy the september sunshine than he was. He couldn't stand seeing his sister so upset, and he cursed the so-called friend who was responsible for putting these fresh tears in her eyes.

When she came to stand beside him he slung his arm around her shoulders, drawing her close. What could he say to placate her? That the friend she wanted to help wasn't worth it? That anyone stupid enough to try and smuggle drugs out of Thailand deserved to get caught?

Normally he would help his sister in a heartbeat, but no way was he getting involved in this fiasco—and nor was she. He gave her an affectionate squeeze, but he didn't try to contain the edge of steel in his voice when he spoke. 'Jo, this is not your problem and you are not getting involved.'

Tristan held up his hand to cut off her immediate objection, his solid-gold cufflinks glinting in the downlights. 'If what you say is true then the girl made her bed and she'll have to lie in it. And may I remind you that you're eight days away from the wedding of the year. Not only will Oliver not want you getting involved, but I doubt the Prince of Greece will want to sit beside a known drug-user—no matter how beautiful.'

Jordana's mouth tightened. 'Oliver will want me to do what's right,' she objected. 'And I don't care what my wedding guests think. I'm going to help Lily and that's that.'

Tristan shook his head. 'Why would you risk it?'

'she's my best friend and I promised I would.'

That surprised him. He'd thought their friendship had died down years ago. But if that was the case then why was Lily to be maid of honour at Jo's wedding? Maid of honour to his best man! And why hadn't he thought to ask that question two weeks earlier, when he'd found out Lily was coming to the wedding?

He frowned, but decided to push that issue aside for the more pressing problem at hand. 'When did you speak to her?'

'I didn't. A customs officer called on her behalf. Lily wanted to let me know why she couldn't meet me, and—Oh, Tristan, if we don't help her she'll probably go to jail.'

Tristan pushed back the thick lock of hair that had fallen over his forehead and made a mental note to book a haircut.

Much as he didn't want to, he could see that he needed to get tough with his sister. 'Which is probably the best place for her.' He scowled. 'She'll be able to get help there.'

Didn't he? He didn't know. But what he did know was that his morning had been a lot better before Jordana had rushed into his office, bringing to mind a girl he'd rather strip from it altogether.

Currently voted one of the sexiest women on the planet, and a talented actress to boot. He didn't follow films but he'd seen her first one—some art-house twaddle made by a precocious upstart of a director about the end of the world. Tristan couldn't remember the plot. What man could? It had Lily naked, save for a white oversized singlet and a pair of cotton panties masquerading as shorts, in almost every scene. The movie had signified to him that as a culture they were heading backwards—and people like Lily Wild were half the reason for that.

He and his father had tolerated the girls' teenage friendship because it had made Jordana happy—and neither man would ever have jeopardised that—but Tristan had disliked Lily on sight when he'd first come across her as a gangly fourteen-year-old, hiding drugs under his sister's dormitory mattress. She'd been haughty beyond her years that day, and if he had his time again he'd suggest his sister be relocated to another boarding school quick-smart.

Tristan heaved a sigh and returned to the smooth curve of his walnut desk, stroking his computer mouse to get rid of the screen saver. 'Jo, I'm busy. I have an important meeting in half an hour. I'm sorry, but I can't help.'

'Tristan, I know you have a thing about drug-users, but Lily is innocent.'

'And you know this how, exactly?' he queried, deciding that humouring his sister might expedite her leaving.

'Because I know Lily, and I know she doesn't take drugs. she hates them.'

Tristan raised an eyebrow. Was his sister for real?

'Have you conveniently forgotten the fallout from your eighteenth birthday party? How I caught her hiding a joint when she was fourteen? Not to mention the various press photos of her completely wasted in between.'

Jordana frowned and shook her head. 'Most of those photos were fakes. Lily's been hounded by the press her whole life because of who her parents were—and, anyway, she's far too sensible and level-headed to get involved in something as destructive as drugs.'

'And that would be why there was the scandal at your eighteenth? Because Lily is so level-headed?'

Jordana glanced at the ceiling before returning resigned eyes to his. 'Tristan, that night was so not what it seemed. One dodgy photo—'

'You mean if you hadn't made Lily take the blame!'

'Lily was to blame!' Tristan could feel the old anger of six years ago welling up inside him. But it wasn't like him to let his temper override common sense and he controlled it with effort. 'Maybe if I had contacted her stepfather when I caught her with marijuana the first time she wouldn't be in the colossal mess she is now.'

Jordana briefly lowered her eyes before meeting his again. 'Tristan, you've never let me properly explain about any of this. What if the marijuana you found Lily hiding when we were fourteen wasn't hers? Would you be so disappointed if it was mine?'

Tristan expelled a breath. He really didn't have time for this. He got up and rounded his desk to enfold Jordana in his arms. He knew what she was trying to do and he loved her for it—even if the little bimbo she was trying to protect didn't deserve her loyalty.

'I know you're trying to take the blame for her, Jo. You've always protected her. But the fact still remains that she's trouble. She always has been. Surely her stepfather or stepsisters can help her?'

Jordana sniffed against his chest and pushed away a little. 'They've never been very close, and anyway I think they're holidaying in France. Please, Tristan! The officer I spoke to this morning said she might be deported back to Thailand. And, no matter what you think, I can't let that happen.'

Tristan swore under his breath. He had to admit he didn't want to imagine the gorgeous Lily Wild wasting away in a Thai prison cell either. 'Jo, my specialty is corporate law, and this will fall under the criminal jurisdiction.'

'But surely you can do something!' she implored.

Tristan released his sister and stalked over to the floor-to-ceiling windows again.

Unwelcome images of Lily as he'd last seen her crowded in and he forcibly held them back. She had been intruding on his thoughts and dreams for years now, but more so of late. Ever since Jordana had mentioned she was coming to the wedding, in fact, and to say that he resented her for it was putting it mildly.

He closed his eyes, the better to control the physical reaction he always seemed to have when he pictured her, but that only made it worse. Now he could not only visualise her, he could almost scent her as well.

Jordana touched his arm, and for a split second he imagined it was Lily.

Tristan muttered another curse under his breath. 'Jo, forget Lily Wild and concentrate on your wedding,' he growled, feeling like a heel when his sister flinched back from him.

'If Lily's not going to be there I might not even have a wedding.'

'Now you're being melodramatic.'

'And you're being horrible. Lily's been unfairly targeted...' 'Jordana, the woman wasn't targeted. She was caught red-handed!'

Jordana looked at him with the kind of pain he hadn't seen in her eyes since the day they had buried their mother. He'd vowed then that he'd do anything to protect her in the future and safeguard her happiness, and wasn't what he was doing now the opposite?

But what she was asking was impossible...

'Tristan, I know you hate drugs because of Mum, but Lily isn't like that. And you usually jump at the chance to help a worthy cause.'

Tristan stared at Jordana. Her words brought back memories of the past he'd much rather leave dead and buried. And maybe it was somewhat illogical but he blamed Lily for that as well—because without her latest antics he wouldn't be having this conversation with his sister at all!

He turned back to face Jo and unclenched his jaw. 'Jordana, the key word in this situation is worthy. And as far as I'm concerned a drug-addi...

1. Girl Behind the Scandalous Reputation

2. Girl Behind the Scandalous Reputation

3. Girl Behind the Scandalous Reputation

5. GIRL BEHIND THE SCANDALOUS REPUT