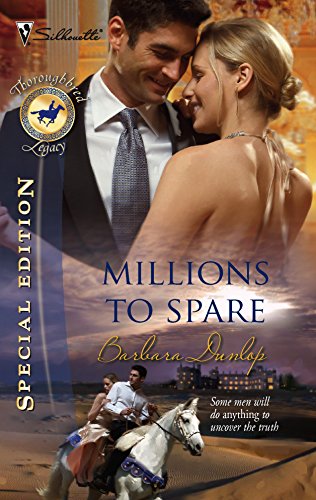 Reporter Julia Nash has waited years to join the top ranks of investigative journalists. When a trip to Dubai reveals the key to a mystery in the world of Thoroughbred racing, Julia finds her chance. But then she's caught snooping...and held in the sole custody of Lord Harrison Rochester!

As long as it takes. That's what Harrison vows when he keeps Julia at his desert estate. He'll discover what the beauty has been up to—even if the search leads to an attraction neither expected. But when Julia's safety is compromised, they must say goodbye...or "I do."

Julia Nash might hang out with the superrich, but she definitely wasn't one of them. She was only in Dubai because her employer, Equine Earth Magazine, had sent her there on assignment. And she was only staying at the Jumeirah Beach Hotel because her friend Melanie Preston, a jockey and the subject of the article, had insisted they share her room. Otherwise, Julia would have been down at the Crystal Sands, living within her reporter's travel allowance.

Like regular people, Julia had a condo payment, a crack in the windshield of her four-year-old Honda, and her eye on a limited edition watercolor at the Beau-champ Gallery back in Lexington. So, when Melanie had invited her shopping this afternoon, Julia decided not to subject herself to temptation. She'd claimed she was duty bound to scope out the Nad Al Sheba racecourse, and the excuse was mostly true. She needed to get a feel for the sights and sounds of the exotic Thoroughbred racecourse.

The Prestons owned Quest Stables outside Louisville, Kentucky, and their horse Something to Talk About would race in the Sandstone Derby on Thursday evening. Any background information Julia could pick up between now and then would make her story that much richer.

It was a fluff piece, something to combat the negative press the Prestons had received lately in connection with their Thoroughbred Leopold's Legacy. DNA tests had revealed that the stallion was not sired by Apollo's Ice, as recorded, and therefore could no longer compete in Thoroughbred races until the true sire was found. But she took the job seriously. Not only were the Prestons her friends and in need of positive publicity, Julia knew her way out of the lifestyle section of Equine Earth was to do each and every story to the best of her ability.

Although today's Thoroughbred races wouldn't start for a couple of hours, the Arabian and expatriate crowd was beginning to gather. Men in white robes contrasted with women in high fashion. Grooms walked sleek horses, while jockeys chatted amongst themselves, some suited up, some still in street clothes.

In the three years she'd been working for Equine Earth, Julia had developed an appreciation for Thoroughbreds and their breeding. She even imagined she was developing an eye for which horse had potential and which one did not. She'd never be as good at it as Melanie, who'd grown up at her family's famous racing stables. And she couldn't touch Melanie's brother Robbie, Something to Talk About's trainer.

But, for now, she slowed to watch two horses pass by on the dirt track on the opposite side of the fence from her, judging for herself the Thoroughbred's potential. It was easy to tell which was the helper and which was the racer. One was a stocky, barrel-bellied chestnut with a scraggly black mane, who looked positively bombproof. The other was a twitchy, long-legged dun, straining at the halter, its tail flicking nervously over its haunches.

Julia inched toward the fence, straining for a closer look at the tail. The Thoroughbred was a dun. It had a clover-shaped star and the familiar, dark-brown eyes. It also had that unique flaxen tail that Julia had stared at in dozens of pictures at the Prestons.

The Prestons'veterinarian, Carter Phillips, had found a stallion in California two months ago that he swore was a twin to Leopold's Legacy. Julia realized she had now found a triplet.

She paced alongside the animal, trying to keep up without looking conspicuous. She scanned its head, its shoulders, its withers and legs, desperately searching her brain for something definitive, something that would tell her whether this was an animal worth investigating. She wished her eye was as keen as Melanie's or Robbie's.

Then, she remembered her cell phone. Perfect. She'd e-mail a picture to Melanie and take it from there.

All but trotting along under the warmth of a waning desert sun, she dug into her small purse, tugging out her cell phone. Then she ran a couple of steps to get the angle right, and held up the phone.

Instantly, a white, brass-buttoned, uniformed chest stepped between her and the fence, blocking her view.

"I am very sorry, madam," the man said, not looking sorry at all.

Julia had no choice but to stop. She tipped her head to blink into a dark, bearded face, shaded by a peaked cap.

"No pictures," he informed her, his lips clamped in a stern line.

"I don't understand," she lied, glancing around, cursing the fact that the horse was getting away.

The No Photos signs were posted conspicuously around the racetrack in at least six languages—three of which Julia spoke.

"No pictures," the man repeated. "And this is not a public area."

She maintained her facade of confusion, still keeping an eye on the retreating dun. "But—"

"I must ask you to return to the stands." The man gestured back the way she'd come.

She peeked around him one last time, scrambling for a solution before the horse and groom disappeared. "Do you know who owns that horse?" she asked.

"This is not a public area," the man repeated.

Suddenly, a rugged-looking man in a white head scarf and a flowing, white robe materialized beside them. "Do we have a problem?"

Julia instinctively took a step back, shaking her head in denial that she was causing any kind of a problem. This did not look like the kind of man she wanted to annoy. His beard was scraggly, the tip of his nose was missing, and one eyebrow was markedly shorter than the other. Truly, she had no desire to run afoul of somebody who looked like a bar-fight veteran.

"I was only..." She took another step back, taking note of the primal urge that told her to put some distance between the two of them. "Curious about a horse."

His eyes narrowed. "Which horse?"

"The dun. I..." She hesitated, then screwed up her courage. If she walked away now, she might never find out about the horse, and she might lose a real opportunity to help the Prestons.

She gave her eyelashes a determined flutter and offered a bright, ingenuous grin. "It's pretty. When's it racing?"

His thin lips curved into a cold smile. "You wish to bet?"

"No. No, of course I don't want to bet." Betting was illegal in Dubai.

"He is Millions to Spare. The third race."

A name. She had a name. Julia mentally congratulated herself.

She turned to leave, but the man's hand closed around her upper arm. She glanced down, spotting a tiny tattoo on his inner wrist. It was square, red and gold, with a diagonal line cut through the center.

"You talk to Al Amine," the man said.

She struggled not to panic.

But then he released her. "For a bet. You talk to Al Amine."

She reflexively glanced at the uniformed man. Either his English was weak, or they didn't take the no-betting law particularly seriously around here.

In either event, Julia had the Thoroughbred's name. A little more sleuthing, and she'd have the name of the stable. If luck was with her, she could end up with more than a fluff piece from this trip. Imagine if she was able to solve the mystery, identify Leopold's Legacy's true sire? The Prestons would be in the clear, and her name would be on a byline.

Since earning her journalism degree at Cal State, she'd dreamed of breaking significant news stories, of bringing insights and information to millions of readers around the world. So far, she'd only managed to bring insights on horse racing to a limited audience through Equine Earth.

Not that Equine Earth was a bad employer; they had brought a lower middle-class Seattle girl all the way to Dubai. And soon she'd have enough experience and credentials to branch out to harder news, maybe with a mainstream publication.

As the crowds closed in behind her, she took one last glance at the mystery stallion.

"Come on, Leopold's Legacy connection," she muttered under her breath. For the first time in her career, a racehorse story had the potential to move beyond the business and into the mainstream.

Through the speakers above her, the announcer switched from English to Arabic to Spanish, reciting some of the more prominent horses'names and the time left to the first parade to the post.

Julia ignored the growing excitement in the audience. Her goal was information on Millions to Spare. If she could find a program, she could look up the name of his stable and potentially be on her way to a significant story.

The lettering on the side of the eight-horse trailer was in both English and Arabic. There was a phone number beneath, but a telephone call was the last thing on Julia's mind. Millions to Spare was in that trailer. And Julia was in the middle of an honest-to-God covert operation here.

She'd figured out the one thing, the one little thing that would tell her for certain if Millions to Spare was a lead in the Leopold's Legacy parentage mystery, or just another dead end. And that little thing was his DNA.

She'd watched men load the stallion into the eight-horse trailer just a few minutes ago. Now, the last groom was walking away, leaving it unattended, and providing Julia with her golden chance.

Carter Phillips had run into nothing but resistance when he'd checked out the DNA of the other Leopold's Legacy look-alike in California. His experience had taught Julia it was better to ask for forgiveness than permission. Considering her DNA test might result in Millions to Spare being disqualified from the Thoroughbred registry, she wasn't about to call Cadair in advance. She was going to gather the facts first, then deal with the implications—if there were any—later.

All she needed was a tiny sample. Millions to Spare wouldn't even miss it. Then Carter Phillips could run the test, and she'd know if she had a live investigation on her hands, or if she was switching back to the straight fluff piece about the Prestons' two-year-old Something to Talk About racing in Dubai.

She took a final glance around the parking lot. Seeing no one who appeared interested in the Cadair Racing trailer, she scooted out in high-heeled sandals, a sleeveles...