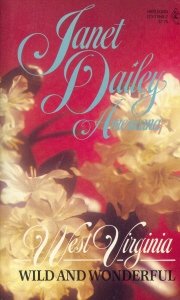 Every novel in this collection is your passport to a romantic tour of the United States through time-honored favorites by America's First Lady of romance fiction. Each of the fifty novels is set in a different state, researched by Janet and her husband, Bill. For the Daileys it was an odyssey of discovery. For you, it's the journey of a lifetime. Your tour of desire begins with this story set in West Virginia.

Janet Dailey, who passed away in 2013, was born Janet Haradon in 1944 in Storm Lake, Iowa. She attended secretarial school in Omaha, Nebraska, before meeting her husband, Bill. The two worked together in construction and land development until they “retired” to travel throughout the United States, inspiring Janet to write the Americana series of romances, setting a novel in every state of the Union. In 1974, Janet Dailey was the first American author to write for Harlequin. Her first novel was No Quarter Asked. She has gone on to write approximately ninety novels, twenty-one of which have appeared on the New York Times bestseller list. She won many awards and accolades for her work, appearing widely on radio and television. Today, there are over three hundred million Janet Dailey books in print in nineteen different languages, making her one of the most popular novelists in the world. For more information about Janet Dailey, visit www.janetdailey.com.