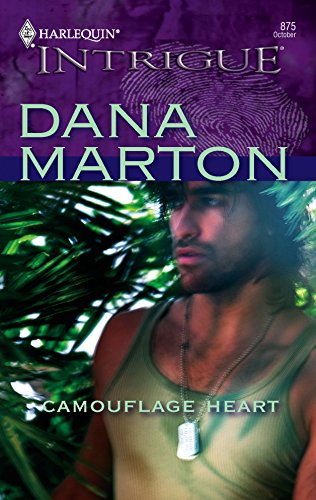 Camouflage Heart by Dana Marton released on Oct 11, 2005 is available now for purchase.

Author Dana Marton has written over fifteen novels for Harlequin Intrigue, stories that feature breathtaking suspense and passionate romance. She is the recipient of the Daphne DuMaurier Award of Excellence.

Brian hid his shaking hands under his arms. He had spent the last four years waiting for a chance to escape, but now that the opportunity was here it overwhelmed him. He took a slow breath. He was in better shape than he'd been at any of his previous attempts. Which still didn't guarantee that he could break out of his prison and make the two-week trek out of the Malaysian jungle.

"We'll be back in three days, four at the most," Jamil, the guerilla group's leader, said to his younger brother on the other side of the clearing, the tension obvious between the two men even from a distance.

The steadily pattering rain drowned out the younger man's reply. The mesh of banana leaves Brian had woven among the top bars of the tiger cage leaked here and there, but the makeshift roof kept the worst of the weather off him. He watched his captors from the corner of his eye, keeping his head turned toward the trees. He didn't want them to know he was paying attention.

"Haven't you wasted enough time trying to convince everyone Hamid is wrong?" Omar raised his voice and could be heard now even over the rain.

"We've become like old women, talking around campfires. Bullets win wars, not talk." He spat the words. "We can start by sending this one's head —" he jerked his thumb toward Brian " — to the city."

Jamil lifted a placating hand. There was a presence to the older man, a careful dignity that the others lacked. "We are freedom fighters, not terrorists."

And that's where he was wrong, Brian thought. Jamil and a couple of the older men in camp might have started out as freedom fighters, but Omar and his young friends were in this for entirely different reasons. They liked the outlaw power of bending to no government, taking what they wanted when they came across someone weaker.

Jamil nodded to his men and disappeared into the jungle with them. Brian stared straight ahead, not looking at the remaining fighters, but aware of each and every one. The small guerilla group consisted of about three dozen men. Eight had gone for supplies two days ago. Jamil was taking six to talk alliance with a larger group on the other side of the mountain.

For the next few days, the camp would be as thin as ever, and tomorrow night Ahmad would be on guard duty. Ahmad would let him go to the bathroom without pistol-whipping him first for the bother, or standing behind him the whole time with a rifle barrel pressed between his shoulder blades.

Just a little longer. Just another day. Brian closed his eyes. He needed some sleep, to have as much energy as possible when the time came. The familiar noises of the jungle filled the night, the chorus of frogs interrupted now and then by the shrill cry of a bird, the buzz and chirp of a million insects filling in the occasional silence.

His mind drifted, but something prickled at the edges of his consciousness. Something was missing. The camp was quiet. Unnaturally so. No human voices joined that of the jungle. He opened his eyes.

Omar still stood on the same spot, but a dozen of his men were gathered around him. Now what? He watched as some kind of silent communication passed between them and the men melted into the jungle one by one.

Minutes passed, then came the sounds of gunfire from the distance. Some of Jamil's men jumped up and ran into the forest. Brian swore under his breath. If Omar managed to wrest leadership of the group, he was finished.

A good hour went by before the last gun fell silent, and not long after that, the first fighters returned to camp. Jamil's men were not among them.

Brian swallowed his desperation and tried to catch Ahmad's eye. If he could get the younger man to come over, let him out of the cage... But Ahmad was busy at the other end of the clearing, joining the celebration that had begun.

It didn't take much before half the camp was drunk and the other half well on their way. Brian looked up at the darkening sky. They hadn't come for him yet, but he knew Omar would get to it sooner or later. Whether or not to keep their prisoner alive had been one of the main disagreements between the brothers. Omar would want to reassert his new authority by making a point.

He had to go. Now. "Ahmad," he called out on a low voice when the man walked near him.

The young fighter turned to see what he wanted, but then stopped, his attention drawn to a commotion at the edge of the clearing. The group that had gone off for supplies was returning.

So much for taking advantage of a sparse camp. What the hell were they doing back? The trip to the nearest kampongs, the few villages that were this high up the mountain, usually took five or six days.

And then he saw the hunched figure they were shoving in front of them.

He leaned forward to get a better look at the young man. No, not a kid — it was a woman. Definitely a woman.