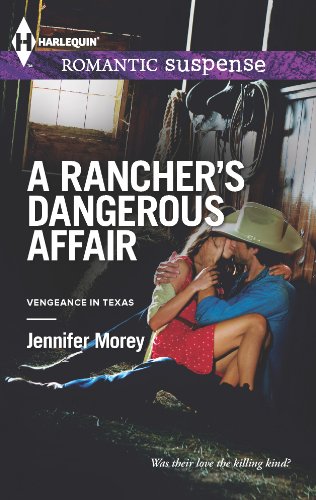 "You still push every one of my buttons."

Not long after Eliza Harvey-Reed got married, her husband David's infidelity proved she married the wrong brother. But was Brandon Reed, her old high-school flame, the right one? Now Eliza's back in their hometown of Vengeance, Texas. And when she first lays eyes on Brandon, it's obvious the heat between them is as all-consuming as ever.

Brandon Reed's still furious that Eliza married his brother. Even more frustrating is that he can't help being drawn to her like a moth to a flame. But when David is murdered, Eliza tops the suspect list. Now Brandon must help clear her name before the real killer destroys his second chance at true love....

Two-time RITA nominee and Golden Quill winner, Jennifer Morey writes her happy endings in Denver, Colorado. Aside from writing great contemporary and page-turning romantic suspense, she has a geology degree and consults compliance with the International Traffic in Arms Regulations. She loves movies, her three dogs, and her honey--not necessarily in that order! You may contact her through her website, www.jennifermorey.com

Eliza Harvey-Reed always felt better when she was busy planning parties. Just a day into her vacation and she already missed the hustle and bustle of Effervescent Events. She'd made a name for herself in Hollywood and had a reputation for delivering flawless, flamboyantly entertaining service. Fun. Exciting. Newsworthy. That was her business. She'd rather be back in California than in her hometown of Vengeance, Texas, climbing out of the rental car to visit her husband's brother, the object of a teenage crush she'd never quite forgotten.

Except, to her, it had been more than a crush. She hadn't realized how much more until he'd ended their relationship. Things had grown hot and heavy between them. He had begun to rule her world. She'd had so much ambition back then. Still did. He had begun to feel like an anchor, a hot, hard, sexy anchor, but an anchor nonetheless. And then he'd dumped her. Out of the blue. She hadn't seen it coming. If there was to be any dumping going on, she had thought it would have been her. He'd begun to matter more than he should.

Sometimes she wondered if his rejection had elevated him to some unnatural level of importance. People always wanted what they couldn't have. More expensive cars. Bigger houses. Better vacations. More chocolate. When denied these things, they became suspiciously more important. Brandon Reed had become too important.

Walking toward the front porch of the Reed Ranch house on a wide stone circular driveway, Eliza noticed her husband, David, look behind him again. He kept doing that. When they'd turned onto the long dirt road leading to the ranch, he'd checked the rearview mirror more than once. When he'd gotten out of the car, he'd checked the road. Now he was doing it again.

Her long, dark brown hair waved in the slight breeze as she looked toward the road. No cars. No people. No animals. It wasn't dark yet. A winding dirt road disappeared over a hill several hundred yards away. The expensive copper fence lined one side; a carpet of green grass rolled to the edge of a thick stand of trees.

"What's the matter?" she asked.

His austere profile only stoked her concern. "Is Brandon expecting more company?"

That meant leave him alone. He'd changed since they'd run into each other at one of her parties and followed impulse to a quick Vegas wedding. He never talked to her about anything that bothered him. She tried to get him to open up, but he always responded with short answers. If there was one thing she'd learned about him in the short time they'd been married, it was that David Reed could keep secrets. Had those secrets gotten him into trouble?

His dark brown eyes scanned the surroundings again. A couple of inches shorter than Brandon's six-two, he was handsome and blonder but not as rugged as his brother. Why she always made those comparisons, she'd rather not examine.

"You're acting like Bruce Willis in one of his Die Hard movies."

"Did you piss off a hacker or something?" She couldn't help her sarcasm. He was nothing like Bruce Willis.

He scowled at her before stepping onto the porch. This was how they spoke to each other now. Why had she married him, anyway? She was afraid the answer was just on the other side of the door.

Brandon Reed had captured her heart when she was sixteen. Try as she might to capture his all those years ago, she'd never succeeded. Absurdly, she thought marrying his brother would trip him up. Get him to realize what a mistake he'd made letting her go. Well, all she'd gotten was a terse congratulations over the phone and a question on where her next party was. He may have been jealous. He may have been unaffected. Eliza had no idea which. With him, reactions were never easy to ascertain. The man wore his personality like a sunken ship, hidden treasure locked away in a deep abyss. He and David had that in common. Except Brandon's mysteries lured her more than David's.

David froze at the door.

Eliza turned. At the top of the hill, a car had appeared. Instead of driving to the house, it made a U-turn and vanished. Who was that? Someone who was lost? Or was it David who'd attracted them here?

"Is someone following you?" she asked.

Turning his grim face away from the road, he opened the door without responding.

"You've been acting weird lately." Inside, she put her purse down on a table against the wall, vaguely aware of another purse there.

"No, I haven't." He quietly closed the door.

She faced him. "David. Talk to me. What's going on with you? Is someone after you?"

"Eliza," he complained, stepping past her with an admonishing look.

Sighing with exasperation, she stepped from the new marble flooring of the entry to the hardwood floor of the living room. Earth tones and splashes of red accents popped out at her. The exposed vaulted ceiling extended to a formal dining room. Brandon must have hired someone to do the decorating. She couldn't picture him doing it. A lot of years had passed since she'd seen him, but he couldn't have changed that much.

As she heard voices in the kitchen behind a partial wall, Eliza's heart jolted with shock. There was a purse on the entry table. Brandon wasn't alone. A woman was in the kitchen with him. Why was she nervous about seeing him, regardless of whether he was with another woman or not? She was married. There was no chance for them. There never had been. So why did she still put so much importance on him?

The woman laughed, flirtatious, warm and soft. Eliza's stomach soured with more churning. "We should have called to let him know we were early." They weren't supposed to be here until tomorrow.

David stopped, turning toward her. "Don't like it that he's with someone else, huh?"

"Why would that bother me?"

She smirked. He'd started accusing her of marrying him to spite his brother shortly after their wedding. She'd fantasized about making Brandon jealous, that's all. There had never been a time that she actually believed he would be. If only that were possible. Brandon didn't care about her.

Now he was going too far. "Is that why you cheated on me four months after our wedding?"

"Yes." He started toward the kitchen again.

His cruel reply dug deep. He hurt her when he talked to her like that. Did he really think she was still pining for his brother? Why had he married her then? Brandon was her first love. They were kids when they were together. She'd never forget him because he'd been her first. That didn't mean she still wanted him.

Maybe this was about more than David's insecurities where his brother was concerned. David shared her enthusiasm for parties, but he overindulged. Women. Alcohol. Drugs. If she didn't know better, she'd think he was one of her famous Hollywood clients instead of a sports journalist and husband.

Eliza crossed the living room behind David, hearing dishes clanking and the soft tone of the woman's voice. The dread she'd felt ever since boarding the plane in L.A. intensified.

She wished David would have done as she had asked and taken her to a hotel. She'd planned a big birthday party for her brother tomorrow night and had a lot of loose ends to tie up. She'd rather do that than face Brandon with his latest lover.

The dread wouldn't ease. Normally, when she visited Vengeance, it was for business. She only squeezed in enough time to see her brother, and those visits she always kept deliberately short. Ryker Harvey never missed an opportunity to point out how lucky she was to have escaped this town. She didn't understand why he wasn't happy. He had a really great wife and two adorable children. He ran an auto repair shop in town and had a stellar reputation. Everyone loved him. What more could he possibly want?

She hoped her party would smooth things over between them. He hadn't seemed very excited the last time she'd spoken with him.

Eliza entered the kitchen behind David. A news program broadcasted from a small television hanging in the far corner. Brandon's deep chuckle ended abruptly when he looked up and saw them, those golden-brown eyes going hard as he spotted her. His thick, shaggy, dark blond hair was a little on the messy side, and stubble peppered his jaw. He'd aged but in an appealing, masculine way. Rugged. Just like she remembered.

The woman he was with had long dark hair like Eliza's and beautiful blue eyes. Eliza's were blue-green. Brandon's tall, muscular body dwarfed her, his broad shoulders sloping and his biceps bulging as he held the woman around her tiny waist. Eliza was slightly taller than her. Did Brandon prefer smaller women? Not that Eliza was big. She had a nice shape.

He stepped back, and the woman's smile slipped as his hands left her. "I didn't hear you come in."

David walked farther into the kitchen, stopping next to the long island. "We decided to come a day early. Eliza has a lot to do before her brother's birthday party tomorrow night."

Brandon continued to stare at Eliza.

"We're planning to attend," the woman said, leaning against him, angling her head as though trying to capture his attention.

The woman with him straightened, eyes taking on the threat that Eliza must present. "I'm Jillian Marks. Brandon's girlfriend."

"Sorry," Brandon said. "Jillian, this is my brother, David."

Book Description Condition: New. You still push every one of my buttons.Not long after Eliza Harvey-Reed got married, her husband David's infidelity proved she married the wrong brother. But was Brandon Reed, her old high-school flame, the right one? Now Eliza's back in their hometown of Vengeance, Texas. And when she first lays eyes on Brandon, it's obvious the heat between them is as all-consuming as ever.Brandon Reed's still furious that Eliza married his brother. Even more frustrating is that he can't help being drawn to her like a moth to a flame. But when David is murdered, Eliza tops the suspect list. Now Brandon must help clear her name before the real killer destroys his second chance at true love?. Seller Inventory # 9780373278107