Items related to Under the Autumn Sky

Talley, Liz Under the Autumn Sky

Under the Autumn Sky 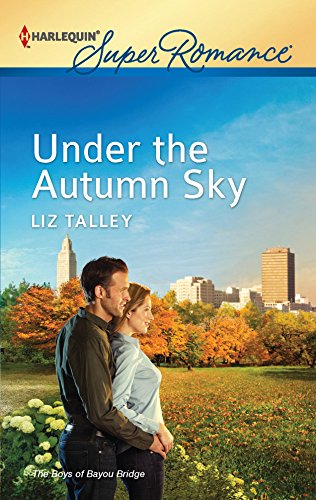 College football coach Abram Dufrene won't risk destroying his career for anything. He's sacrificed too much to see his hard work and integrity go down in flames. So when an innocent but passionate encounter with a sexy stranger forces him to choose between business and pleasure, the decision should be simple.

Too bad nothing about Louise "Lou" Boyd is simple. She's had him hooked since the second he met her. But she's the guardian of the athlete he's recruiting, which puts her off-limits. With all eyes on them, it's only right to keep his distance from Lou. Yet, for the first time, doing the "right" thing feels too wrong....

Liz Talley writes romance because falling in love is the best feeling a person can experience. A 2015 RITA finalist for long contemporary romance, Liz has found her niche writing sassy contemporaries with down-home warmth and Southern charm. She lives in North Louisiana surrounded by a loving family, three dogs, a mean kitty and towering loads of laundry.

Abram Dufrene hadn't wanted to cover Daryll Moreland's recruiting area any more than he wanted to lick a donkey's butt, but there was no choice in the matter. Louisiana University's head football coach Leonard Holt's word was law, so Abram sucked it up, grabbed a coffee and hit the road in his quest for the next best wide-out or bone-cruncher for the Panthers.

Pulling Abram from his old recruiting area covering Mississippi through Florida didn't bother Coach Holt. He didn't have a mother living west of Baton Rouge in the new recruiting area, did he? No, his mother was far, far away in his native state of Ohio. Didn't Holt know Abram couldn't pass his birthplace of Beau Soleil and not stop in? His mother had eyes and ears all over the state of Louisiana. Somehow she'd know and the guilt trip would start. Abram had never been able to get away with anything. His mother always found out.

Not that he was a momma's boy or anything.

No, quite the opposite, but Picou Dufrene was like the hurricanes that often ravage the Louisiana coastline—she hit with a fury leaving a person standing among rubble blinking up at the sparkling sun wondering what the hell had happened. She killed with a smile...and an assload of guilt.

So he'd stopped by the home place, a near-to-crumbling Greek revival plantation several miles from I-10 between Lafayette and Baton Rouge, gulped down chicory coffee and some of the housekeeper Lucille's buttermilk pie, and listened to his mother prattle about his brothers—and his sister, who'd recently been reconciled to the family after having spent years presumed dead. Sally was always part of the conversation.

"You are coming to my birthday dinner on Friday?" his mother had asked when they stepped out onto the veranda. It wasn't a question. It was a reminder.

"Of course. I should be there."

Picou's blue eyes narrowed even as she smiled. Which was hard to do, but the woman mastered challenges.

"Will," he said, shuffling his travel schedule in his mind. He'd totally forgotten her 60thish birthday. His future sister-in-law, Annie, had sent him an email reminder last week, but he'd skimmed over it. Lots more in his inbox that needed attention.

"That's my sweet Abram," his mother said, giving him a kiss on the cheek goodbye, making him feel like he was a seven-year-old child. How did mothers always do that?

The side trip to Beau Soleil had put him off schedule by a good two hours, but as he neared the small town harboring the state's best prospect at tight end, Abram's focus shifted to his job. He was confident he could land this kid.

Yawning, Abram studied the straight dark highway ahead of him before switching off the heat and turning up Better than Ezra on the radio.

The spring game had revealed the need to pad the roster at tight end, and as much as he needed rest from the marathon recruiting season and the grueling spring practice schedule, he knew he had work to do. Always work to do when one coached a top-tiered Division I football team. Even on vacation, he worked. But it was what he wanted.

What he'd wanted since the day he'd hung up his own cleats—to coach at his alma mater.

So he shut up and put up, and did whatever it took to do his job and do it well. He was the youngest position coach on the University of Louisiana, Baton Rouge, staff and he was still hungry.

Which was why he was currently headed up Interstate 49 toward the small town of Bonnet Creek, a dot on the map, but current home of Waylon Boyd. Boyd was a big drink of water at six foot five inches, two hundred thirty-five pounds. Good hands, nice physicality and covered major ground on his runs. He reminded Abram of Jeremy Witten, so he'd kept his eye on Waylon ever since he'd seen tape on him last October.

When the boy had shown up for Junior Day on the ULBR campus, Abram had taken a special interest in the prospect. A nice 4.63 on the 40-yard dash combined with marked improvement on his quickness, meant Abram wanted Waylon on the Panthers' roster come 2012. Tomorrow began the period in which he could make his first call to Waylon, but he never discounted the importance of contact with a recruit's head coach. Some things were better done in person.

The exit to Ville Platte materialized in the vacant landscape, and Abram, stuck on the left of an eighteen-wheeler, blew by it.

He looked at the empty water bottle in the cup holder and groaned. Maybe he shouldn't have drunk the entire thing on top of the coffee. He ignored his full bladder and charged forth. He'd take the next exit for Chicot State Park and head back toward Ville Platte, where he had a room for the night since there was no motel in Bonnet Creek. Sleepy Town Inn. He'd stayed in worse, he supposed, but he wasn't looking forward to a lumpy bed and King of the Hill reruns. Maybe he could find a place to wet his whistle close by so he could wind down.

And like a wish bestowed, a large rambling honky-tonk appeared ahead of him on the right.

Normally he wasn't spontaneous, but he had to take a leak. And a beer would help him sleep. He jerked the steering wheel, sending his big F250 into the gravel lot off the cedar-clad, tin-roofed building, taking the last spot.

Music spilled out into the cool air, raucous and inviting. This wasn't a simple bar and grill where one sat alone watching an NBA game while nursing a long-neck. No, this sounded like Ladies' Night at a college bar. He glanced around. The lot was full for a Wednesday, filled with big trucks like his, many with camouflage accessories and most with ULBR license plate holders and decals.

Abram looked down at his purple sweater vest with the ULBR logo over the breast.

He'd be swarmed by the ULBR faithful as soon as they saw the businesslike athletic department moniker on the breast of the sweater. They'd know he was part of the program, and after a less than impressive spring game shown on ESPNU, he'd not be able to find any anonymity in the out-of-the-way dive.

He pulled the sweater vest over his head, leaving his white oxford button-down, thankfully clean of logos. He squinted at himself in the rearview mirror and smoothed the light brown hair that stuck up from the static in the sweater. Not bad.

He climbed out, sliding his keys in the front pocket of his jeans and his wallet in the back.

One beer, then he'd be off to Ville Platte.

No harm in that.

Lou Boyd tripped over a stone surrounding the sign proclaiming Rendezvous as Home of the Legendary Cooter Gilbeau, which she thought was quite a reach since Cooter had only been a percussionist for the Charlie Daniels Band for one year. But whatever. She guessed old Cooter was proud of his cowbell days. She frowned down at the red stilettos her friend insisted she borrow. Hell of a shoe to wear when walking through a loose-gravel parking lot.

"Hurry up, Louise," Mary Belle Prudhomme called, swishing toward the broad steps of the honky-tonk in her own too-tight jeans and a skimpy top. "I told Bear I'd be here over an hour ago. He's probably got some little slut in his lap already."

"You mean other than you?" Brittney Wade, the bookkeeper for Forcet Construction drawled, stopping to wait on Lou. The more practical Brittney had planned the evening and volunteered to be the designated driver, which was good considering Lou felt woozy from the mojitos the girls had made for Lou's twenty-seventh birthday gala. Lou celebrated the small victory in Mary Belle letting her take off the silly tiara the woman had bought her. The shoes were bad enough.

Lou made it up the wooden plank steps, blinking at the flashing beer signs and advertisements for bands playing the honky-tonk soon. She didn't think this was such a good idea. Rendezvous wasn't the kind of place she belonged in...or at least hadn't for a long time. "It's been fun already, girls. We don't have to stay out all night. We have work tomorrow and Waylon and Lori have school tomorrow and—"

"Not another word," Brenda Pierpont warned with one finger. "You're twenty-seven years old and never go out. This is our treat. Don't ruin it for us, 'kay?"

Lou gave the older woman who ran the construction office a pained smile.

"Okay, then," Brenda said, smoothing her orangey hair back and the shirt over her poochy belly. Brenda had been the one who insisted Lou wear makeup tonight and had indulged her own desire to be the host of What Not to Wear by outfitting Lou in her daughter Jillian's wardrobe, namely a too-tight T-shirt that was low-cut and blinged-out with colored sequins. Lou looked like a rainbow had vomited on her.

Lou tackled the last step, praying she'd mastered walking in the shoes that were already rubbing blisters. This was why she loved her steel-toed work boots. But she could do this. For her friends' sake.

Mary Belle turned and swept her with her bright eyes. "You don't look like Lou Boyd. No one is going to even recognize you. Get ready, baby, men are about to be on you like flies on cow shit."

Lou winced. She'd let them kidnap her, and truss her up with tight clothes, makeup and dangly earrings—all with the ultimate intent of taking her to Rendezvous for Ladies' Night to celebrate her birthday.

In all honesty, Lou would have rather eaten chocolate pudding and watched some Netflix, but her coworkers had gone to such trouble and seemed almost giddy about taking her out for fun. "I'm not looking for a man, Mary. Well, not for a while anyway. I can't really date with two kids to—"

"Um, they're in high school now, Lou. And they're not your kids. You're entitled to a life, so stop being a martyr. No one likes a martyr," Brit...

1. Under the Autumn Sky

2. Under the Autumn Sky

3. Under the Autumn Sky Talley, Liz

4. Under the Autumn Sky Talley, Liz