Items related to An Unexpected Pleasure 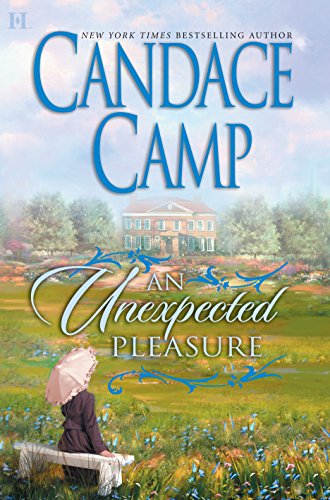 An Unexpected Pleasure by Candace Camp released on Jun 28, 2005 is available now for purchase.

Candace Camp is a New York Times bestselling author of over sixty novels of contemporary and historical romance. She grew up in Texas in a newspaper family, which explains her love of writing, but she earned a law degree and practiced law before making the decision to write full-time. She has received several writing awards, including the RT Book Reviews Lifetime Achievement Award for Western Romances. Visit her at www.candace-camp.com.

Theo Moreland, Lord Raine, rested his hands on the railing and gazed down at the grand ballroom below, a look of discontent upon his handsome face. His green eyes, fringed by smoky lashes so long and thick they would have looked feminine on any face less ruggedly masculine, moved lazily across the floor below, crowded with dancers.

He wondered, not for the first time this evening, what he was doing here.

He was not the sort for elegant parties. He liked much more to be out-of-doors, preferably in some exotic locale, doing something more intriguing...and possibly dangerous.

Of course, Lady Rutherford's ball was dangerous in its own way--ambitious mothers and their daughters circling like sharks--but it was the kind of danger that he assiduously avoided. He wasn't sure why he had come here this evening. He had simply been bored and restless, as he had been many times lately, so much so that at last he had flipped through his stack of invitations, usually ignored, and settled on Lady Rutherford's party.

Once he got here, he had regretted the impulse. Besieged by flirtatious women of all ages, he had finally retreated upstairs to the card room. That, too, had paled, and he'd wound up here, gazing down moodily at the wide expanse of floor below.

"Lord Raine, what a surprise," a sultry voice behind him said.

Suppressing a groan, Theo turned. "Lady Scarle." The woman before him was one of the beauties of London and had been for years. Her coloring was vivid, with jet black hair and deep blue eyes, and a strawberries-and-cream complexion. If the color in her cheeks was not entirely natural or a stray white hair or two had to be plucked out whenever they appeared, well, only her personal maid knew about it, and she was paid well to keep secrets. Most men, truth be known, found it difficult to lift their eyes above Lady Scarle's magnificent white bosom, which was, as was customary, spilling out lushly over the low neckline of her purple evening gown.

"Now, now," she said, smiling archly and laying a hand on Theo's arm. "I think that we know each other well enough for you to call me Helena."

Theo shifted uncomfortably and gave her a vague smile. He had never been good at dealing with rapacious females, and he found women like Lady Scarle even more unnerving than giggling young debutantes.

When he had left London on his last expedition, Lady Helena Scarle had been married to doddering old Lord Scarle, and while she had flirted with Theo, she had been interested in nothing more than a light affair, which he had avoided with little problem.

But when he'd returned a few months ago, he found that Lord Scarle had died, leaving the lady a widow. And the widow was interested in finding a new husband--as long as it meant moving up the social or economic scale. Unfortunately for Theo, he fit both requirements.

Lady Scarle had been on the hunt for him ever since. "I was very disappointed not to see you at Lady Hunt-ington's musicale last night," Lady Helena went on silkily.

"Mmm. Not my sort of thing," he replied, looking about, hoping to see some means of getting out of the situation without seeming rude. Lady Scarle, he had found out, was impervious to almost anything short of rudeness.

"Nor mine," she replied with a flirtatious glance. "But I had thought...well, when we talked last week, we discussed whether we might run into one another at the musicale."

"We did?" Theo blurted out, surprised. He did remember running into Lady Scarle when he was out riding in the Park one day last week. She had chattered on for some time before he could get away, but he had not really been listening to what she said. "I mean, well, I must have forgotten. I apologize."

Temper flashed in her blue eyes--she was not used to being forgotten by any man--but she hid it quickly, turning her eyes down and looking up at him beguilingly through her lashes. "Now you have wounded me, Raine. You must make amends by coming to my rout on Tuesday."

"I...um...I'm almost certain I have an engagement that day. My, uh...Kyria!" He spotted his sister walking across the room, and he waved to her.

Kyria, taking in the situation in a glance, grinned and walked over to him. "Theo! What a pleasant surprise. And Lady Scarle." Kyria's gaze swept over the other woman's overexposed chest. "My goodness, you must be chilled. Would you like to borrow my wrap?"

Lady Scarle gave her a stiff smile. "Thank you, I am perfectly warm, Lady Kyria. Or should I say Mrs. McIntyre?"

"Either is all right," Kyria responded calmly. Tall, flame-haired and green-eyed, Kyria was easily the most beautiful woman in the house. She had reigned as the leading beauty of London society since her coming out, earning the appellation "The Goddess" for her beauty and cool confidence. Even now, approaching the age of thirty and a wife and mother, there was no one who could match her.

Lady Scarle, several years older than Kyria, had been married by the time Kyria had made her debut, but it had put her nose out of joint to watch Kyria assume all the acclaim she had once held. The two women had never been friendly.

"Theo." Kyria turned to her brother and linked her hand possessively through his arm. "I had been wondering what had happened to you. I believe I promised my next dance to you."

"Yes." Theo brightened. "Yes, you did." He turned to the other woman and bowed. "Lady Scarle, if you will excuse us..."

Lady Scarle had little choice but to smile and murmur, "Of course."

Quickly Theo swept Kyria away down the stairs. She leaned closer to him and murmured, "Now you owe me."

"I am well aware of that. I didn't know what I was going to do. I was trying to wriggle out of going to some rout of hers next week. I cannot think what possessed me to come here tonight," he added feelingly.

Kyria laughed. "It isn't like you. I was very surprised to see you."

Theo shrugged. "I was bored, I think. I'm not sure what's the matter with me lately. I've felt...restless, I suppose."

"Ready to go off on one of your adventures?" Kyria guessed.

Theo, the eldest son of the Duke of Broughton, had spent most of his adult life exploring the globe. He had always been fascinated with new and exotic locales, and the physical work and even danger that his explorations entailed only added spice to his trips, as far as he was concerned.

He had returned only a few months ago from his last trip, which had been to India and Burma. Usually he rested and recuperated, spending time with his much-loved family, for a while, before he began to itch to travel again.

"I don't know." He frowned. "Edward Horn is setting up a trip to the Congo. He wants me to go."

"But it doesn't sound as if you want to."

"Not really," Theo replied, puzzlement settling on his features. "I told Horn not to count on me. It's very strange. I've been feeling so restless, yet I don't really have the urge to travel anywhere, either. Perhaps I am getting too old for it."

"You know what I mean. Everyone has always told me that someday I would grow up and tire of travel. Maybe I have." He gave her a crooked smile. "All I know is that every time I think of leaving, something holds me back."

Kyria studied her brother's face, her puzzlement turning to concern. "Theo...are you all right? You sound almost...unhappy."

It was not an adjective she was accustomed to using to describe her brother, who had always entered into everything he did with great zest.

Theo looked at her, his expression serious. "You know me, Kyria. I'm not the sort to examine my life. I don't sit about thinking about what I'm doing, or whether or not I'm enjoying myself. I don't brood."

"No. You are more one to charge into things. You generally know what you want and go after it."

He nodded. "Which is why I think I'm so at loose ends. I feel as if there is something missing. But I don't know what it is. Something I should be doing? Some place I should go? I only know I want something else, something more."

Kyria thought for a moment, then began hesitantly. "Well, perhaps, have you thought that you are at an age where you want to settle down? Mayhap what you are missing is a wife--a home and family."

Theo let out a low groan. "That is certainly what they would all like to convince me of," he said, jerking his head toward the mothers and chaperones massed along the wall, watching their charges dance. "I think I have been introduced to every mother of an eligible girl tonight. I can't tell you how many have hinted that it's time for me to settle down. It's enough to make me run for cover. Are they always this voracious?"

Kyria chuckled, nodding. "Yes. There is nothing more dangerous than a mother out to make a good match for her daughter."

"Aren't these the very same women who have long complained that I am lacking in a proper sense of duty and consequence--always off gallivanting about the globe instead of staying here and preparing to take over the title? The ones who call us the 'mad Morelands'?"

"Yes. But surely you must know that it does not matter how mad one is if one is going to be a duke someday. A title makes up for a great number of sins, and the higher the title, the more sins it obviates. And if you possess a great deal of wealth in addition, well, you could have two heads, and it wouldn't matter."

"It isn't that I am against marriage," Theo mused. "It is simply...well, I cannot envision tying myself to any of these girls, even one as lovely as Estelle Hopewell."

"Estelle Hopewell! Good heavens, I should hope not. The girl hasn't a thought in her head."

"Do any of them? Perhaps it is just being under the watchful eye of their mamas, but every girl I spoke to tonight could do nothing but smile and agree with whatever I said. None of them seemed to have the slightest...

Book Description HQN, 2005. Hardcover. Condition: New. Excellent condition. Interior is tight, bright and clean; no underlining, notes or highlighting. Hard covers are tight and stiff. Complete with original and sticker free paper dust cover. Minor scuffing and/or wrinkles on the paper dust cover. 100% Satisfaction Guaranteed. All items are carefully enclosed with bubble wrap. We ship promptly and worldwide via US Post and will email you a tracking number. Seller Inventory # SKU0059774