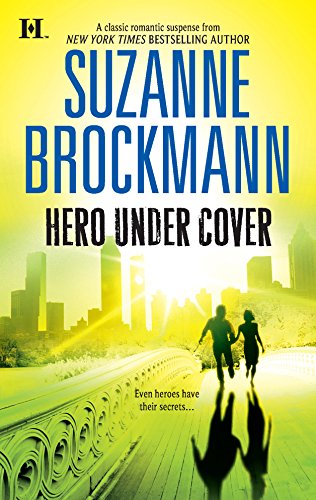 When Pete Taylor first offers his services as a bodyguard, Annie Morgan wants nothingto do with him. She's sure that the death threats against her aren't serious. After all,while the artifact she's working on is valuable, it's certainly not worth killing for.

Butafter someone does make an attempt on her life, Annie is glad to have Pete around. Sheowes him her life, and suddenly, she's beginning to believe in heroes again. And Pete isnow the only person she can allow herself to trust.

Suzanne Brockmann is an award-winning author of more than fifty books and is widely recognized as one of the leading voices in romantic suspense. Her work has earned her repeated appearances on the New York Times bestseller list, as well as numerous awards, including Romance Writers of America’s #1 Favorite Book of the Year and two RITA awards. Suzanne divides her time between Siesta Key and Boston. Visit her at www.SuzanneBrockmann.com.

You're going to do what!"

"A strip search," the FBI agent said, heading for the door. "Please follow me."

Dr. Annie Morrow crossed her arms and planted herself firmly. She wasn't going anywhere, that was for damn sure. "You've gone through my luggage with a fine-tooth comb, you've X-rayed the hell out of my purse, and now you want to do a strip search? This is harassment, plain and simple. You've held me here for nearly five hours without letting me contact an attorney. My civil rights are being violated, pal, and I've had damn near enough."

On the other side of the one-way mirror, CIA operative Kendall "Pete" Peterson stood silently, watching Dr. Anne—nickname Annie—Morrow, renowned archaeologist and art historian, professional artifact authenticator. According to her file, she was thirty-two years old, and one of the world's foremost experts on ancient metalworkings—coins, statues, works of art, jewelry. The daughter of two archaeologists, she'd been born on a dig in Egypt. She'd lived in thirteen different countries and participated in nineteen different excavations, and that was before she'd even attended college.

What the file didn't tell him was that she was filled with a seemingly limitless supply of energy. During the course of the five hours he'd been watching her, she had sat still for only a very short time. Mostly she paced; sometimes she stood, she leaned, she tapped her foot, but generally she moved around the small interrogation room like a caged animal.

The file also didn't describe the stubborn tilt to her chin, or the way her blue eyes blazed when she was angry. In fact, the photo included hadn't managed to capture much of anything out of the ordinary, except maybe her long, shining brown hair, and her almost too-sensuous lips.

But in person, in motion, she was beautiful....

"So that's our little Dr. Morrow," came a voice at his shoulder.

Peterson turned to look at Whitley Scott, the man in charge of the FBI side of the investigation. Scott smiled at him, his eyes crinkling behind his thick glasses. "Sorry I'm late, Captain," he said. "My flight was delayed."

Peterson didn't smile back. "We've been holding her for hours," he said. "She's pretty steamed."

Through the speaker system, he could hear Dr. Morrow still arguing with FBI agent Richard Collins.

"I've told you nine million times, or is it ten million now? I was in England to pick up an artifact—a gold-cast death mask from the nineteenth century—for a client. I wasn't out of the U.S. long enough to do whatever illicit crimes you're trying to accuse me of. The shipping papers for the death mask are all in order—you've admitted that much," she said. "What I'd like to know is when you intend to let me leave."

"After the strip search," Collins said. He was a good man for this job, Peterson thought. Collins could outargue anyone. He was solid, steady and extremely patient. And he was absolutely never fazed.

"She's just your type, Pete," Whitley said, with a sideways glance at the taller man. "Something tells me you're going to enjoy this job."

Peterson didn't smile, but his dark brown eyes flashed in Scott's direction for a microsecond. "She's too skinny," he said.

In the interrogation room, Annie Morrow had had enough. She slammed her hand down on the table, pulling herself up and out of the chair she'd recently thrown herself into. "You want to strip-search me?"

she said. "Fine. Strip-search me and let me get the hell out of here."

She shrugged out of her baggy linen jacket, tossing it onto a chair as she kicked her sneakers off. A quick yank pulled her loose red shirt over her head, and she quickly unbuttoned her pants.

"Why not?" Annie asked much too sweetly, her eyes bright with anger as she stood in the middle of the room in her underwear. "Oh, relax. I have bathing suits that are more revealing than this."

A slow grin spread across Peterson's face. Man, she'd managed to faze Collins. She knew darn well he had wanted her to follow him to a private room where she'd be searched by a female agent. Yet she'd undressed in front of him, simply to upset him. He felt a flash of something, and realized that he liked her—he liked her spirit, her energy, her nerve. He frowned. She was a suspect, under investigation. He wasn't supposed to like her. Respect, admire even, but not like. But, man, standing there, looking at her, he found an awful lot to like.

Annie turned and gestured toward the mirror, hands on her hips. "Don't you think the rest of the boys want to get in on the fun?"

She knew they were watching her. She was really something, really sharp. Her file said she'd had a 4.0 average throughout college, graduating with a Ph.D. in half the time it normally took. He liked smart women, particularly when they came wrapped in a package like this one.

Her bra and panties were both black and lacy, contrasting the smooth paleness of her fair skin. Her breasts were full, her waist narrow, flaring out to slender hips and long, beautiful legs. "I take it back," Pete said to Whitley Scott. "She's not too skinny."

She seemed to be looking directly at him. He could see the pulse beating in her neck. Each ragged, angry breath she took made her breasts rise and fall.

"Do you intend to harass me every time I leave and re-enter the country?" she said.

"You know she can't see me," Pete said, but he motioned for the mike to be turned on. "The Athens investigation," he said, raising his voice so the mike would pick him up, "hasn't been closed."

Annie threw up her hands and began to pace. "Well, there we go," she said. "We're finally getting somewhere. You are trying to harass me. You don't give a damn about this death mask. You still think I have something to do with the jerks that bombed and robbed that museum."

Pete tried to keep his attention on her words instead of her body. But it wasn't easy. She moved like a cat, the muscles in her legs rippling....

"How many times do I have to tell you that I am not a thief?" she continued. "Shoot, I wish I were. It would make this a whole hell of a lot easier. But I'm not about to confess to crimes I didn't commit."

She stopped pacing, coming back to stare directly up at him again. It was eerie, as if she really could see him through the glass.

"There was an explosion and a robbery at the gallery in England two hours after you left it," Peterson said, his voice distorted over the cheap speakers. "This time, people died."

Peterson watched Annie's face carefully as a range of emotions battled through her. Anger finally won.

"So, naturally, you believe Iwas involved. That's great, that's really great. Innocent people die, and the best you guys can do is to give me a hard time as I get on and off planes. You should be over there chasing the creeps that did the bombing, not playing peekaboo with somebody who gets queasy when she cuts her finger, pal."

"Doesn't it seem a little strange that you should go to European art galleries twice in five months, and within hours after you leave, each of them is hit by a bomb and a robbery?" Peterson had been in this business long enough to know that when there was smoke, somebody was trying to hide a fire. He wasn't buying the indignant act. "How do you explain the fact that you left the Athens convention hours before anyone else?"

"I don't!" Annie countered, eyes aflame. "I've already told the FBI, and the CIA, and everyone else who's asked, that I left because I'd seen everything at the exhibit and I wanted to catch an early flight home." She was pacing the floor now, clearly upset. "What ever happened to innocent until proven guilty? Huh? Just what the hell is going on here?" she shouted, right through the glass at Peterson.

There was silence. Big fat silence. It disarmed her as Pete knew it would. Dr. Anne Morrow was low on patience, and impatient people didn't like being made to wait. She turned, gathering her clothes. "If we're through..." she said pointedly.

"But we're not," Pete said. "It's called a strip search for a reason."

What little remained of her patience snapped. "Oh, give me a break," she said, throwing down her clothes and striding over to the mirror. She came up really close—close enough for Pete to see the details of her thick, dark lashes and the streaks of lighter color in the deep blue of her eyes. Close enough for him to see that her skin was as smooth and soft as it looked. If the glass of the window hadn't been between them, he could have lifted his hand and touched her.

Peterson felt Whitley watching him, and somehow he managed to remain expressionless. But, man, it had been a long time since he'd looked at a woman and wanted her this badly. It had been a real long time.

"I assure you that everything I'm hiding in my underwear is attached, pal," she said. "No removable parts."

"What exactly are you looking for?" she asked. "Maybe if you tell me, I can check and see if I've got it on me somewhere."

"You ever hear of mules?" Pete asked.

He'd managed to shock her, but somehow he didn't feel triumphant about it. "Mules are people who smuggle illegal substances into the country inside their bodies," he said.

"I know what a mule is," she said. "Tell me honestly, do you really think I've swallowed the crown jewels? Whole?"

"Not swallowed," he said, and then was silent, letting her figure it out for herself.

beneath her tan, and her freckles stood out. "We're really trying to go for total humiliation here, aren't we?"

"Just going by the book," Pete said. "And the book says that you'll be searched—completely. We have a physician waiting in another room."

"Oh, you mean you don't want to do it right here?" Annie said. She was furious. He could almost see her pulse accelerating as he watched the ...