Items related to The Texan's Bride 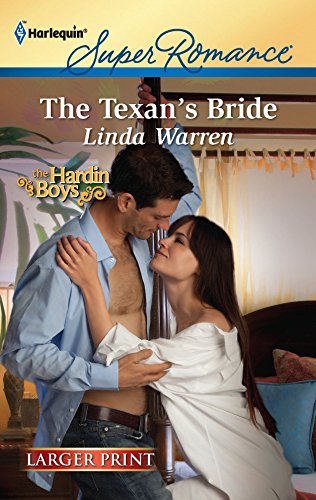 Sheltered her entire life, Jessie Murdock has rarely gotten her way. Until her dying father makes a deal with Cadde Hardin. Cadde will get shares of Shilah Oil on one condition—marry Jessie. In love with him for years, Jessie doesn't hesitate to sign the papers. But she didn't sign up for a completely absent husband.

Now Jessie has a counter offer. She'll give Cadde controlling interest of the business if he'll give her a baby...the natural way. Only he has a few caveats of his own. When life refuses to follow their written plan, Jessie and Cadde have to decide which is more important: their unspoken love or the family business.

Linda Warren loves happy endings. The Rita® nominated author has written 26 books in the last ten years. Drawing upon her years of growing up on a ranch in Texas, she writes about sexy heroes, feisty heroines and broken families with an emotional punch. She lives in central Texas with her husband, and spends her days doing what she loves—creating unforgettable love stories—with happy endings.

Cadde Hardin always thought he'd eventually get married. He just never dreamed it would be a marriage of convenience.

And a pain in the ass.

"One of these days I'm going to wring her damn pretty neck."

He threw his briefcase onto the desk, scattering piles of folders, and slam-dunked his body into a leather chair, which protested with loud, annoying squeaks. He was so angry he could barely breathe.

How many more times was Jessie, his wife, going to stab him in the back?

His brothers, Cisco—known as Kid—and Chance stood in the doorway. "Is it safe to come in?" Kid asked.

"What the hell happened?" Kid wanted to know. "You said you had it handled, but once again Jessie shot down your proposal."

Cadde yanked off his tie. "I'm well aware of that." For a whole week he'd been telling Jessie how much he needed her vote at Shilah Oil's next board meeting. The company had to move forward. She had agreed, but evidently she'd changed her mind, voting against expanding drilling outside of Texas. He could feel his blood pressure rising by the minute.

"What did she say when you told her about the proposal?" Chance asked, taking a seat.

Cadde threw the tie onto the desk. "She said it sounded like something her father, Roscoe, would do. He was always a wildcatter, a risk-taker."

"Did she agree to vote your way?" Kid plopped into a chair and rested his boots on the desk. Usually, Cadde would knock them off, but today he wasn't in a mood to fight with Kid. Jessie and her about-face was all he had on his mind.

"Sounds as if she's still pissed about the marriage," Kid commented.

"I didn't force her into this arrangement. Roscoe was dying and he wanted me to protect her, to take care of her, and I agreed."

"For a piece of the pie," Kid murmured under his breath.

He glared at Kid. "Don't start with me today."

Chance spoke up. "Face it, Cadde, she has to be upset at having her husband chosen for her."

"She was there when Roscoe made his wishes known. She didn't object or get angry. She accepted her father's decision."

"Dammit, Chance." Cadde swung out of his chair and stood to gaze at the view of Houston, but all he saw were Jessie's dark eyes. Swinging back, he said, "Don't you think I'm aware of that? I'm at my wit's end on how to handle Jessie."

"Since I'm an expert on women—" Kid formed a steeple with his fingers and looked at Cadde over the top "—I'd say Jessie wants something...and she wants it from you."

"What would that be, Kid?" Cadde asked in a sarcastic tone.

"I don't know, but whatever she's angry about is aimed at you."

"Shilah Oil is going nowhere without her support on the board," Chance said. "So your best bet is to have an honest-to-god talk with her."

"It might be as simple as a divorce," Kid added.

Cadde frowned. "You think she wants a divorce?"

Kid shrugged. "What else could it be? I mean, Roscoe sheltered her all her life. She's probably looking for some sort of freedom. And fun—preferably not with a man handpicked by her father."

Chance turned on Kid. "You don't know that. He needs to talk—"

"I'll see y'all later," Cadde said, grabbing his briefcase and heading for the door.

"What? No orders?" Kid's pesky voice followed him.

"Get your damn feet off my desk! Chance, I want the drilling log on the Carver well when I return." Why had he brought his brothers in on this oil venture? They had a way of getting under his skin. But the truth was he needed their expertise to make Shilah Oil a successful company. Besides, they were brothers who stood together in rough times and in good times.

Right now Cadde didn't want to think about his siblings. Jessie occupied every corner of his mind.

In record time he was in his truck and driving north out of Houston toward Brenham. Maybe he and Jessie could talk and work things out. The knot in his gut eased a little.

Lord knew he didn't enjoy the marriage any more than she did. The first time he had dinner at the Mur-dock estate Roscoe had made it very clear that his daughter was off-limits, so he was shocked when Roscoe had brought up the suggestion of them marrying. He'd told the man he would look out for Jessie, but he didn't see any reason for a legal ceremony. They didn't love each other. They were barely more than acquaintances.

He'd never paid much attention to Roscoe's daughter, and he'd thought she'd grown to be an unattractive old maid without much appeal, except her father's wealth. As for Roscoe—it had been said that he resembled the back end of a horse going the wrong way. The man wasn't handsome by any means and Cadde had assumed his daughter favored him. He'd been mistaken.

Roscoe was big and barrel-chested with a booming voice that could make babies cry. Jessie was just the opposite; slim, feminine and beautiful with long dark hair and the blackest eyes he'd ever seen. She obviously took after her mother. Roscoe never spoke about his wife and there were no photos of her in the house.

That first night Cadde had dined with the two of them, he looked everywhere but at the gorgeous woman sitting across from him. No way did he want Roscoe to catch him eyeing his daughter. That would put an end to his oil career. He played the part of cool indifference well, and the status quo remained the same every time he visited the Murdock estate.

He'd spent a lot of years working toward one goal—owning his own company. He, Kid and Chance had roughnecked all over Texas. They knew the oil business. He wasn't jeopardizing that goal by acting stupid. Jessie was his boss's daughter and in his eyes that meant she was off-limits.

Then, Roscoe being the gambling wildcatter that he was, sweetened the pot.

"How long have I known you, boy?" Roscoe had asked that day in his hospital room.

"A little over ten years."

Roscoe nodded. "You roughnecked on a wildcatter well. I saw you had potential and I brought you into the office. You've been my right hand since then."

"Yes, sir. I've learned from you and I'll always appreciate the opportunity you gave me."

"What?" Cadde wasn't sure where the old man was headed with the conversation.

"I'm not asking you to marry Jessie. I'm telling you."

That took a moment for Cadde to digest.

"I've always been a gambler. You know that. Tomorrow I'm taking the biggest gamble of all...they'll remove the tumor from my brain. The doctors say I have a fifty-fifty chance of surviving the surgery and I'm willing to take that risk. I'm damn tired of the headaches and losing my eyesight, but I can't go under the knife until I know Jessie's future is secure." "Sir..."

"Okay, boy," Roscoe interrupted, not willing to listen to anything he had to say. "I'm gonna make this easy for you. Marry Jessie and I'll give you half of my shares in Shilah Oil. Jessie gets the other half."

That sent Cadde's heart galloping like a wild steed.

"The papers are there on the nightstand. They require your signature to become the CEO of Shilah Oil." Roscoe took a labored breath. "Sign it, boy, because I'm not giving you any other choice. You've got integrity. I've known that from the start, and you'll keep Jessie safe."

Fear choked the man's voice. Roscoe's paranoia was never more evident than it was that day, but Cadde had to ask, "How does your daughter feel about this?"

Jessie walked into the room in a brown pantsuit and heels. Her dark hair was coiled into a knot at her nape. She looked elegant, sophisticated and uptight as any woman could be. The only sign she was nervous was the false smile on her face.

"Here's my baby," Roscoe said, and held out his hand.

She grasped it. "Daddy, I'm hardly a baby. What are you doing talking business with Mr. Hardin? You should be resting."

"I can't rest until I know your life is secure."

"I'm serious, Jessie. Marry Cadde." Roscoe took another tortured breath. "We've talked about this and it's the right thing to do. Cadde knows the oil business and he'll keep Shilah profitable so you'll never want for anything. Please, baby."

Jessie met Cadde's eyes for the first time and their depths bore right through him. "Has Mr. Hardin agreed to this?"

She turned back to Roscoe. "Daddy, you do realize I can take care of myself? I'm twenty-nine years old."

"Don't argue with me, Jessie. Please let me die in peace. I have to know you're safe."

Tears welled up in her eyes and Cadde felt a sucker punch to his chest. She hugged her father tightly and then straightened. "Okay. I guess I'm getting married."

They had the ceremony that afternoon by Roscoe's bedside and Cadde signed the papers that gave him a large interest in Shilah Oil. The next few hours were tense as they waited for news that Roscoe had survived the surgery. He hadn't. He'd died on the operating table.

Losing Roscoe had been a big blow. He thought the old man could win at anything, but the stakes were too high this time. Pushing aside his grief, he tried to comfort Jessie by offering to take her home. That was a huge mistake. She lit into him like a dog in a chicken coop.

"Contrary to what my father believes, Mr. Hardin, I can take care of myself and deal with Daddy's death...on my own."