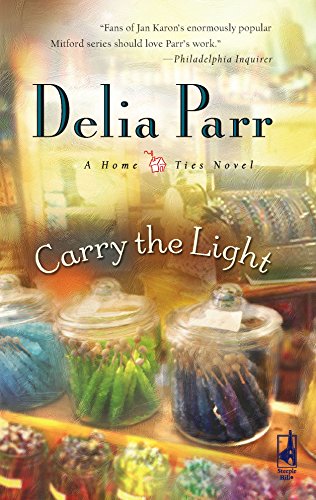 Ellie Waters usually juggled career, family and church commitments with ease. But when her mother fell ill, coping suddenly seemed overwhelmingly difficult. For help she looked to the past—and within her deepest self.

Charlene Butler, wife, grandmother and businesswoman, was enjoying a bright, new chapter of her life. But her aunt Dorothy?s medical crisis suddenly made Charlene wonder how solid the foundation of her world really was.

On their journeys of discovery, these two very different women met, shared the burden of being caretakers, and in doing so they became best friends. Together they laughed, prayed and found new strength and new depths to their faith.

Escape was only a few steps away.

With that thought, Ellie Waters maneuvered through the maze of high school students reluctantly edging to their next period class, slipped inside her office and shut the door behind her. The room was not much more than a supersized closet, but it was her own space and she loved every crowded inch of it.

She made her way past two cartons of new textbooks sent by publishers to be considered for adoption, eased into the wooden chair at her desk, leaned back, closed her eyes and took a deep breath. Ten quiet minutes; that was all she needed to regroup and replenish her sagging energy.

It was only noon, but she had already taught four classes, met with her supervisor for her annual performance review and had a parent conference. By hiding here and managing the paperwork that was only a part of her duties as the language-arts department head at Welleswood High School, she might be able to finish the school day in peace. In quiet. And without interruption. She sighed, fully hopeful her plan would work.

Until the telephone rang.

She opened one eye, stared at the offending instrument and wondered if there was an alarm attached under her chair that alerted the outside world that she finally had some downtime. When the telephone continued to ring, she opened her other eye, resisted the urge to answer and let out another sigh.

Just once, she would love to have ten minutes to unwind after changing hats from classroom teacher to department head. She had been the language-arts department head here for seven years now, but she had been teaching here for over thirty-five years. From experience, however, she knew that the pace of the school year was rapidly heating up now that March had arrived, and peace and quiet would be very precious commodities.

At the moment, she didn't want to think about the school-board election next month or whether the community would vote to accept or reject next year's budget. Nor did she want to think about the pressure she would soon be under from parents eager to make sure their children were recommended for advanced classes next year. But she did have to think about parent conferences scheduled for that evening, which made for an extra-long day today and an extra-tired day tomorrow, a Friday. Fortunately, she had the weekend to recover, and she looked forward to spending two very quiet, very peaceful days at home, grading the mini research papers she had collected this week.

The telephone continued to ring. Apparently, the caller was not giving up, but Ellie, just as determined to finish her paperwork before the parent conferences tonight, was letting the call go to voice mail. This year's senior awards for the department had to be reviewed and organized for her supervisor, and if she didn't make a plan to ration the department's supplies, they would run out long before June.

When the telephone finally stopped ringing, then started up again less than a minute later, she let out one final sigh, gave in and reached for the receiver. "No peace today," she muttered, and glanced down at the bottom desk drawer, where she kept a stash of candy. Not every telephone call was a problem or an emergency, but she was ready for either.

When she finally answered the telephone and heard her mother's voice, she opened the drawer. She made a mental note to replenish her stock, and took out three dark-chocolate kisses. "Yes, Mother, I have time to talk now," she said, unwrapping a kiss.

"I left three messages for you earlier, and one just now. You never called me back," Rose Hutchinson grumbled to her daughter.

"I'm sorry. I've been teaching classes and I had meetings all morning. I haven't had time to check my messages. Why are you whispering?" she asked, trying to divert her mother's attention away from her criticisms. She slipped the chocolate kiss into her mouth and let it begin to melt slowly against the inside of her cheek.

"I'm talking as loud as I can manage," her mother replied.

"I'm sick, which you would have known if you'd bothered to call me today."

Ellie straightened her back and swallowed the last of the chocolate kiss. "But I just talked to you last night. You were fine then. What—"

"I know I was fine. Until this morning. I feel awful. My neck hurts and my jaw hurts and my chest hurts. I called Dr. Stafford's office and told the receptionist that I think I have the flu. He can see me this afternoon at four o'clock, but I just don't think I can make it there by myself. I'm feeling too weak. I need you to take me," she whined.

She went on before Ellie could respond. "Unless you're too busy. Then I'll have to take a cab. I'm sure the driver won't mind helping me into the cab or waiting for me while I'm at the doctor's office. Phyllis's daughter always takes her to the doctor's for her appointments, but then, her daughter has the sense to not be working anymore. She's retired now, you know, so she can spend a lot of time with her mother, not that you would consider retiring—"

"I'll take you. Of course, I'll take you," Ellie insisted, interrupting before she was compared unfavorably, again, to her mother's friend's near-perfect daughter.

Resigned, Ellie gave up any idea of taking a catnap this afternoon between the end of the school day at three and the start of parent conferences at six-thirty. Despite her contentious relationship with her mother, she did not resent her responsibilities as an only child. Taking her eighty-five-year-old mother to the doctor had become a frequent task in the past year.

Assuming Dr. Stafford saw her mother on time, which he usually did, and assuming her mother prolonged her appointment for a good fifteen minutes by arguing with the doctor, which she usually did, Ellie would be able to take her mother home, pick up whatever prescription she might need at the pharmacy, bring it back to her mother's home, and still be on time for parent conferences tonight.

Unfortunately, dinner did not fit into this scheme, which meant Ellie would have to rely on the teachers' traditional cookie tray for sustenance tonight—if someone in the administration had remembered to order it.

"I'll probably need you to stop at the store for ginger ale, too. I'll have to drink lots of clear fluids if I have the flu," her mother said.

"I took you for your flu shot, Mother, remember?" Ellie asked, rather than point out that flu season was nearly over.

"Certainly I remember. I'm old, Ellie, but I'm not senile. And just because I had a flu shot doesn't mean I don't have the flu. Last year, Alice Williams got the flu shot and she came down with the flu, if you'll recall."

"I can pick you up at quarter to four," Ellie replied choosing not to continue the argument. "Is that all right or do you need me to come over now?" she asked, with one eye on the mound of paperwork and the other on those two chocolate kisses sitting on top of her desk.

"Quarter to four is fine, but only if you're on time."

Ellie pursed her lips, cradled the telephone against her shoulder and slowly unwrapped another kiss. "I'll be on time."

"Well, I certainly can't do anything about it if you're not. With all the responsibilities you've had at school for the past umpteen years, I can't imagine how you've survived without learning to be more punctual. Unless it's just because I'm not important enough—"

"I'll be there. Quarter to four," Ellie interrupted again. She waited until she heard her mother hang up, then popped the kiss into her mouth.

Enduring her mother's criticism was nothing new for Ellie. She honestly could not remember a single moment in all of her sixty years when she had truly pleased her mother. Rose Hutchinson had already lived a long and full life, and Ellie reminded herself that each day her mother was here was a gift. Each day, however, was also one more day for Ellie to be reminded again of how she had disappointed the one person who mattered most: her mother.

She bowed her head and knitted her hands together. She prayed for patience, for strength and guidance, so that she might find the path that would lead her to discovering the love and acceptance she still desperately wanted from her mother.

At four o'clock, Ellie and her mother were sitting in Dr. Stafford's office. Dressed conservatively in black slacks, a black top and a plaid blazer, Ellie was also still wearing the sensible, lace-up oxfords she wore to school every day. In contrast, her mother had chosen to wear a bright aqua dress, calf-length and ultra-feminine, which did little to complement her full figure, along with pumps, a matching handbag and costume jewelry that included a large turquoise brooch, bracelet and dangling earrings.

Half an hour later, after Dr. Stafford had examined Rose Hutchinson and rendered a tentative diagnosis, Ellie fervently wished that her mother indeed had the flu. "Are you sure?" she asked the doctor. "Mother has absolutely no history of heart trouble, and her cholesterol level has been dropping since she started her new medication. When I talked to her earlier today, she wasn't complaining about pain in her chest or arm. Aren't those the signs that would have told us—"

"Don't argue with the man," her mother interrupted, as if she reserved that right exclusively for herself. "He's the doctor. If he thinks I had a heart attack and I need to go to the hospital, then it's best if I go—even though I'm not convinced he's right, mind you. If you're worried about getting back to school in time for those conferences, you can drop me off at the emergency room. Or I can always go by ambulance, can't I, Dr. Stafford?"

"I do think getting you to the hospital as soon as possible would be best," he said firmly, repeating his earlier recommendation, "although I don't think it's necessary to call for an ambulance."

"I'll drive her to the hospital right away and stay with her," Ellie replied, clarifying her intentions.

"Good. I'll call ahead so they're waiting for you," the doctor said. "Now remember, I'm sending you to the hospital as a precaution, Mrs. Hutchinson. I don't want you or your daughter to jump to conclusions or to panic. The on...