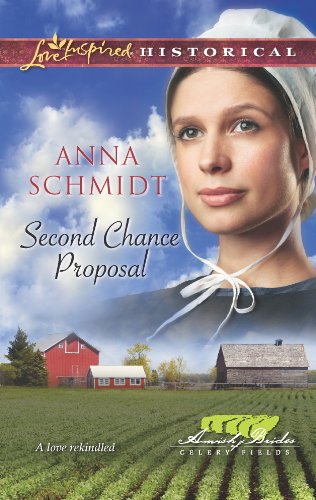 John Amman left his Amish community and sweetheart Lydia Goodloe to make his fortune in the outside world, while Lydia stayed behind to devote herself to teaching. She can accept spinsterhood, and even face the closure of her beloved school. But John's return after eight years tests her faith anew. Lydia hasn't forgotten a single thing about John Amman—including the way he broke her heart.

John risked becoming an outcast to give Lydia everything she deserved. He couldn't see that what she really wanted was a simple life—with him. Lydia is no longer the girl he knew. Now she's the woman who can help him reclaim their long-ago dream of home and family...if he can only win her trust once more.

John Amman closed his eyes, which were crusty with lack of sleep and the dust of days he'd spent making his way west across Florida from one coast to the other. Surely this was nothing more than a mirage born of exhaustion and the need for a solid meal.

But no, there could be no doubt. There she was walking across a fallow field from her father's house to the school. He watched as she entered the school and then a minute later came outside again. She pulled her shawl tighter around her shoulders and began stacking firewood in her arms. They might be in Florida, but it was January and an unseasonably cold one at that. John pulled up the collar of his canvas jacket to block the wind that swept across the open fields.

Lydia went back inside the school and shut the door, and after a few minutes John saw a stream of smoke rising from the chimney. He closed his eyes, savoring the memory of that warm classroom anchored by a potbellied stove in one corner and the teacher's desk in the other. He tried to picture Lydia at that desk, but he could only see her as the girl he'd known—the laughing child with the curly dark hair that flew out behind her as she gathered the skirt of her dark cotton dress and raced with him along the path. The teenager—a quiet beauty, the luxurious hair tamed into braided submission under her bonnet and the black prayer covering girls her age wore after joining the church, as he and Liddy had done when they were both sixteen.

He started running across the field, his heart pounding in anticipation of the reunion with this woman he had loved his whole life. This woman he had come back to find after eight long years—to ask why she had not answered his letters, why she had not believed him when he told her that it had all been for her. He had risked everything even to the point of becoming an outcast from their Amish community and indeed his own family so they could have the life they had planned.

But abruptly he stopped. What was he thinking? That he would go to her and she would explain everything and they would be happy again? How could he face her after all this time and admit that he'd failed? Even if she did open her heart to him, what did he have left to offer her? No job. No money. The disdain of his own family...of the entire community unless he agreed to publicly admit his wrongdoing and seek their forgiveness.

He crouched down—half from the need to catch his breath and half because the wind was so sharp. The door to the school opened again and, this time when she emerged, Liddy was not wearing her bonnet. She hurried back to the woodpile and took two more logs—one in each hand. But it was not the logs that John noticed. It was what she was wearing on her head in place of the bonnet.

When she had entered the school that first time, her head and much of her face had been covered by the familiar black bonnet that Amish girls and women wore when outside. John had assumed that beneath that bonnet she still wore the black prayer kapp of a single woman. But the kapp he saw now was not black but white—the mark of a married woman, someone else's wife. The loose ties whipped playfully around her cheeks as she gathered a second load of wood.

"Fool," he muttered. "Did you really think you would come back here after all this time and find her waiting?"

His stomach growled as he caught the scent of bacon frying, and he glanced toward the house where his family had once lived. After he'd left—and been placed under the bann for doing so—his mother had gotten word to him when the farm was sold. She'd written that she and his father and the rest of his siblings were moving back to Pennsylvania. After that he had not heard from his family again, and now someone else owned the small produce farm that would have been his.

John scuffed at the sand with the toe of his work boot—the sole was worn through and the inside was lined with old newspaper. He hefted the satchel that held what remained of his worldly goods to one shoulder and pulled his faded red cap low over his eyes. He no longer dressed "plain" as he had when he and Lydia had been sweethearts. He doubted that she would even recognize him were he to approach her. He had changed that much, at least outwardly. His gaze swept over the rest of the small town past the hardware store, the livery turned machine shop, Yoder's Dry Goods Emporium, the bakery Liddy's family had owned and back to the schoolhouse and that thin trail of smoke that curled across the cloudless sky.

"Not anymore," John whispered as he turned his back on the town for the second time. There was nothing for him here. He'd been following yet another foolish dream in coming back. Behind him he heard the shouts and laughter of the arriving schoolchildren across the frost-covered field. Then he hitched his satchel over his shoulder and headed east, the way he'd come.

Lydia had a warm fire burning by the time she heard the children gathering in the yard. They were playing tag or hide-and-seek and squealing with delight as someone made it to home base without being caught.

She flipped down the seats of the desks and stood for a moment as she did every morning, asking God's guidance for the day. Then she pulled hard on the bell cord, taking pleasure in the familiar sound in the cold air calling the children inside.

As the children scurried into the school, pausing only to hang their coats and hats or bonnets on the pegs, Lydia turned to close the door. Then she saw a man walking across an abandoned produce field that marked the border between the town and the outlying farms. He was wearing a light canvas jacket and a red cap. Her heart went out to him when she realized that he was not dressed warmly enough for the weather. No doubt he was another of those men who wandered into town now and again in search of work or a handout.

She continued to watch the man as the last of her students—a large lumbering boy who would gladly be anywhere but inside this classroom—passed by her. There was something about the way the stranger in the field moved that was unlike the movements of other vagrants she had observed. Most of those men appeared worn down by their troubles and the harsh realities of their circumstances. This man walked with purpose and a rhythm that fairly shouted defiance and determination. Something about his posture stirred a memory that she could not quite grasp.

Lydia looked up to find her half sister's daughter, Bettina, standing at the lectern ready to lead the devotions with which they began every day. Bettina had passed the age when most girls attended school, but she loved being there so much that Lydia had persuaded Pleasant and her husband, Jeremiah, to allow the girl to continue helping her.

She nodded and Bettina opened the Bible, carefully laying aside the purple satin ribbon that had served as a bookmark for as long as Lydia could recall, even back to the days when she and Greta had been students at the school. The days when they had each taken a turn reading the morning devotions. She permitted herself a small smile as she recalled how the girls had eagerly awaited their turn at reading, but not the boys. And especially not John Amman.

Her eyes, which were normally lowered in reverence for the reading, flew open and focused on the closed door at the back of the room. Something about the man she had seen walking across the fields reminded her of John. The broad shoulders unbowed against the wind. The long, determined stride. Suddenly her heart was racing and she felt quite light-headed, to the point that she pressed herself firmly into the safety of the straight-backed chair.

Was it possible that, after all this time, he had come home? But why now? And why had there been no word from him—to anyone—in all this time? Not a single word.

She closed her eyes as a wave of grief and disappointment swept through her. Even after eight long years the sting of John's leaving was as painful as it had ever been. Bettina continued to read the morning's Scripture. The lesson for the day was the story of the prodigal son and the irony of that reading combined with her memories of John Amman made Lydia wince.

John had walked a good six or seven miles away from Celery Fields before he once again changed his mind. How could Lydia have married another man? But then, how could she not when he had given up writing after a year passed with not one of his letters answered? Still, he had to know who that man was. He had to at least be sure that she had married someone worthy of her.

And if she hadn't? What if he learned that she was miserable? Exactly what did he think he could do about that?

John might have lost most of his worldly goods, but the one thing he had not lost was his faith in God. And he had no doubt that God was guiding his steps as he made his way back the way he'd come. There was some plan at work here, a plan that was driving him home to Celery Fields. Home to Liddy. He just had to figure out what it was. He closed his eyes and prayed for guidance. When he opened them he saw Lydia and her students come out into the schoolyard, where they formed a circle and played a round of dodgeball. John smiled. Lydia had always been very good at the game, but he had been better.

It occurred to him that the best way to learn what he needed to know was to go directly to her. Oh, not to her house. He did not want to embarrass or confront either her or her husband. No, he would bide his time and choose the right moment, the perfect place. And after so many years of silence from her he would finally have some answers.

The unusually cold weather continued as Tuesday dawned with a cutting wind from the north and a slanting rain that came very close to being sleet. An umbrella was useless in such a wind so Lydia co...