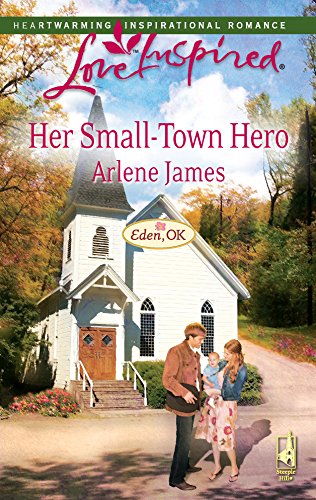 If only someone will take the job so oil rigger Holt Jefford can stop making beds and burning breakfasts. And then someone does: a lovely single mother with a baby boy—and secrets.

Sweet, kind Cara Jane is scared of her own shadow—why? Holt warns himself not to trust his skittish new employee, but watching her with her son and his old granddad breaks through his guarded heart. Holt senses she's hiding out here in Eden, Oklahoma. Good choice, because the place comes with her own small-town hero.

Author of more than 90 books, including the Chatam House and Prodigal Ranch series, from Love Inspired, with listing at www.arlenejames.com and www.chatamhouseseries.com.  Can be reached at POB 5582, Bella Vista, AR 72714 or deararlenejames@gmail.com.

A slender forefinger pecked a tiny spot on the map spread out across the table in the little diner. Outside, rain drizzled down in a gloomy, chilly curtain, holding dawn at bay. Weather reports predicted a continuation of the current pattern of rain for northern Oregon, but Cara's concern centered more on what she would find south and west of here as they worked their way steadily toward Oklahoma and... She leaned forward, checking to be certain that her bleary eyes hadn't played her false. Yes, there, right next to Highway 81. Eden.

Her tired gaze backtracked wistfully the equivalent distance of some thirty miles to Duncan, following the tiny line that represented the silver, two-lane ribbon of road. None of the interminable bus trips of her youth had ever taken her farther than Duncan. She'd originally planned to head straight for the town, thinking that she could find no better place to raise her son than that where she had known her happiest times, but then she'd realized that her brother Eddie would almost certainly think to look for her there.

So Eden it would be. Surely she could find sanctuary in a place with that name.

Next to her in a booster seat on the vinyl bench of the booth, her son, Ace, shoved away the remaining bits of buttered toast that remained from their shared breakfast and rubbed his eyes with two tiny, chubby fists before reaching toward her with a whine. Since his fussing the night before had prevented both of them from getting any real sleep, she knew exactly how he felt, but they dared not tarry another night in the Portland area. She hoped to make Boise, Idaho, before dinnertime and find a quiet motel off the beaten path where she and her little son could rest for the night before driving on.

After quickly folding up the map, Cara reached into the diaper bag that also served as her purse and removed several bills from her wallet. She placed the money on the table before sliding out of the booth, tugging on her short denim jacket and reaching for her son. Their clothing had proven no match for the chilly Oregon weather, but her limited funds prevented any but the most basic purchases. They'd just have to make do with layering. Ace, at least, seemed warm.

He laid his pale head on her shoulder as she reached for the diaper bag. She pulled up the hood of his tiny, gray fleece sweater before carrying him out into the fine rain. After belting him securely into his safety seat in the back of the small, greenish coupe for which she'd traded the minivan deemed suitable by her late husband and in-laws, Cara slid behind the wheel.

She would not regret the loss of the GPS guidance system offered by the minivan or bemoan the state of the eight-year-old foreign car with which she'd replaced it. Instead, she told herself sternly to be thankful for the money she'd made from the trade, cash that, if carefully spent, would help her start a new life for herself and her precious son. Ace would grow up in the safety of a small town, cared for by his mother.

Cara started the car and gripped the steering wheel, suddenly beset by fear and doubt. Gulping, she told herself that she could do this. She'd come this far. She could do whatever she must for the sake of her child and a chance to live a normal, healthy life. With a new year but days away, she vowed that a new life would be her true Christmas gift to her child. He deserved a mother who provided him with a warm, supportive, affectionate and loving home. That required a strong woman able to make her own way in the world.

If only she knew how to be that woman.

Panic began to swell. Cara knew that she must find a way to protect and provide for her little son or watch him become another possession of his cold, controlling grandparents. But how? The task suddenly seemed too daunting for a woman on her own. Homeless, all but broke and on the run, how could she possibly give her child the life that he deserved and needed? Somehow, for his sake, she must find a way.

Help me! she cried out silently, wondering if her plea could reach through the great void that she felt. God had never seemed quite real to her, but Cara desperately wanted to believe that He existed, that He cared. She wanted to think that her late, beloved great-aunt had been right, that God noticed her distress and would respond to her prayers.

That was not insane. Was it?

She would not think of insanity or the clinic. She would pray instead, though she didn't really know how. Her aunt had always prayed silently with bowed head and folded hands, but the TV preachers sometimes stood with arms upraised, crying out. Surely something in between would work, as well.

Feeling no calmer but somehow stronger, she sat up a little straighter, looked into the rearview mirror and shifted the transmission into gear. Guiding the little car out onto the rain-washed street, she fixed her gaze on the road ahead. Toward Eden and home.

Holt clicked the mouse and watched a new page open on the computer screen before dropping his gaze back to the ledger on the desktop. His grandfather was right. With the occupancy rate continuing high, the motel seemed to be doing well financially. Should they be forced to sell, and provided Holt could bring himself to ask that of his grandfather, they ought to be able to get a good price for it.

The Heavenly Arms had been Hap Jefford's livelihood, not to mention his home, for longer than the thirty-six years that Holt had been breathing. Hap had sunk his life savings into the place and often remarked that the hospitality industry offered the best of all worlds to a man with, as he put it, "the friendly gene." It also offered a great deal of work, most of which Holt's sister Charlotte had managed until Thanksgiving of this year.

Now, at the very end of December, Holt felt like pulling out his hair in frustration. When he and his brother Ryan had encouraged their sister to follow her heart, which meant relocating to Dallas with the man she loved, they had vastly overestimated their ability to handle the added responsibilities here, or even to hire help. Not a single person had replied to the employment ads they'd placed in area newspapers.

Holt pushed a hand through his sandy brown hair, aware that he needed a haircut, but when was he supposed to find time for that? His brother Ryan, a teacher, coach and assistant principal at the local high school, could not be as available as Holt, who was self-employed as an oil driller. Ryan's many duties at the school meant that Holt had to shoulder the lion's share of the work around here. Motel issues now consumed his days, and his own business interests languished as a result.

He'd intended to have a couple new mineral leases signed before the end of the year so he could keep his crews busy exploring for oil, but New Year's Eve had arrived and he still hadn't moved on either one. Heartily sick of changing beds, he told himself that something had to give, and soon. They—he— had to have help.

Sighing, he dropped his head into his hands and silently went to the one source that had never failed him.

A chime accompanied the sound of the front door opening. Holt quickly finished his prayer and moved from the inner office out into the lobby area.

"Hello," said a breathy female voice as he walked through the door behind the counter.

A pretty little blonde in a closely fitted denim jacket worn over a figure-hugging double layer of yellow and white T-shirts stood before him with a baby on her hip, her golden hair curving in a saucy flip just above her shoulders. Deeply set eyes of a soft, cloudy gray regarded him solemnly from beneath gently arched, light brown brows. A pert nose, apple cheeks and a perfectly proportioned, peach-pink mouth in an oval face completed the picture.

Holt walked to the counter and looked down, far down. She stood more than a foot shorter than his six feet and three-and-one-half inches. Hitching the child, a blond, chubby-faced boy, higher on her hip, she shifted her weight slightly and offered a tentative smile.

"Hello," she repeated, dipping her head.

They had plenty to spare at the moment because of the holiday. The oil field workers who occupied most of the kitchenettes had all gone home to their families, and the truckers who usually filled the smaller units were off the road for the same reason. As a result, only a half-dozen of the twelve units currently held occupants, four by month-to-month renters and two others by out-of-towners visiting friends or family in Eden.

"Umm." The blonde nodded slightly and licked her lips.

"No parties," Holt warned. This being New Year's Eve, he wasn't taking any chances, though something told him he need not be concerned. For one thing, she had a baby with her. For another, she seemed rather shy. He watched her gather her courage.

Holt rocked back on his heels. He'd never experienced instantaneous answer to prayer before. It almost felt unreal.

So perhaps it was.

He narrowed his eyes while she hurried on in a soft voice.

"I—I'm looking for work, preferably something that would let me bring my boy along. Would this job, maybe, let me do that? I have a baby backpack, and he's used to being carried that way. He's quiet most of the time and..." She swallowed. "Look, I learn fast, and I'll work hard."

Holt didn't know whether to smile or scowl. Two minutes ago he'd prayed for help, and now here stood this strange woman, with a child, no less, and obviously desperate. He felt torn between sending he...