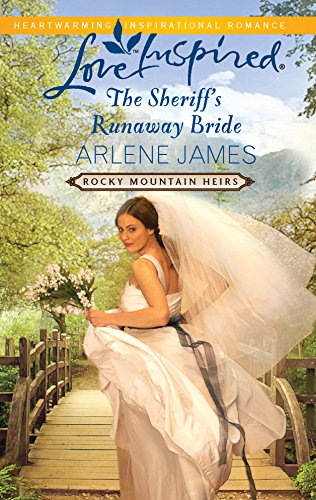 When Kylie Jones catches her fiancé kissing another girl moments before the wedding, she runs. Smack-dab into the new deputy sheriff, who knows her former fiance all too well. Kylie is deeply touched that Zach Clayton understands—more than she ever expected. The handsome cop is in their tiny Colorado town only to fulfill a family obligation, and then he's back to the big city. Unless Kylie can lead her love-shy lawman to the wedding they've both always dreamed of.

Author of more than 90 books, including the Chatam House and Prodigal Ranch series, from Love Inspired, with listing at www.arlenejames.com and www.chatamhouseseries.com.  Can be reached at POB 5582, Bella Vista, AR 72714 or deararlenejames@gmail.com.

"You're a long way from Miami, my friend," newly sworn Deputy Sheriff Zach Clayton muttered to himself, surveying the small, narrow office.

Disorganized and poorly arranged, with dust covering every conceivable surface, it hardly invited confidence. Apparently, his predecessor, Linden Diggers, hadn't filed anything in years. The best thing to do seemed to be to find some boxes in which to store all this detritus. He'd clean as he went along, then rearrange later.

Turning, Zach walked back through the door and past the white sedan bearing the logo and symbol of the county sheriff. The sheriff had promised that the rattletrap would be replaced "next year sometime."

Zach hadn't mentioned that he didn't intend to stay long enough to see that happen. He'd pass the year in Clayton, Colorado, as required by the terms of his grandfather George's will, but after that Zach would be ready to get back to his real life.

At least he prayed he'd be ready.

Plucking his mirrored sunshades from the chest pocket of his forest-green shirt with the Sheriff's Department insignia at the top of each sleeve, Zach slid the glasses onto his face and adjusted the brim of his forest-green ball cap. His khaki pants boasted wide green stripes that ran down the outside of each leg from his waist to the tops of his black western boots.

The uniform felt strange. He'd made detective his fourth year out of academy and had worn plain clothes ever since. Now here he stood in full regalia with a gun on his hip and a utility belt. He'd never expected to wear a uniform again, but then, he'd never expected to return to his hometown either.

From sheer habit, Zach took stock of his surroundings, surveying for activity in the immediate area. Swathed in bunting and American flags in honor of the upcoming Independence Day celebration, the downtown square seemed deserted, despite the two dozen or so cars in the small parking lot to the east of the familiar white clapboard church in the southwest corner of the greensward. Sweeping his gaze across the green, Zach saw that the gazebo, playground and picnic tables remained empty. Across the way, the parking spaces all stood empty in front of the pharmacy, the grocery, and the Cowboy Cafe diner. Even the Hair Today beauty parlor looked abandoned.

Zach turned his attention to Railroad Street, the town's main avenue, which ran east and west. A fat, red hen leisurely strolled beneath the only traffic light in town. Crossing Railroad, it wandered right down the middle of Eagle Street toward him. That meandering fowl seemed quintessential Clayton, Colorado. With a population around nine hundred, the whole town—which had been founded by his great-grandfather, Jim—wasn't much bigger than a good-size chicken coop and about as exciting.

Shaking his head, Zach moved past his black Jeep Wrangler, intending to snag a few boxes from the grocery. As he crossed the street, he caught movement from the corner of his eye. Halting, he turned his head just enough to get a full view. His brown eyebrows went up, arching over the gold rims of his sunshades, as he registered the sight before him.

A bride, white veil flowing out behind her, long skirt belling, ran toward him from the vicinity of the church, bouquet in hand. Zach dipped his chin and pushed down the dark glasses, peering over the rim, just to be certain that the altitude wasn't playing tricks with his sight.

Hot on her heels ran none other than his old nemesis and cousin, Vincent Clayton, dressed in a cheap black suit. Behind him trundled a stocky middle-aged fellow in a tuxedo. Instinctively, Zach strode forward just as Vincent caught up with the bride at the edge of the greensward. Zach didn't know what was going on, but he did know what a bully Vincent was, and the badge pinned to his shirt gave him all the authority he needed to intervene. Smiling grimly, he prepared to perform his first official act as deputy sheriff.

A beefy hand grabbed Kylie Jones's arm, yanking her to a stop.

"Dagnabit, Kylie, hold up!" Vincent bawled, hauling her around to face him.

"Let go!" For emphasis, the bride whacked him in the face with her bouquet, which he then tore from her hand and threw to the ground.

"It was just a kiss!" Vincent yelled, grappling with her.

"Just a last kiss before I become a married man," he wheedled.

Yanking free, Kylie stumbled backward, then began edging closer to the uniformed officer who she'd spied coming out of Linden's old office only moments earlier. Everyone in town knew that they were getting a replacement to man the satellite office of the county sheriff's department now that Linden Diggers had retired, but no one had expected the new guy to show up on a Saturday morning. Conventional wisdom said he wouldn't make it to town until after the Fourth of July holiday. Thank God that had proved wrong!

Livid about her breaking their engagement just minutes before the wedding would have taken place, Vincent had tried to force her into the church. Spying the deputy, she had run instead. Now, with rescue just feet away, she stood her ground.

"Vincent, I heard you! The two of you were obviously together all night. And you were planning to meet her again next weekend!"

He turned on the charm...he was good at that. Pity he wasn't as good at telling the truth. "It was a joke, baby. That's all."

Vincent stood only a half foot taller than her own five-foot-three-inch frame, but he outweighed her by sixty or seventy pounds, all of it muscle. With his spiked blond hair, smooth, lantern jaw and bright blue eyes, he was a better than average-looking man, his features marred only slightly by a somewhat crooked nose. However, she'd been bothered for some time by a sense that Vincent was not all that he seemed, and now she had proof.

"I'm not an idiot, Vincent! I saw what the two of you were doing in that car, and I heard every word you said to her. What I don't understand is why you asked me to marry you if you want to be with her''

He dropped all pretense of innocence, resorting to sneering justification instead. "I was just playing around, Kylie Jeanne. That's what men do. She might not be wife material, but at least she's fun. If you really want to know, she's a hot—"

Kylie slapped him smartly across the face, turning his head sharply to one side. For a long instant, the air seemed to sizzle with the sting of her hand. Then Vincent slowly brought his gaze around, his brow lowered in a thunderous expression of anger.

"You're going to regret that."

"Not as much as I'd regret marrying you!" she snapped, yanking up her skirt with both hands and whirling away.

Thankfully, the deputy had arrived on the scene and stood watching with the silent attention of a laser beam. Long-legged and slim-hipped, he looked to be at least a couple inches over six feet and packed enough upper-body weight to give even Vincent pause. Add the gun on his hip, and he became invincible. Kylie didn't waste an instant deciding to put him between her and her erstwhile fiancé. Zipping around the big man, she plastered herself to the deputy's back. That felt oddly right, not just safe but somehow fitting, almost familiar. She tilted her head, wondering how on earth that could be.

"Hold up!" Zach ordered, keenly aware of the slender, feminine form pressed against him.

The beauty of that slender, oval face with its luscious red lips and clear, moss-green eyes framed by very long, light-golden-brown curls had stunned Zach. At not much taller than five feet she was a slight thing, slender enough to hide completely behind him. The long-fingered hand grasping his arm displayed false, white-tipped fingernails, one of which had been torn loose by her assault on Vincent's cheek. Zach was not inclined to hold either the fake fingernails or the slap against her.

Vincent went on as if she hadn't even spoken. "I'm Vincent Clayton. My great-granddaddy founded this town. This here is just a case of wedding day jitters."

"This here," retorted Kylie Jeanne Jones, practically climbing Zach's back in order to speak over his shoulder, "is me not making the worst mistake of my life by marrying you, Vincent Clayton!"

"We'll just see what your daddy has to say about that!" Vincent growled.

"Her daddy saw and heard you with that woman, too," said the stout fellow, jogging up behind Vincent. He bent forward, palms braced against his knees, and tried to catch his breath, declaring, "No wedding! Not if my girl doesn't want it."

Vincent's face turned ugly. "Oh, yeah? We'll see about that. My grandpa's not going to be happy about this, not one bit, and you know what that means."

Vincent did a double take, staggering back a single step, before sneering, "Well, if it isn't Cousin Zach." He practically spat the name, scraping a scornful look from the insignia affixed to the front of Zach's cap to the rounded toes of his black cowboy boots. "I should've known you'd crawl out of that Miami swamp hole sooner or later."

"Looks like I made it just in time," Zach replied smoothly.

Vincent had put on weight, building up bulging muscles in his chest and arms, but that didn't impress Zach one bit. His own leaner form was not only adequately muscled but well trained. He didn't doubt that he could take down Vincent in a fight, probably in three moves. He planned them in his mind as Vi...