Items related to Inez: A Novel 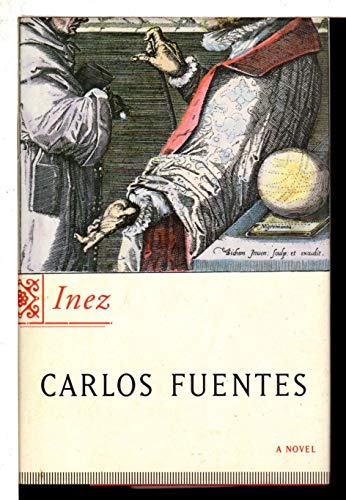 In one of the narratives that comprise this superb new novel from Carlos Fuentes, we are introduced to Gabriel Atlan-Ferrara, a fabled orchestral conductor, and his great love Inez Prada, a renowned singer. In the other, Fuentes memorably delineates the very first encounter in human history between a man and a woman. In one, the intense drama of Berlioz's music for The Damnation of Faust informs the action; in the other, we watch as a slowly emergent love shapes the nature and character of the two protagonists. A beautiful crystal seal -- the meaning of which is a mystery that obsesses Atlan-Ferrara, who owns it -- unites these two narratives; the magical seal allows one to read unknown languages and hear impossible music, and it is the symbol of a shared love.

The duality of Carlos Fuentes's brilliant new novel mirrors two eras, one in the deepest remote time and one in a time to come, but the passions evoked in both, reflected against each other like two sides of a crystal seal, break the limits of time and space and unite in one story. And, like the light refracted through the seal, it begins in prehistory and spirals out into infinity . . .

In Inez, we find Carlos Fuentes at the height of his magical and realist powers. This profound and beautiful work confirms his standing as Mexico's pre-eminent novelist.

From one of the world's greatest writers, this magical new novel weaves together the stories of two couples, two eras, and two grand passions.

Gabriel Atlan-Ferrara, a fabled orchestral conductor, and Inez Prada, a red-haired Mexican diva, are brought together in passion by Berlioz's music for The Damnation of Faust. Meanwhile, the mysterious tale of Neh-el and Ah-nel-the first lovers in human history-unfolds, seductively echoing the Faustian pact of love and death. Linking these narratives is a beautiful crystal seal that belongs to Atlan-Ferrara, its meaning an obsession and its power an enigma. Like the light refracted through the seal, these stories radiate into prehistory and infinity, revealing Carlos Fuentes at the height of his magical and realist powers. Inez, profound and beautiful, confirms his standing as one of the world's preeminent novelists.

"Fuentes is masterful. . . . The effect is a grand, passionate, poetically written book that plays out on the page much as the opera it centers on would play out on the stage."-Orlando Sentinel
"[Inez] is prismatic, structurally risky, at times dangerously melodramatic, overtly Faustian. It offers proof of Fuentes' still hungry and inventive mind."-The Baltimore Sun

Carlos Fuentes is the author of more than a dozen novels as well as several works of nonfiction, and has received many awards, including the Cervantes Prize. Born in Panama, he divides his time between Mexico City and London.

Book Description Farrar, Straus and Giroux, 2002. Hardcover. Condition: New. There is very little shelf wear. The binding is in good shape. The pages of this book are clean and unmarked. A good solid copy. FAST SHIPPING & FREE TRACKING!. Seller Inventory # 178738