The Lunar Men: Five Friends Whose Curiosity Changed the World 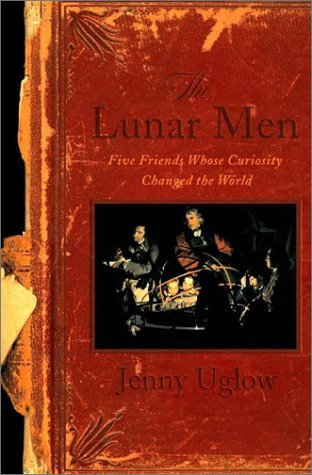 From the celebrated author of Hogarth--An animated, swarming group portrait of the friends who launched the Industrial Revolution

In the 1760s a group of amateur experimenters met and made friends in the English Midlands. Most came from humble families, all lived far from the center of things, but they were young and their optimism was boundless: together they would change the world. Among them were the ambitious toymaker Matthew Boulton and his partner James Watt, of steam-engine fame; the potter Josiah Wedgwood; the larger-than-life Erasmus Darwin, physician, poet, inventor, and theorist of evolution (a forerunner of his grandson Charles). Later came Joseph Priestley, discoverer of oxygen and fighting radical.

With a small band of allies they formed the Lunar Society of Birmingham (so called because it met at each full moon) and kick-started the Industrial Revolution. Blending science, art, and commerce, the Lunar Men built canals; launched balloons; named plants, gases, and minerals; changed the face of England and the china in its drawing rooms; and plotted to revolutionize its soul.

Uglow's vivid, exhilarating account uncovers the friendships, political passions, love affairs, and love of knowledge (and power) that drove these extraordinary men. It echoes to the thud of pistons and the wheeze and snort of engines and brings to life the tradesmen, artisans, and tycoons who shaped and fired the modern age.

In the late 1700s, five gifted inventors and amateur scholars in Birmingham, England, came together for what one of them, Erasmus Darwin, called "a little philosophical laughing." They also helped kick-start the industrial revolution, as Jenny Uglow relates in the lively The Lunar Men: Five Friends Whose Curiosity Changed the World. Their "Lunar Society" included Joseph Priestley, the chemist who isolated oxygen; James Watt, the Scottish inventor of the steam engine; and Josiah Wedgwood, whose manufacture of pottery created the industrial model for the next century. Joined by other "toymakers" and scholarly tinkerers, they concocted schemes for building great canals and harnessing the power of electricity, coined words such as "hydrogen" and "iridescent," shared theories and bank accounts, fended off embezzlers and industrial spies, and forged a fine "democracy of knowledge." And they had a fine time doing so, proving that scholars need not be dullards or eccentrics asocial.

Uglow's spirited look at this group of remarkable "lunaticks" captures a critical, short-lived moment of early modern history. Readers who share their conviction that knowledge brings power will find this book a rewarding adventure. --Gregory McNamee

Jenny Uglow is an editor at Chatto & Windus and lives in Canterbury, England. Her previous books include Hogarth (FSG 1997), Elizabeth Gaskell: A Habit of Stories (FSG 1993), and George Eliot. She is Honorary Visiting Professor at the University of Warwick and a Fellow of the Royal Society of Literature.

1. The Lunar Men: Five Friends Whose Curiosity Changed the World

2. The Lunar Men: Five Friends Whose Curiosity Changed the World