Items related to Great Expectations: The Sons and Daughters of Charles...

Great Expectations: The Sons and Daughters of Charles Dickens 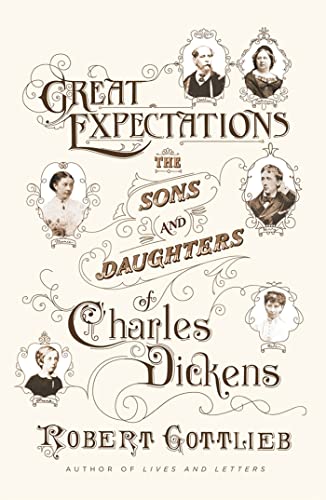 Charles Dickens, famous for the indelible child characters he created―from Little Nell to Oliver Twist and David Copperfield―was also the father of ten children (and a possible eleventh). What happened to those children is the fascinating subject of Robert Gottlieb's Great Expectations. With sympathy and understanding he narrates the highly various and surprising stories of each of Dickens's sons and daughters, from Kate, who became a successful artist, to Frank, who died in Moline, Illinois, after serving a grim stretch in the Royal Canadian Mounted Police.

Each of these lives is fascinating on its own. Together they comprise a unique window on Victorian England as well as a moving and disturbing study of Dickens as a father and as a man.

Robert Gottlieb has been the editor in chief of Alfred A. Knopf and The New Yorker. He is the author of Sarah: The Life of Sarah Bernhard, George Balanchine: The Ballet Maker, and Lives and Letters (FSG, 2011), and is the dance critic for The New York Observer.

Just in time for fireside reading season, Gottlieb (Lives and Letters; Sarah: The Life of Sarah Bernhard) offers this intimate look into the family life of Charles Dickens, the World's Best Worst Father. Gottlieb profiles each of the 10 Dickens children—seven sons and three daughters, one who died in infancy—and includes a chapter on the scandalous possible existence of an 11th child, a son born to Ellen Ternan, Dickens's probable mistress. The book is divided into two separate, chronological sections delineated by Dickens's death in 1870, a structural choice that re-enacts the way in which Dickens held ultimate control over the life narratives of his children, and demonstrates just how large his shadow loomed as both an excellence-demanding father and a disappointment-doling ghost. Life was often bleak for the siblings, who were subject to Dickens's often brutal scrutiny and the life-altering decisions that followed. Gottlieb studs these portraits with artifacts ripe for happy discovery, including excerpts from personal letters and rare photographs. The results are fascinating but often tragic, with each Dickens baby born with more perceived brilliance than the last, only to grow up and reveal a fatal ordinariness to their father. This smart and accessible biography is written in a clever, conversational tone that radiates coziness during even the coldest moments, keeping the pages swiftly turning. (Nov.)

1. Great Expectations: The Sons and Daughters of Charles Dickens

2. Great Expectations: The Sons and Daughters of Charles Dickens