Items related to Naked in Baghdad: The Iraq War as Seen by NPR's...

Naked in Baghdad: The Iraq War as Seen by NPR's Correspondent Anne Garrels 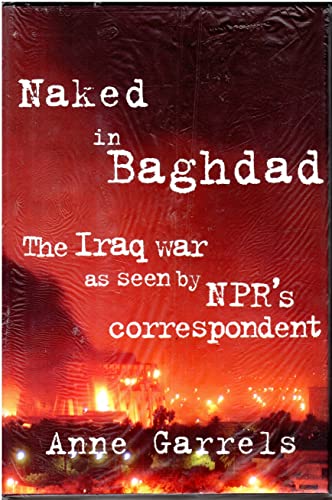 As National Public Radio's senior foreign correspondent, Anne Garrels has covered conflicts in Chechnya, Bosnia, Kosovo, Afghanistan, and elsewhere. She is renowned for direct, down-to-earth, insightful reportage, and for her independent take on what she sees. One of only sixteen un-embedded American journalists who stayed in Baghdad's now-legendary Palestine Hotel throughout the American invasion of Iraq, she was at the very center of the storm. Naked in Baghdad gives us the sights, sounds, and smells of our latest war with unparalleled vividness and immediacy.

Garrels's narrative starts with several trips she made to Baghdad before the war, beginning in October 2002. At its heart is her evolving relationship with her Iraqi driver/minder, Amer, who becomes her friend and confidant, often serving as her eyes and ears among the populace and taking her where no other reporter was able to penetrate. Amer's own strong reactions and personal dilemma provide a trenchant counterpoint to daily events. The story is also punctuated by e-mail bulletins sent by Garrels's husband, Vint Lawrence, to their friends around the world, giving a private view of the rough-and-tumble, often dangerous life of a foreign correspondent, along with some much-needed comic relief.

The result is enthralling, deeply personal, utterly authentic--an on-the-ground picture of the war in Iraq that no one else could have written. As Chicago Sun-Times critic Lloyd Sachs wrote about Garrels's work in Baghdad, "a few choice words, honestly delivered, are worth more than a thousand pictures . . . In your mind's eye, they carry lasting truth."

Anne Garrels began her career in journalism reporting for ABC News in the Soviet Union, Central America, and at the State Department, which she also covered for NBC. Since 1988, she has been a foreign correspondent for NPR, reporting from Russia and the other former Soviet republics, China, Saudi Arabia, Mongolia, Bosnia, Kosovo, Afghanistan, Pakistan, Israel, the West Bank, and most recently, Iraq.

A fellow at the Council on Foreign Relations in 1996-97, she has received Alfred I. duPont-Columbia University and Overseas Press Club awards. She in on the board of the Committee to Protect Journalists. When she is not covering the world's hot spots, she lives in Connecticut with her husband, artist Vint Lawrence, and a menagerie that at last count included three dogs and three cats.

Anne Garrels of National Public Radio was one of only 16 "non-embedded" foreign journalists who remained in Baghdad throughout the 2003 Iraqi War. Her diary-style story about that war is one of the few eyewitness accounts we are likely to have. It's riveting--filled with stories of the surreal Iraqi bureaucracy, noble and devious Iraqis, generous and backstabbing journalists, wrong-headed American politicos, and the fascinating labor of getting the news and getting it out to her listeners. Garrels's confident, warm voice is as suited to reading her own book as it is suited to reporting. She delivers a story full of inflection and emotion without ever becoming overwrought. Her reports are interspersed with the eloquent e-mail reports that her husband, artist Vint Lawrence, sent to friends during Garrels's absence. Lawrence reads stiffly and undoubtedly would have improved with some critiqued practice. Yet, he writes beautifully, and his reports are essential. This is an all-round terrific listen. R.E.K. © AudioFile 2004, Portland, Maine-- Copyright © AudioFile, Portland, Maine

1. Naked in Baghdad: The Iraq War as Seen by NPR's Correspondent Anne Garrels

2. Naked in Baghdad: The Iraq War as Seen by NPR's Correspondent Anne Garrels

3. Naked in Baghdad: The Iraq War as Seen by NPR's Correspondent Anne Garrels

5. Naked in Baghdad: The Iraq War As Seen by National Public Radio's Correspondent

6. Naked in Baghdad: The Iraq War As Seen by National Public Radio's Correspondent