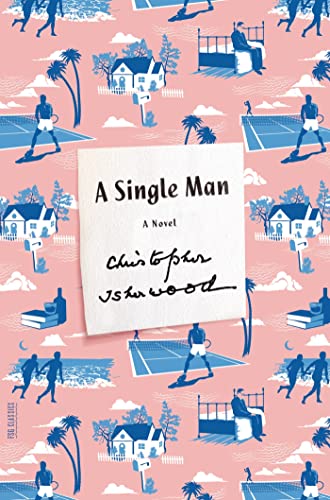 Welcome to sunny suburban 1960s Southern California. George is a gay middle-aged English professor, adjusting to solitude after the tragic death of his young partner. He is determined to persist in the routines of his former life. A Single Man follows him over the course of an ordinary twenty-four hours. Behind his British reserve, tides of grief, rage, and loneliness surge―but what is revealed is a man who loves being alive despite all the everyday injustices.

When Christopher Isherwood's A Single Man first appeared, it shocked many with its frank, sympathetic, and moving portrayal of a gay man in maturity. Isherwood's favorite of his own novels, it now stands as a classic lyric meditation on life as an outsider.

Christopher Isherwood (1904-1986) was born in Manchester, England, and lived in Berlin from 1929 to 1933 and immigrated to the United States in 1939. A major figure in twentieth-century fiction and the gay rights movement, he wrote more than twenty books. FSG Classics presents some of his finest work, including the novels Prater Violet, A Single Man, and A Meeting by the River; the semi-autobiographical Lions and Shadows; and the memoir Christopher and His Kind.

Isherwood's resurrected classic—now a feature film—takes us to Southern California in the 1960s and into one day in the life of George, a gay, middle-aged English professor, struggling to cope with his young lover's tragic death. Simon Prebble's voice is a perfect conduit for Isherwood's lyricism, and he assumes the role of George so naturally and with such raw feeling that listeners will feel as if they are hearing the words straight from the protagonist himself, so beautifully does Prebble create George's reserve behind which surge tides of grief, rage, and bitter loneliness. A University of Minnesota paperback. (Jan.)
Copyright © Reed Business Information, a division of Reed Elsevier Inc. All rights reserved.

Book Description Paperback. Condition: New. Paperback. Shipping may be from multiple locations in the US or from the UK, depending on stock availability. 186 pages. 0.240. Seller Inventory # 9780374533878