Items related to The Power of the Dog

Winslow, Don The Power of the Dog

The Power of the Dog 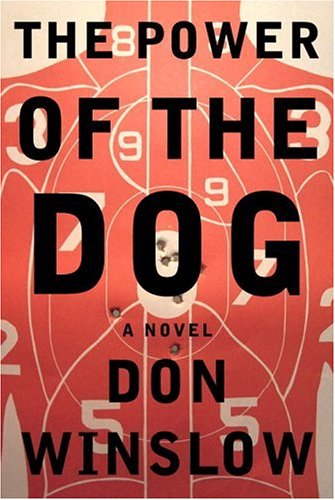 From Don Winslow (“A writer so good you almost want to keep him to yourself”—Ian Rankin), an electrifying new novel of love and revenge, politics and influence, corruption and honor. Moving at breakneck speed, it tells a riveting, sometimes harrowing story set in the shifting nexus of power among the Latin American drug cartels, the American mob, and the U.S. government.

Spanning the years from the rise of the Mexican drug Federación in the 1970s to the Iran-Contra affair in the 1980s to the vicious drug wars of the 1990s, the action ranges from Manhattan’s Hell’s Kitchen and the halls of Washington to the streets of Tijuana and the deserts of the American Southwest.

The players: a DEA agent, a drug lord, a call girl, a hit man, a priest. Caught up in the war on drugs, willingly or not, each is trying to escape the sins of the past while negotiating the treacherous currents of the present. Their seemingly disparate lives—taking shape on one side of the law or the other, or straddling both—slowly converge as they struggle to overcome, in any way possible, the “power of the dog.”

From the jungles of Latin America to the vicious netherworld of the California–Mexico border, this is the war on drugs you haven’t seen—its devastations and deliriums, its alliances and betrayals, its pawns and kings.

A masterpiece of epic storytelling, The Power of the Dog is Don Winslow at the very top of his form.

Don Winslow has worked as a private investigator in London, New York City, and elsewhere in the United States, and as a consultant to law firms and insurance companies for more than fifteen years.

Only in hell, Art Keller thinks, do flowers bloom fire.

Art sits on a ridge above the burning valley. Looking down is like peering into a steaming soup bowl—he can’t see clearly through the smoke, but what he can make out is a scene from hell.

Hieronymus Bosch does the War on Drugs.

Campesinos—Mexican peasant farmers—trot in front of the flames, clutching the few possessions they could grab before the soldiers put the torch to their village. Pushing their children in front of them, the campesinos carry sacks of food, family photographs bought at great price, some blankets, some clothes. Their white shirts and straw hats—stained yellow with sweat—make them ghost-like in the haze of smoke.

Except for the clothes, Art thinks, it could be Vietnam.

He’s half-surprised, glancing at the sleeve of his own shirt, to see blue denim instead of army green. Reminds himself that this isn’t Operation Phoenix but Operation Condor, and these aren’t the bamboo-thick mountains of I Corps, but the poppy-rich mountain valleys of Sinaloa.

Art hears the dull bass whop-whop-whop of helicopter rotors and looks up. Like a lot of guys who were in Vietnam, he finds the sound evocative. Yeah, but evocative of what? he asks himself, then decides that some memories are better left buried.

Choppers and fixed-wing planes circle overhead like vultures. The airplanes do the actual spraying; the choppers are there to help protect the planes from the sporadic AK-47 rounds fired by the remaining gomeros—opium growers—who still want to make a fight of it. Art knows too well that an accurate burst from an AK can bring down a chopper. Hit it in the tail rotor and it will spiral down like a broken toy at a kid’s birthday party. Hit the pilot, and, well . . . So far they’ve been lucky and no choppers have been hit. Either the gomeros are just bad shots, or they’re not used to firing on helicopters.

Technically, all the aircraft are Mexican—officially, Condor is a Mexican show, a joint operation between the Ninth Army Corps and the State of Sinaloa—but the planes were bought and paid for by the DEA and are flown by DEA contract pilots, most of them former CIA employees from the old Southeast Asia crew. Now there’s a tasty irony, Keller thinks—Air America boys who once flew heroin for Thai warlords now spray defoliants on Mexican opium.

The DEA wanted to use Agent Orange, but the Mexicans had balked at that. So instead they are using a new compound, 24-D, which the Mexicans feel comfortable with, mostly, Keller chuckles, because the gomeros were already using it to kill the weeds around the poppy fields.

So there was a ready supply.

Yeah, Art thinks, it’s a Mexican operation. We Americans are just down here as “advisers.”

The American War on Drugs has opened a front in Mexico. Now ten thousand Mexican army troops are pushing through this valley near the town of Badiraguato, assisting squadrons of the Municipal Judicial Federal Police, better known as the federales, and a dozen or so DEA advisers like Art. Most of the soldiers are on foot; others are on horseback, like vaqueros driving cattle in front of them. Their orders are simple: Poison the poppy fields and burn the remnants, scatter the gomeros like dry leaves in a hurricane. Destroy the source of heroin here in the Sinaloan mountains of western Mexico.

The Sierra Occidental has the best combination of altitude, rainfall and soil acidity in the Western Hemisphere to grow Papaver somniferum, the poppy that produces the opium that is eventually converted to Mexican Mud, the cheap, brown, potent heroin that has been flooding the streets of American cities.

There hasn’t been an actual condor seen in Mexican skies in over sixty years, longer in the States. But every operation has to have a name or we don’t believe it’s real, so Condor it is.

Art’s done a little reading on the bird. It is (was) the largest bird of prey, although the term is a little misleading, as it preferred scavenging over hunting. A big condor, Art learned, could take out a small deer; but what it really liked was when something else killed the deer first so the bird could just swoop down and take it.

We prey on the dead.

Death from the Sky.

And here I am, crouched in the brush again, shivering in the damp mountain cold again, setting up ambushes.

Except the target now isn’t some VC cadre on his way back to his village, but old Don Pedro Áviles, the drug lord of Sinaloa, El Patrón himself. Don Pedro’s been running opium out of these mountains for half a century, even before Bugsy Siegel himself came here, with Virginia Hill in tow, to nail down a steady source of heroin for the West Coast Mafia.

Siegel made the deal with a young Don Pedro Áviles, who used that leverage to make himself patrón, the boss, a status he’s maintained to this day. But the old man’s power has been slipping a little lately as some young up-and-comers have started to challenge his authority. The law of nature, Art supposes—the young lions eventually take on the old. Art has been kept awake more than one night in his Culiacán hotel room by the sound of machine-gun fire in the streets, so common lately that the city has gained the nickname Little Chicago.

Well, after today, maybe they won’t have anything to fight about.

Arrest old Don Pedro and you put an end to it.

And make yourself a star, he thinks, feeling a little guilty.

Art is a true believer in the War on Drugs. Growing up in San Diego’s Barrio Logan, he saw firsthand what heroin does to a neighborhood, particularly a poor one. So this is supposed to be about getting drugs off the streets, he reminds himself, not advancing your career.

But the truth of it is that being the guy to bring down old Don Pedro Áviles would make your career.

Which, truth be told, could use a boost.

The DEA is a new organization, barely three years old. When Richard Nixon declared a War on Drugs, he needed soldiers to fight it. Most of the new recruits came from the old Bureau of Narcotics and Dangerous Drugs; a lot of them came from various police departments around the country, but not a few of the early start-up draft into the DEA came from the Company.

Art was one of these Company Cowboys.

That’s what the police types call any of the guys who came in from the CIA. There’s a lot of resentment and mistrust of the covert types by the law enforcement types.

Shouldn’t be, Art thinks. It’s basically the same function—intelligence gathering. You find your assets, cultivate them, run them and act on the intelligence they give you. The big difference between his new work and his old work is that in the former you arrest your targets, and in the latter you just kill them.

Operation Phoenix, the programmed assassination of the Vietcong infrastructure.

Art hadn’t done too much of the actual “wet work.” His job back in Vietnam was to collect raw data and analyze it. Other guys, mostly Special Forces on loan to the Company, went out and acted on Art’s information.

They usually went out at night, Art recalls. Sometimes they’d be gone for days, then reappear back at the base in the small hours of the morning, cranked up on Dexedrine. Then they’d disappear into their hooches and sleep for days at a time, then go out and do it again.

Art had gone out with them only a few times, when his sources had produced info about a large group of cadres concentrated in the area. Then he’d accompany the Special Forces guys to set up a night ambush.

He hadn’t liked it much. Most of the time he was scared shitless, but he did his job, he pulled the trigger, he took his buddies’ backs, he got out alive with all his limbs attached and his mind intact. He saw a lot of shit he wishes he could forget.

I just have to live with the fact, Art thinks, that I wrote men’s names down on paper and, in the act of doing so, signed their death warrants. After that, it’s a matter of finding a way to live decently in an indecent world.

But that fucking war.

Like a lot of people, he watched the last helicopters taking off from Saigon rooftops on television. Like a lot of vets, he went out and got good and stinking drunk that night, and when the offer came to move over to the new DEA, he jumped at it.

He talked it over with Althie first.

And now, Art thinks as he sits and waits for Don Pedro to show up, we might be close to doing it.

His legs ache from sitting still but he doesn’t move. His stint in Vietnam taught him that. The Mexicans spaced in the brush around him are likewise disciplined—twenty special agents from the DFS, armed with Uzis, dressed in camouflage.

Tío Barrera is wearing a suit.

Even up here in the high brush, the governor’s special assistant is wearing his trademark black suit, white button-down shirt, skinny black tie. He looks comfortable and serene, the image of Latino male dignity.

He reminds you of one of those matinee idols from an old ’40s movie, Art thinks. Black hair slicked back, pencil mustache, thin, handsome face with cheekbones that look like they’re cut from granite.

Eyes as black as a moonless night.<...