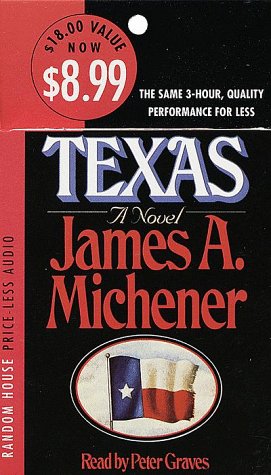 "A book about oil and water, rangers and outlaws, Anglos and Hispanics, frontier and settlement, money and power...James Michener is something rare and valuable: an honorable craftsman doing honorable work....He manages to make history vivid and palatable to the reader."
THE BOSTON GLOBE
Texas. A land of sprawling diversity and unparalleled richness; a dazzling chapter in the history of our nation, a place like no other on earth. Through the remarkable lives of four families, this epic saga spans four centuries and two continents and charts the dramatic formation of several great dynasties from the age of the conquistadors to the present day. A richly compelling novel of a proud people eager to meet the challenge of the land, TEXAS is James Michener's most magnificent achievement.
From the Paperback edition.

“A book about oil and water, rangers and outlaws, frontier and settlement, money and power . . . James Michener is something rare and valuable: an honorable craftsman doing honorable work. . . . He manages to make history vivid.” —The Boston Globe

“A sweeping panorama of regional history done in the form of a novel.”—The Washington Post Book World
From the Trade Paperback edition.

James A. Michener was one of the world’s most popular writers, the author of more than forty books of fiction and nonfiction, including the Pulitzer Prize–winning Tales of the South Pacific, the bestselling novels The Source, Hawaii, Alaska, Chesapeake, Centennial, Texas, Caribbean, and Caravans, and the memoir The World Is My Home. Michener served on the advisory council to NASA and the International Broadcast Board, which oversees the Voice of America. Among dozens of awards and honors, he received America’s highest civilian award, the Presidential Medal of Freedom, in 1977, and an award from the President’s Committee on the Arts and Humanities in 1983 for his commitment to art in America. Michener died in 1997 at the age of ninety.

Book Description Random House Audiobooks, 1999. AUDIO CASSETTE. Condition: Good. 2 AUDIO CASSETTE EDITION. We will test each cassette prior to shipping for reliable sound. You will receive a worthwhile set. Enjoy this AUDIO CASSETTE PERFORMANCE for your home and library. Audio Book. Seller Inventory # 010720201407108