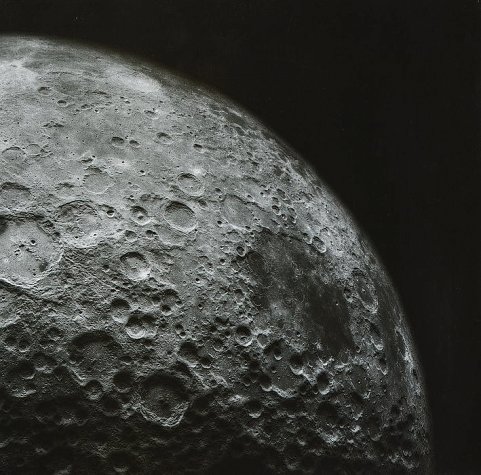 The most thrilling of all journeys--the missions of the Apollo astronauts to the surface of the Moon and back--yielded 32,000 extraordinarily beautiful photographs, the record of a unique human achievement. Until recently, only a handful of these photographs had been released for publication; but now, for the first time, NASA has allowed a selection of the master negatives and transparencies to be scanned electronically, rendering the sharpest images of space that we have ever seen. Michael Light has woven 129 of these stunningly clear images into a single composite voyage, a narrative of breathtaking immediacy and authenticity that begins with the launch and is followed by a walk in space, an orbit of the Moon, a lunar landing and exploration, and a return to Earth with an orbit and splashdown.

Graced by five 45-inch-wide gatefolds that display the lunar landscape, from above the surface and at eye level, in unprecedented detail and clarity, Full Moon conveys on each page the excitement, disorientation, and awe that the astronauts themselves felt as they were shot into space and then as they explored an alien landscape and looked back at their home planet from hundreds of thousands of miles away.

Published on the thirtieth anniversary of Apollo 11--the first landing on the Moon--this remarkable and mesmerizing volume is, like the voyages it commemorates and re-creates, an experience both intimate and monumental.

In Full Moon, one of the best science photography books ever published, Michael Light presents a voyage in images to the Moon and back. Light took NASA's master negatives of photos taken by Apollo astronauts and scanned them electronically. The resulting pictures are so vivid they seem more clear than real life. Light orders the photos sequentially, selecting the most arresting images from each mission, to create a truly cinematic experience. In the first section, depicting blastoff, you can almost feel the violent shaking of the rocket as it strains to escape Earth's gravity. Then you see the quiet stillness of weightlessness, the astronauts' view down at a perfectly silent Earth, boundless oceans contrasting with bright white clouds. A spacewalk adds vertigo--the astronaut looks fragile and very alone as he floats outside his capsule far above his home planet. Then comes the waiting, as the long voyage toward the Moon continues.

As you watch the cratered surface get closer and closer, you have no sense of scale until you see the miniscule silver and gold lander dropping gently to land on the Moon. Leaving the cluttered interior of the capsule in bulky, awkward suits, the astronauts bring delicate tracings of color--gold on the lander; red, white, and blue on the spacesuits' flag patches--to this black-and-white world. Five huge gatefolds in this section give you indescribable views of the intricately scarred surface of the Moon.

You return to space for the reuniting of the lander and capsule, and a repetition of the tedious journey back home. Finally, you watch a chaotic splashdown in the riot of colors that is Earth.

A nice section in the back of the book explains each photo with a detailed caption, and an essay by author Andrew Chaikin (A Man on the Moon) adds more written context to this stunning visual experience. The book is printed on very high-quality paper, with matte black frames for the photos and a gorgeous, wordless cover. Every space fan should have a copy. --Therese Littleton

Michael Light is an artist and photographer based in San Francisco. His work is in the collections of The Center for Creative Photography and the San Francisco Museum of Modern Art. His photo-novel, Ranch, was published in 1994.

Andrew Chaikin, who contributed an essay to this volume, is the author of the definitive study of the Apollo missions, A Man on the Moon (1994), which was the basis of the award-winning television series From the Earth to the Moon.