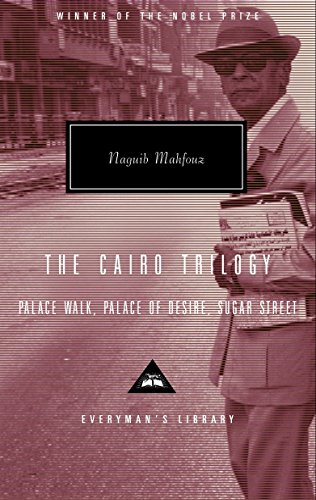 Naguib Mahfouz’s magnificent epic trilogy of colonial Egypt appears here in one volume for the first time. The Nobel Prize—winning writer’s masterwork is the engrossing story of a Muslim family in Cairo during Britain’s occupation of Egypt in the early decades of the twentieth century.

The novels of The Cairo Trilogy trace three generations of the family of tyrannical patriarch Al-Sayyid Ahmad Abd al-Jawad, who rules his household with a strict hand while living a secret life of self-indulgence. Palace Walk introduces us to his gentle, oppressed wife, Amina, his cloistered daughters, Aisha and Khadija, and his three sons–the tragic and idealistic Fahmy, the dissolute hedonist Yasin, and the soul-searching intellectual Kamal. Al-Sayyid Ahmad’s rebellious children struggle to move beyond his domination in Palace of Desire, as the world around them opens to the currents of modernity and political and domestic turmoil brought by the 1920s. Sugar Street brings Mahfouz’s vivid tapestry of an evolving Egypt to a dramatic climax as the aging patriarch sees one grandson become a Communist, one a Muslim fundamentalist, and one the lover of a powerful politician.

Throughout the trilogy, the family’s trials mirror those of their turbulent country during the years spanning the two World Wars, as change comes to a society that has resisted it for centuries. Filled with compelling drama, earthy humor, and remarkable insight, The Cairo Trilogy is the achievement of a master storyteller.

Naguib Mahfouz was born in Cairo in 1911 and began writing when he was seventeen. His nearly forty novels and hundreds of short stories range from re-imaginings of ancient myths to subtle commentaries on contemporary Egyptian politics and culture. Of his many works, most famous is The Cairo Trilogy, consisting of Palace Walk (1956), Palace of Desire (1957), and Sugar Street (1957), which focuses on a Cairo family through three generations, from 1917 until 1952. In 1988, he was the first writer in Arabic to be awarded the Nobel Prize in Literature. He died in August 2006.

Book Description Hardcover. Condition: New. Hardcover. (Book Jacket Status: Jacketed)Naguib Mahfouz's magnificent epic trilogy of colonial Egypt appears here in one volume for the first time. The Nobel Prize?winning writer's ma.Shipping may be from multiple locations in the US or from the UK, depending on stock availability. 1368 pages. 1.220. Seller Inventory # 9780375413315