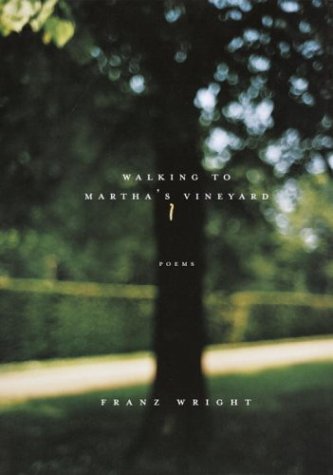 In this radiant new collection, Franz Wright shares his regard for life in all its forms and his belief in the promise of blessing and renewal. As he watches the “Resurrection of the little apple tree outside / my window,” he shakes off his fear of mortality, concluding “what death . . . There is only / mine / or yours,– / but the world / will be filled with the living.” In prayerlike poems he invokes the one “who spoke the world / into being” and celebrates a dazzling universe–snowflakes descending at nightfall, the intense yellow petals of the September sunflower, the planet adrift in a blizzard of stars, the simple mystery of loving other people. As Wright overcomes a natural tendency toward loneliness and isolation, he gives voice to his hope for “the only animal that commits suicide,” and, to our deep pleasure, he arrives at a place of gratitude that is grounded in the earth and its moods.

Franz Wright was born in Vienna in 1953 and grew up in the Northwest, the Midwest, and Northern California. His most recent works include The Beforelife (which was a finalist for the Pulitzer Prize) and Ill Lit: Selected & New Poems. He has been the recipient of two National Endowment for the Arts grants, a Guggenheim Fellowship, a Whiting Fellowship, and the PEN/Voelcker Prize, among other honors. He works at the Edinburg Center for Mental Health and the Center for Grieving Children and Teenagers and lives in Waltham, Massachusetts, with his wife, Elizabeth.

And the ocean smells like lilacs in late August–how
is that.

The light there muted (silver) as remembered light.

Do you have any children?

No, lucky for them.

Bad things happen when you get hands, dolphin.

Can you tell us a little bit about your upbringing?

There is no down or up in space or in the womb.

If they’d stabbed me to death on the day I was born, it
would have been an act of mercy.

Like the light the last room, the windowless room at the
end, must look out on. Gold-tinged, blue

vapor trail breaking up now like the white line you see,
after driving all day, when your eyes close;

vapor trail breaking up now between huge clouds resembling
a kind of Mt. Rushmore of your parents’ faces.

And these untraveled windy back roads here–cotton
leaves blowing past me, in the long blue
horizontal light–

if I am on an island, how is it they go on forever.

This sky like an infinite tenderness, I have caught
glimpses of that, often, so often, and never yet have
I described it, I can’t, somehow, I never will.

How is it that I didn’t spend my whole life being happy, loving
other human beings’ faces.

And wave after wave, the ocean smells like lilacs in
late August.