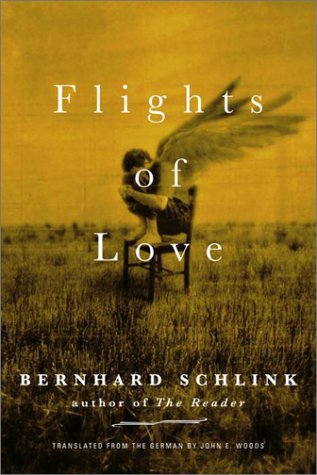 From the internationally best-selling author of The Reader, here is a collection of stories that weave themselves around the idea of love—love to seek and love to flee; love as desire, as guilt, as confusion or self-betrayal; love as habit, as affair, and as life-changing rebellion.

As his myriad fans know from The Reader, Bernhard Schlink’s power as a storyteller resides in his cool compassion and in the intelligence that he wields like a laser to penetrate human motives and human behavior. Here his subject is not history but the heart itself, and with the forensic delicacy of a master he lays bare the essence of our feelings.

Already an enormous success in the author’s native Germany, Flights of Love is certain to be celebrated, discussed, read and re-read.

Flights of Love sees Bernhard Schlink build on the success of his international bestselling debut novel, The Reader, with a clutch of short stories that tell of the variety of love, distilled into seven splinters of narrative. The pick of the seven, the opening "Girl with Lizard," depicts a remote male character who fixates on a painting of his father's, which he is to discover, like his father, has a familiarly unsavory past, and which he is impelled to exorcise. In the book's centerpiece, "Sugar Peas," architect and amateur painter Thomas finds that his trio of lovers avenge themselves on his profligacy after he is left wheelchair-bound by an accident. "The Other Man" presents a widower corresponding with his dead wife's unwitting lover, and finding comfort through acquaintance. Less successfully, "The Circumcision" sees the pretext of a German man and his New York Jewish girlfriend to ponder huge, chewy rhetoric on the problems of reconciling the past, almost absentmindedly concocting an improbable denouement. Schlink too often presents scenarios rather than scenes, more intent on dislocated dilemma than language. In keeping with his legal training, he discerns lines of attack more suited to a drama, or perhaps a courtroom drama, than fiction. There can be no doubting Schlink's storytelling acumen or his undertaking to tackle the complicated identity of modern Germany. What is increasingly exposed, though, are the supporting mechanisms that too frequently serve to reinforce, rather than challenge, our assumptions with their didactic contrivance. --David Vincent, Amazon.co.uk

“If there is a renaissance in the art of storytelling, this is it.” — Der Spiegel

“Seven well-crafted stories filled with existential suspense and as timeless as they are completely of-the-moment . . . pieces of prose that carry the power of a force of nature.” — Saarbruecker Zeitung

“Schlink is a brilliant storyteller who steers events to their end with a jurist’s clarity and measured mind. These pieces are as perfect as small plays.” — Focus (Germany)

“In Flights of Love Bernhard Schlink as a storyteller proves himself to be our archaeologist of emotions. He digs until he locates the sore point of our present-day world. It is a gripping, bold performance.” — Süddeutsche Zeitung