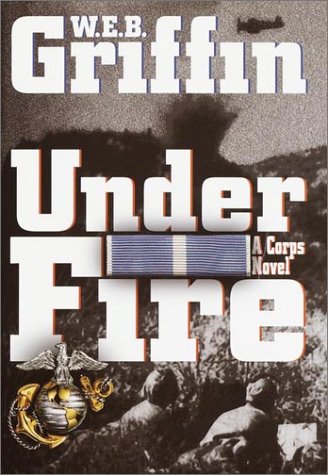 Griffin takes his Marine heroes to Korea, in the biggest Corps novel of them all.

Through eight books, Griffin's bestselling chronicle of the Marine Corps has proven itself to be one of the country's most enduring and popular series. Now, Griffin leaves World War II behind and thrusts his readers deep into the heart of the Korean War.

June 1, 1950: Captain Ken McCoy's report on probable North Korean hostilities meets with so much bureaucratic displeasure that not only is it promptly suppressed, but McCoy himself is kicked out of the Corps. At least two outfits, however, are not impressed by such infighting: the fledgling CIA, which promptly hires McCoy, and the North Koreans, who on June 25th invade across the 38th parallel. Immediately, veterans scattered throughout military and civilian life are called up, many with only 72 hours' notice. Fleming Pickering and his daredevil son Malcolm, Ed Manning, George Hart, Jack Stecker, Jake Dillon, Ernie Zimmerman - for them and their sweethearts and wives, names such as Inchon, Pusan, and the Choisin Reservoir will acquire a new, bloody reality, and Korea will become not only a new battlefield...but their greatest challenge of all.

Filled with the crackling realism, adventure, and rich characters that are his hallmarks, Under Fire is further proof, as Tom Clancy says, that "W.E.B. Griffin is a storyteller in the grand tradition."

Having wrapped up World War II with 1999's In Danger's Path, bestselling military author W.E.B. Griffin now deploys his Marines in Korea with Under Fire, the ninth volume in his Corps series. Back are familiar characters from Griffin's previous Corps books--daredevil pilot Pick Pickering, his Scotch-sipping father, Brigadier General Fleming Pickering, Capt. Ken "Killer" McCoy, and Master Gunner Ernie Zimmerman--with historical figures including President Harry Truman and General Douglas MacArthur making appearances as well. It's now 1950, and with Communist forces making their presence felt below the 38th Parallel, Griffin's plot centers on Gen. Pickering, now high up in the newly created CIA, and Ken McCoy as they work behind MacArthur's back to covertly pave the way for an invasion of North Korea.

Readers who crave nonstop battle action and excitement may find it hard to stick with Under Fire, as Griffin takes the time to detail the background leading up to one of America's least-remembered modern wars. Griffin writes for the true armed forces aficionado, filling his prose with realistic descriptions of procedure, gear, and materials, an alphabet's worth of acronyms, and an ex- soldier's ear for military dialogue. Look for more sharp, authentic writing in this series' next installment. --Benjamin Reese

W.E.B. Griffin is also the author of the bestselling Brotherhood of War, Men at War, Badge of Honor, and Honor Bound series. He lives in Alabama.

UNDER FIRE: A CORPS NOVEL (RANDO