Items related to The Plains of Passage (Earth's Children)

The Plains of Passage (Earth's Children) 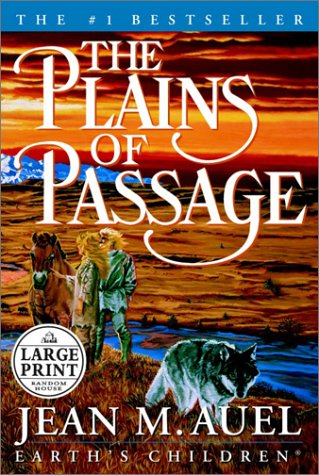 Jean M. Auel’s enthralling Earth’s Children® series has become a literary phenomenon, beloved by readers around the world. In a brilliant novel as vividly authentic and entertaining as those that came before, Jean M. Auel returns us to the earliest days of humankind and to the captivating adventures of the courageous woman called Ayla.

With her companion, Jondalar, Ayla sets out on her most dangerous and daring journey--away from the welcoming hearths of the Mammoth Hunters and into the unknown. Their odyssey spans a beautiful but sparsely populated and treacherous continent, the windswept grasslands of Ice Age Europe, casting the pair among strangers. Some will be intrigued by Ayla and Jondalar, with their many innovative skills, including the taming of wild horses and a wolf; others will avoid them, threatened by what they cannot understand; and some will threaten them. But Ayla, with no memory of her own people, and Jondalar, with a hunger to return to his, are impelled by their own deep drives to continue their trek across the spectacular heart of an unmapped world to find that place they can both call home.
From the Trade Paperback edition.

"Thrilling... This magical book is rich in details of all kinds... but it it the depth of the characters' emotional lives... that gives the novel such a stranglehold."
--Cosmopolitan

JEAN M. AUEL is an international phenomenon. Her books have sold 34 million copies worldwide. Her extensive research has earned her the respect of archaeologists and anthropologists around the world. She lives with her husband, Ray, in Oregon, where she is at work on the next book in the Earth’s Children® series.

1. The Plains of Passage (Earth's Children)

2. The Plains of Passage (Earth's Children)

3. The Plains of Passage (Earth's Children)

Book Description Random House Large Print, 2002. Condition: Good. A+ Customer service! Satisfaction Guaranteed! Book is in Used-Good condition. Pages and cover are clean and intact. Used items may not include supplementary materials such as CDs or access codes. May show signs of minor shelf wear and contain limited notes and highlighting. Seller Inventory # 0375431780-2-4