Items related to My Movie Business: A Memoir

My Movie Business: A Memoir 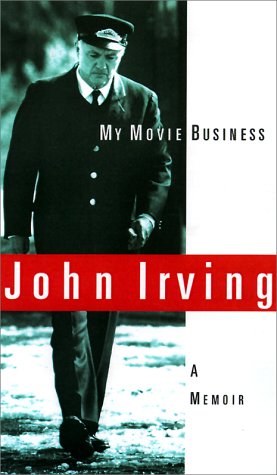 We fully guarantee all orders and gladly accept returns for any reason.

John Irving's novels pose tantalizing challenges to filmmakers: at his best, Irving has proven both popular and ambitious, crafting rich, picaresque fiction that juggles Big Themes and antic comedy, braiding his central narratives with intriguing subplots and discursive back stories driven by vivid characters. Irving's accessibility teases the would-be director or producer with the prospect of commercial acceptance even as the scope and intricacy of his work raises crucial risks for the scriptwriter. With two early novels that made it to the screen, The World According to Garp and The Hotel New Hampshire, Irving's box office impact thus far evenly translates to hit and miss.

This slender memoir offers a perceptive, if hardly objective, critique of the inherent differences between novels and screenplays, with the writer sharing his own experiences creating both. Irving focuses principally on his crusade to bring The Cider House Rules to the screen, tracing its gestation through four successive directors; with Irving himself attached as scriptwriter, we see the novelist struggling to reconcile the demands of concision against his paternal instincts toward the original book. Written before the final cut of The Cider House Rules, My Movie Business often verges on self-justification. Irving's respect for the movie's ultimate caretaker, Swedish director Lasse Hallstrom, is evident, as is his hopeful enthusiasm for the project's casting (which includes Michael Caine, Tobey McGuire, Jane Alexander, and Charlize Theron). Yet Irving can't repress the wariness prompted by his earlier disappointments with both this and other novels.

Ultimately, such candor doesn't diminish the account's value as a post mortem of the creative process behind serious filmmaking, nor does it overpower the reliable grace of Irving's prose. Fans will also find My Movie Business revealing in its exploration of the inspiration behind The Cider House Rules and its eloquent stance against the antiabortion movement--Irving's own grandfather, a leading doctor, administrator, and Harvard professor of obstetrics and gynecology. But moviegoers, as well as those who haven't read Irving's original novel, should be forewarned that this memoir does reveal key plot elements of both. --Sam Sutherland

After two producers, four directors, thirteen years, and uncounted rewrites, the movie version of John Irving's acclaimed novel The Cider House Rules at last made it to the big screen, winning two Academy Awards (including one to John Irving for Best Adapted Screenplay). Here is the author's account of the novel-to-film process. Anecdotal, affectionate, and delightfully candid, My Movie Business dazzles with Irving's incomparable wit and style.