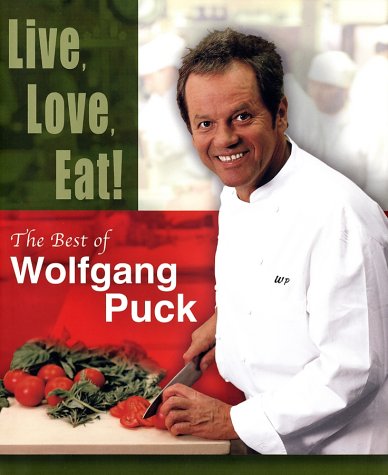 The legendary Wolfgang Puck has created his most comprehensive, delectable, and easy-to-use cookbook yet. Live, Love, Eat! takes its title from his signature catchphrase, which sums up his exuberant approach to cooking and entertaining. Featuring more than 125 of his favorite dishes, this book is an indispensable compilation of the simple, sumptuous recipes from Puck’s world-renowned repertoire.

Live, Love, Eat! contains recipes for appetizers such as Puck’s acclaimed Crab Cakes with Sweet Red Bell Pepper Sauce; a variety of seasonal soups and salads, including his famed Chinois Chicken Salad; and, along with innovative pasta and risotto recipes, the California-style pizzas that first made Puck and his original Spago Hollywood a favorite of international celebrities. Puck also serves up all manner of main courses, including seafood recipes such as Lobster Imperial in Black Bean Sauce; poultry dishes such as Pan-Roasted Chicken Breasts Stuffed with Bell Peppers with Sweet Green Onion Sauce; and meat recipes such as Wolfgang’s Bacon-Wrapped Meat Loaf and Rack of Pork with Caramelized Maple Onions. To round out the collection, he offers a wide variety of vegetable and other side-dish recipes, plus spectacular desserts, including Decadent Warm Chocolate Cupcakes with Molten Centers and Classic Spago Cheesecake. A section covering basics, sauces, and techniques provides invaluable guidance for beginning and experienced cooks alike.

Illustrated throughout with more than 150 color images of finished dishes and close-up how-to shots demonstrating key techniques and tips, this stunning book is a must-have for cooks who share Puck’s passion for fresh, interesting ingredients and creative recipes.

Wolfgang Puck's enthusiasm for good food could light up several small cities, and you'll find the proof on the pages of Live, Love, Eat! The Best of Wolfgang Puck. In 150 of his favorite recipes Wolfgang Puck demonstrates why and how flavorful food and fun can't be separated from each other--certainly not in his kitchen.

Consider the ubiquitous guacamole recipe. Puck calls his version California Guacamole. His ingredients are few, the flavors marshaling around roasted whole garlic, which adds to the whole an underlying sweet and mellow deliciousness. It's an act of elevation and restoration for one of the grand treats of the Southwest. Puck is a master of the respectful tweaking of familiar recipes and ingredients in favor of rejuvenation and flavor. The lowly chicken comes to mind. Chicken pot pie becomes Chicken Pot Pie Soup, Puck replacing the traditional crust with delicate dumplings. With Spicy Chicken Pizza (the chicken is marinated in lime juice, olive oil, garlic, cilantro, and minced jalapeño chilies) Puck takes this Neapolitan standard on a side trip to Mexico. Viener Backhendl, Austrian fried chicken, meets Asia by way of panko, Japanese-style bread crumbs. And so on.

Live, Love, Eat! has chapters devoted to appetizers, soups, salads, pizza and pasta, seafood, poultry, meat, accompaniments, and desserts. This is a richly illustrated book showing what results look like and how they get there. A final chapter, "Basics," is worth the price of admission. --Schuyler Ingle

Wolfgang Puck is chef and owner of a number of celebrated restaurants, including Spago restaurants in the Los Angeles area, Chinois in Santa Monica, Postrio in San Francisco and Las Vegas, and Granita in Malibu. Puck is the star of his own Emmy Award–winning television show on the Food Network, and appears regularly on ABC’s Good Morning America. He is the author of Wolfgang Puck’s Pizza, Pasta, and More!, Adventures in the Kitchen, The Wolfgang Puck Cookbook, and Wolfgang Puck’s Modern French Cooking for the American Kitchen. The winner of three James Beard awards, among numerous other honors, he is one of the most renowned chefs of our time. Puck and his wife, Barbara Lazaroff, live in Los Angeles with their two sons.