Items related to Ladysmith: A Novel 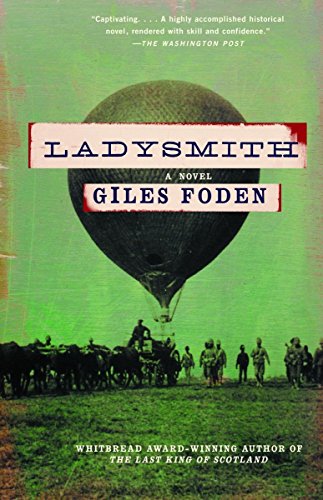 From the author of the Whitbread Award—winning The Last King of Scotland, comes a spellbinding tale of a town under siege in colonial Africa and a young woman who finds love and freedom in the midst of a devastating war.

The year is 1899, and the South African town of Ladysmith is surrounded by Boer forces. For four long months bread is thickened with laundry starch and soldier’s horses are killed for meat; daily bombings destroy homes and businesses, forcing the town’s inhabitants into tunnels and makeshift shelters; and soldiers and townspeople alike are hideously wounded by flying shrapnel. As the world she knows collapses around her, Bella Kiernan finds the courage to escape from convention, to rebel against the political forces that threaten her homeland and to pursue her life’s greatest romance. Ladysmith is a magnificent love story, a vivid portrait of war, and clear confirmation of Giles Foden’s standing as a formidably talented novelist.

In the dying days of the 19th century, the world's eyes turned to the small South African town of Ladysmith, whose inhabitants spent 118 days besieged by Boer forces while waiting for General Buller's army. Giles Foden tells his tale through a host of characters. There's the Irish hotelier Leo Kiernan and his daughters, Bella and Jane; the barber Antonio Torres, from Portuguese East Africa; the various British war correspondents, including a young Winston Churchill; the Indian stretcher bearers, among them Mohandas Gandhi; a Zulu named Muhle Maseku, his wife, Nandi, and their son, Wellington; and two young English soldiers, Tom and Perry Barnes, whose letters home--in which straightforward description approaches the surreal--were inspired by those of Foden's great-grandfather. Early on, Perry and his fellows capture one woman hiding in a farmhouse:

When we got to her, she was crouched in a shed with her arms round a goose. Seeing us approach, she buried her head in its feathers and started crying. As we surrounded her, she kept repeating something in Dutch. An African scout who spoke the language said what she was saying was: "Leave me my man-goose! Do not take my man-goose! Do not hurt my man-goose!" We had to take her in of course, but we let her keep the goose. As she was a farmer, I felt sorry for her, but they have plenty of our fellows in Pretoria, so there.

Ladysmith is a busy book, and it's not always clear what's going on. But that's Foden's point. At heart it is a novel about the writing of history, set on the verge of modernity, where old ways of assessing the truth are being cruelly questioned. So correspondent George Steevens still reads his Greek historians and Gibbons, while his messages are being sent (and censored) by the newfangled heliograph. "Sieges are out of date," Steevens realizes. "To the man of 1899 ... with five editions of the evening papers every day, a siege is a thousandfold a hardship. We make it a grievance nowadays if we are a day behind the news--news that concerns us not at all!" With such pressures to provide news, news, news, it's no surprise when the correspondents end up producing the Ladysmith Lyre, full of fake news. And on the margins, there's the unnamed Biographer, eschewing words in favor of visual images with his Biograph, but soon finding that he too can't tell the whole story.

In its considerable range and ambition--Churchill and Gandhi's encounter prefiguring events of the 1940s, Bella's personal rebellion standing in for the advance of women, the place of Ireland in Britain's colonial plans, Wellington's experiences informing his work with the ANC--Ladysmith sometimes falls short. But in his battle scenes and evocation of the town's drawn-out suffering, Foden is very good, producing some startling images: the town's mockingbirds, for instance, "take to imitating the whine and buzz of shells." This is never anything less than a fascinating, ambitious novel, and to see a young author taking on the huge question of how to write history is inspiring indeed. --Alan Stewart

“Ladysmith is a haunting, disturbing novel–not only about how things were in a long-forgotten war, but how that war made us what we are.”–The Independent