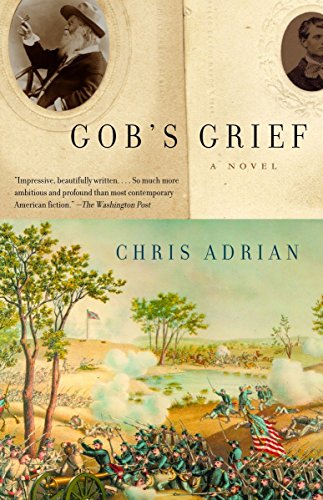 In the summer of 1863, Gob and Tomo Woodhull, eleven-year-old twin sons of Victoria Woodhull, agree to together forsake their home and family in Licking County, Ohio, for the glories of the Union Army. But on the night of their departure for the war, Gob suffers a change of heart, and Tomo is forced to leave his brother behind. Tomo falls in as a bugler with the Ninth Ohio Volunteers and briefly revels in camp life; but when he is shot clean through the eye in his very first battle, Gob is left to endure the guilt and grief that will later come to fuel his obsession with building a vast machine that will bring Tomo–indeed, all the Civil War dead–back to life.
Epic in scope yet emotionally intimate, Gob’s Grief creates a world both fantastic and familiar and populates it with characters who breath on the page, capturing the spirit of a fevered nation populated with lost brothers and lost souls.

Review:
Unlike many a novelist, Chris Adrian isn't intimidated by history. Indeed, he treats historical events as raw material, to be reshaped and reconfigured through the processes of the imagination. It's an endeavor that would please Walt Whitman, one of the central characters in this challenging debut, Gob's Grief. Nor is the good gray poet the only "real" character--both Abraham Lincoln and radical feminist Victoria Woodhull put in appearances, giving an extra twist of verisimilitude to Adrian's rendering of America circa 1863, where the Civil War rages and the dead proliferate like weeds.

Gob's Grief opens with the story of Tomo, the fictional son of Woodhull. At age 11, he dreams of escaping Homer, Ohio, to join the fighting. Unable to convince his twin brother, Gob, to accompany him, Tomo finally sets out alone and is promptly killed by a bullet through the skull. His twin never recovers from this loss. In thrall to his grief, Gob grows up to become a doctor, dedicating himself to healing the war's wounded. And by night, he toils away at a more unlikely corrective: a time machine that will eradicate death and bring back all the lost soldiers. His sidekick in this project is none other than Whitman, who shares his desire to resurrect those millions of departed souls: "Their marvelous passion would go out from them in waves, transforming time, history, and destiny, unmurdering Lincoln, unfighting the war, unkilling all the six hundred thousand."

Gob's Grief is an ambitious and occasionally convoluted story, which remains true to the stubborn mysticism of thinkers like Whitman and Woodhull. Cutting back and forth between characters and historical moments, Adrian never pretends to retrospective detachment. Indeed, his novel will appeal to fans of John Dos Passos or E.L. Doctorow--writers who borrow from history but repay their debt in the form of fictional insight. --Ellen Williams

From the Back Cover:
“Impressive.... So much more ambitious and profound than most contemporary American fiction.” –The Washington Post

“A masterpiece of retrospective mythology.... Adrian hasn’t just reimagined or reenacted this time of national crisis; he’s managed to relive it through his characters.”–Walter Kirn, GQ

“Remarkable.... Utterly different. A work unlike any that has come before it.”–The Economist

“Unlike many first time novelists, Adrian takes great risks here. He brings to life scores of historical figures, from Walt Whitman to Abe Lincoln, with a startling ease and grace. More remarkable, however, is his ability to inspire sympathy for–even faith in–Gob’s mission.” –Time Out New York

“Remarkable . . . utterly different. A work unlike any that has come before it.” –The Economist