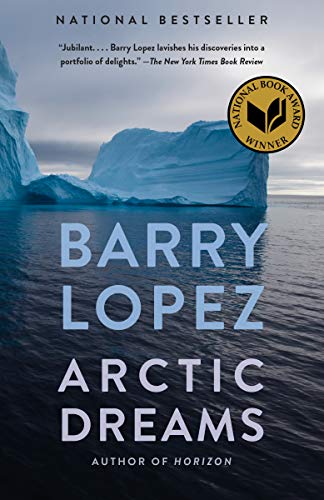 This bestselling, groundbreaking exploration of the Far North is a classic of natural history, anthropology, and travel writing.

The Arctic is a perilous place. Only a few species of wild animals can survive its harsh climate. In this modern classic, Barry Lopez explores the many-faceted wonders of the Far North: its strangely stunted forest, its mesmerizing aurora borealis, its frozen seas. Musk oxen, polar bears, narwhal, and other exotic beasts of the region come alive through Lopez’s passionate and nuanced observations. And, as he examines the history and culture of the indigenous people, along with parallel narratives of intrepid, often underprepared and subsequently doomed polar explorers, Lopez drives to the heart of why the austere and formidable Arctic is also a constant source of breathtaking beauty, beguilement, and wonder.

Written in prose as memorably pure as the land it describes, Arctic Dreams is a timeless mediation on the ability of the landscape to shape our dreams and to haunt our imaginations.

Based on 15 extended trips to the Canadian far north over a five-year period, Arctic Dreams celebrates the mysteries of what documentarians fondly call "last frontiers." Such places are everywhere in danger of destruction in the interest of ever-elusive economic progress, but Lopez writes no jeremiads. Instead, he aims to foster a kind of learned understanding of wild places, in this case the vast, scarcely knowable northern landscape. Writing of the natural history of the Arctic and its inhabitants--narwhals, polar bears, beluga whales, musk oxen, and caribou among them--Lopez draws powerful lessons from the land and imparts them assuredly and gracefully. Arctic Dreams deservedly won a National Book Award in 1986 when it was first published.

Lopez offers a thorough examination of this obscure world-its terrain, its wildlife, its history of Eskimo natives and intrepid explorers who have arrived on their icy shores. But what turns this marvelous work of natural history into a breathtaking study of profound originality is his unique meditation on how the landscape can shape our imagination, desires, and dreams. Its prose as hauntingly pure as the land it describes, Arctic Dreams is nothing less than an indelible classic of modern literature.

Arctic Dreams : Imagination and Desire in a Northern Landscape

Arctic Dreams: Imagination and Desire in a Northern Landscape (Paperback or Softback)